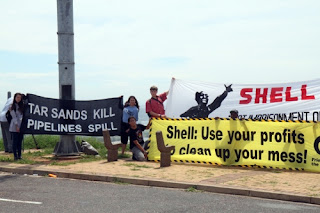 DURBAN, South Africa -- In Durban, Canada and the United Kingdom, Indigenous activists and their supporters targeted Shell today for violating agreements made with Indigenous communities in Canada. In Durban, site of the ongoing UN climate talks, activists from Canada joined activists from Africa to denounce Shell and their repeated violations of human rights and environmental regulations. Appearing outside a Shell refinery, a number of Indigenous activists joined with youth from Canada and Africa to support the community of Athabasca Chipewyan First Nation (ACFN), who recently announced their lawsuit against Shell.

"Shell has left a trail of broken promises and ravaged eco-systems.  They have been pushing their dirty fossil fuels plans on every country they can bully. It's time to stand up and say get the Shell out of there, we don't want your broken promises anymore," declared Eriel Deranger, a community member of ACFN and director of Sierra Club Prairies. 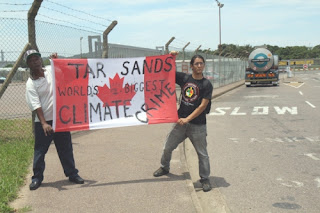 "We're drawing the line, and taking a strong stand against Shell. ACFN wants no further developments until Shell is brought to justice and our broader concerns about the cumulative impacts in the region are addressed," stated Allan Adam, Chief of ACFN.

"The destructive tar sands operations by Shell and other big oil companies are destroying the land and violating our people's rights to hunt, trap and fish. Canada is a willing partner in these crimes and other human rights abuses caused by fossil fuels and climate change," noted Daniel T'seleie, an Indigenous youth from northern Canada, and a member of the Canadian Youth Delegation.

"Shell has a history of devastation across the African continent that we are well aware of. Our peoples and our environments have been turned into a colony for companies like Shell, who profit from our suffering. Knowing full well the extent of brutality that Shell has delivered to my fellow Nigerians, we stand in solidarity with our brothers and sisters in Canada standing up to say 'get the Shell out of here'," emphasized Nnimmo Bassey, director of Environmental Rights Action (Nigeria) and winner of the Alternative Nobel Prize. 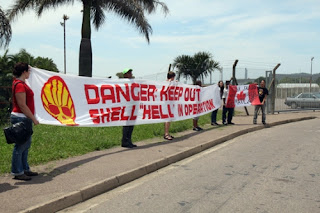 "Ironically, Durban, the site of this year's international climate talks, has struggled against the aging Shell refinery that is the symbol of climate change and environmental injustice. Shell has been responsible for crimes against local citizens, where refinery accidents are common and where rusting pipelines have leaked more than 1 million litres of petrol. We strictly oppose plans to bring Tar Sands oil to South Africa, and agree that Shell must be held accountable for its violations against communities," claimed Bobby Peek, director of Groundwork in Durban.

"We are here in Durban to look for climate solutions, meanwhile countries like Canada are promoting dirty oil from the Tar Sands, backed by large corporations like Shell. While our communities are suffering from the impacts of climate change, groups like Shell have been found to be lobbying governments to weaken their positions. This has to be the time when we begin to hold companies and countries alike responsible for their actions against our communities," declared Tom Goldtooth, director of the Indigenous Environmental Network in North America.

All photos by Jeff Conant/GJEP