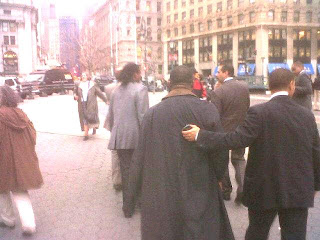 Rodríguez’s press secretary David Segal confirmed that the councilman was arrested, but could not say if he was in any way injured. Segal, however, heard from fellow Councilman Jumaane Williams that Rodriguez was bleeding from above one of his eyes.
Rodriguez arrived down at Zuccotti Park around 1:00 a.m. shortly after hearing reports that police had entered the park to shut down the encampment, Segal told Fox News Latino.
The NYPD said Rodriguez was arrested at Vesey St. and Broadway about 2 a.m.
Read more: http://latino.foxnews.com/latino/news/2011/11/15/occupy-wall-street-nyc-councilman-ydanis-rodriguez-arrested-in-zuccotti-park/#ixzz1doGmaXRk
New York Civil Liberties Union: "If you have been a victim to or witnessed New York Police Dept. misconduct, tell us what happened at protest@nyclu.org Also journalists arrested were asked to contact them.