This article has been updated on Censored News:
http://bsnorrell.blogspot.com/2011/11/tar-sands-action-native-americans-to.html


WASHINGTON – The battle over the Keystone XL tar sands pipeline will reach a decisive moment today  when nearly 10,000 people are expected to join hands around the White House and show President Obama he has the support he needs to stand up to Big Oil and stop the pipeline.

This week, President Obama took full ownership over what has become the most important environmental question facing him before the 2012 election: whether or not to grant the necessary permit for a 1,700 mile pipeline which would carry toxic tar sands oil from Canada to the Gulf of Mexico. 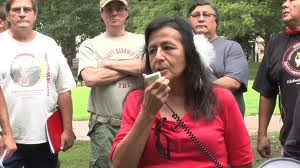 Lakotas: NO to TarsandsDebra White Plume, Lakota from Pine Ridge, S.D., sent a strong message to Obama and TransCanada to halt the Keystone XL pipeline that threatens the Ogallala Aquifer and water supplies in the heartland and Indian country.

"Oglala Lakota say, 'Stay away from our water!" White Plume said, pointing out the resolution of the Oglala Sioux Executive Committee. It demands that the US "immediately cease and desist any negotiations and plans to construct the Keystone XL Pipiline Across the Mni Wiconi Water Pipeline easement."

White Plume encouraged events throughout North America, including the gathering in the San Francisco Bay Area in Oakland on Sunday to oppose the Tar Sands. "I will be standing in solidarity with all of you in Washington DC with thousands of others as we surround the White House to let Obama know we don't want him to approve this disaster! Stand with us."

The Sierra Club plans live web coverage at 2 pm Eastern:
http://action.sierraclub.org/site/PageNavigator/20111010_Nov6_TarSandsRallyRSVP.html
The White House Today
Who: Nearly 10,000 people and top environmental leaders and celebrities, including actor Mark Ruffalo, activist Bill McKibben, Sierra Club executive director Mike Brune, Medal of Freedom recipient and NRDC founder John Adams, Nobel Prize recipient Jody Williams, and more.
Where: Lafayette Square Park across from the White House
When: Spokespeople will be available for interviews between 1:00 – 2:00 pm, opening rally begins at 2:00 pm, crowd will encircle the White House from 3:00 – 4:30 pm, closing rally begins at 5:00 pm.
Why: President Obama is currently considering whether or not to grant a “presidential permit” for the controversial Keystone XL tar sands pipeline. The project requires the special permit because it crosses an international border with Canada. The Keystone XL would carry tar sands oil, the dirtiest fuel on the planet, over 1,700 miles across America’s heartland, risking a BP-style oil spill over one of our largest sources of fresh drinking water. America’s top climate scientist says that fully exploiting the tar sands could mean “essentially game over for the climate.” This August, 1,253 people were arrested during a sit-in at the White House protesting the pipeline.
DC Contacts:
Jamie Henn, 415-601-9337, jamie@tarsandsaction.org
Daniel Kessler, 510-501-1779, danieljkessler@gmail.com

San Francisco Bay Protest
Wish you could be in DC this Sunday to encircle the White House?
You can still be part of the movement here in the Bay Area!

On Sunday, November 6, join our friends at 350.org Bay Area to converge at the Obama for America Office in Oakland and show solidarity with Tar Sands Action in Washington, DC. Along with simultaneous rallies taking place in Seattle, Los Angeles, and more, the Bay Area will demonstrate that the West Coast stands with our friends encircling the White House! We can't all be in DC this Sunday, but we can all stand up where we are and tell President Obama that Americans across the country say NO! to the Keystone XL Pipeline.

Please click on the "Select Guests to Invite" button on the left and spread the word to all your Bay Area contacts! Our goal is to encircle the entire OFA building. See you Sunday!

I.CU.FREE said…
Wish we could have been there with you all. Unfortunately we have little funding to make a trip such as this. Appreciate what people are doing to stand with Grandmother Earth. We keep you all in my prayers. May Creator make a way for us to join you on the front lines. May Creator bless you all.
November 6, 2011 at 9:28 AM