A Walk around Occupy Tucson photos 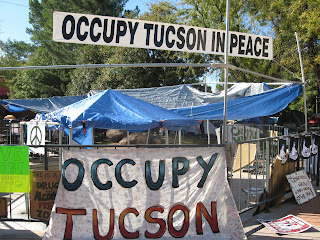 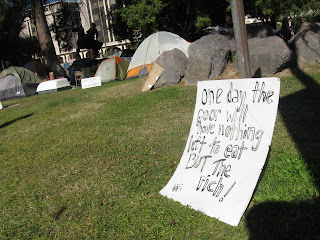 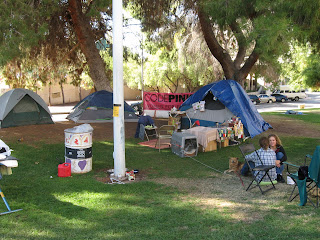 Photos by Brenda Norrell Censored News
A walk around Occupy Tucson this morning, where there are more than 50 tents in the heart of downtown Tucson. Signs carry the messages to end the war and stop the corporate greed. The center sign says: "One day the poor will have nothing left to eat but the rich."
Meanwhile, in the Tucson region, people are struggling with massive unemployment, home foreclosures, bankruptcies and the targeting of people of color by federal immigration agents.
Declaration of Occupy Tucson
Passed Nov. 12 by the General Assembly

As we gather in solidarity to express a feeling of mass injustice, we must not lose sight of what has brought us together.
As one people, united, we acknowledge the reality that the status quo is unacceptable, and that our political and economic institutions, both corporate and governmental, are failing us; that the corruption of our system has undermined our rights, and it is now up to us, the people, to re-found those rights, and expand upon them. We assert that legitimate institutions derive their power from the people, and, therefore, as the people overwhelmingly reject the monopoly of power exercised by both government and transnational corporations, and in particular large financial corporations and the military-industrial complex, that their power is illegitimate; and that no true democracy is attainable when the process is determined by political and economic power, or when the rule of power trumps the rule of law.
We have peaceably assembled here, as is our right, to let these facts be known:
We will not tolerate discrimination in the workplace, or in our governmental institutions, or within our own movement based on age, race, sex, class, gender identity, sexual orientation, developmental ability, physical ability, religious belief, and non-belief.
We condemn and consider illegitimate the acquisition of houses through an illegal foreclosure process by banks and other financial firms.
We condemn and consider illegitimate the massive bailouts that have been passed by Congress on terms unacceptable to the majority of Americans.
We condemn the media's performance in keeping people misinformed and fearful. We condemn governmental and corporate*** manipulation of the media for the purpose of spreading disinformation and concealing incriminating or embarrassing information.
We recognize that financial corruption and failure are practiced with impunity under the slogan “Too Big To Fail.” In the midst of their devastating failures, we condemn the rewarding of massive bonuses to financial executives and elites.
We condemn the pressure to limit workers'–including migrant workers'–pay and access to healthcare in order to inflate profits, and overcompensate managers and executives. We demand the recognition of workers' rights as human rights.
We oppose the systemic orientation of outsourcing more and more jobs, and condemn its use to exert further pressure on workers.
We condemn the scapegoating of the poor, and in particular the scapegoating of immigrants, including those who enter the US, often out of desperation, illegally.
We will not tolerate the torture, confinement, and cruel treatment of nonhuman animals, and we condemn those who actively hide these practices.
We condemn the "structural adjustment" policies of the IMF, WTO, World Bank, et al. which have disrupted and degraded developing economies throughout the world. Consequently, we demand the forgiveness of the crushing debts imposed by the above bodies.
We condemn the use of legal teams, lobbyists, and other means to circumvent the spirit of our laws.
We condemn the universal commodification of our culture.
We condemn the practice of blocking generic forms of medicine that could save people’s lives in order to protect investments that have already turned a substantial profit.
We condemn the execution of persons, and oppose the privatization of prisons.
We condemn colonialism in all its forms.
We condemn torture, and we condemn dismissing the killing of civilians as “collateral damage”.
We condemn the creation of weapons of mass destruction, and the profits derived from their creation.
We demand accountability to the people and will not tolerate corruption in government and transnational corporations.
We demand the dissolution of the legal absurdity of corporate personhood.
We demand deeper investment in alternative, renewable forms of energy, and condemn policies that keep us unsustainably dependent on oil and other fossil fuels.
We demand the conversion of the perpetual war economy into an economy that supports peace and sustainability.
We demand accountability of transnational corporations that have purposely covered up oil spills, accidents, faulty bookkeeping, and faulty products—endangering lives and health—in pursuit of profit.
We demand the recognition of a worker's right to negotiate for better pay and safer working conditions, and the right to negotiate in association with other workers.
We demand a reevaluation of the food supply—including a reevaluation of agribusiness and federal food policies and subsidies—with an emphasis on correcting negligence and dissolving monopolies.
We demand the end of all privatization of the commons such as water, seeds, genetic materials, et al.
We demand education as a right, and we condemn massive student debts as an abridgment of that right.
We demand publicly-financed campaigns, and condemn the use of money to buy disproportionate and undue influence in government.
We demand the end of the revolving-door lobby system between Congress and corporations.
We demand instant-runoff voting to supplant the winner-take-all system in elections . We demand transparency in the tabulating of ballot returns.
*This list is not all-inclusive and may be amended at any time by consensus of the General Assembly.
We, the Occupy Tucson General Assembly, are asserting our first amendment rights, as well as our power as citizens. We are peaceably assembled; occupying public space; creating a process to address the problems we face, and generating solutions accessible to everyone.
To all communities that take action and form groups in the spirit of direct democracy, we offer support and resources.
Join us and make your voices heard!
at November 16, 2011 No comments:

We’re getting our first report back from the folks who went to the Sanitation Garage. Mayor Bloomberg’s office tweeted : “Property from #Zuccotti, incl #OWS library, safely stored @ 57th St Sanit Garage; can be picked up Weds” But it turns out, not surprisingly, that this was a lie. Our folks on the ground say:

“There are only about 25 boxes of books; many of the books are destroyed. Laptops here but destroyed. Can’t find tent or shelves.”

One of our librarians Zach came up with a partial list of what was taken and it’s looking like only a few books and our (destroyed) laptops were at Sanitation. So Mayor Bloomberg: where is the People’s Library?

Between 2,000 and 4,000 books (we’ll know if it looks right when we see it ), this includes five boxes of “Reference” materials many of which were autographed by the authors;
Our custom made “OWS library stamps;”
5 (4?) laptop computers;
Our wifi device;
miscellaneous paper supplies;
A round portable table;
a rectangular portable table;
6 metal shelves (five of which had been set up in two pieces);
three sets of wooden drawers;
a periodicals spinning rack;
Approximately 60 plastic tubs/bins of varying sizes (most small, but several big);
archival materials (I was starting to collect some stuff in the library);
posters (including many original posters created by OWS participants);
two lamps;
four solar lights;
7 (or so) chairs;
a wooden dinner table (that was our’s right?);
periodicals/newspapers/zines (not counted in our book total);
our awesome tent;
signage;
personal belongings of librarians;
at November 16, 2011 No comments: