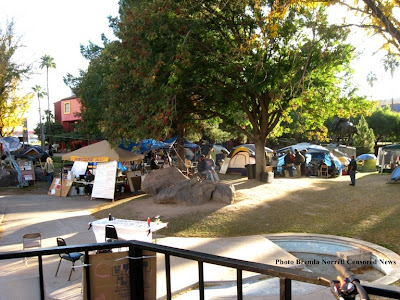 By Brenda Norrell
CENSORED NEWS
TUCSON -- It was a happy Thanksgiving at Occupy Tucson, where several turkeys and all the trimmings rolled in from the good folks of Tucson on Thursday afternoon. "I even had pumpkin pie," said one of the men, as yet another car arrived with more turkey and goodies. One woman brought fresh baked chocolate chip cookies, still warm.
Occupy Tucson, located in the heart of downtown, is surrounded by courthouses, banks, cafes and the infamous downtown library. One block to the south is the FBI building, where for years protests against the war have been held every Thursday. A few blocks to the east is the shrine where migrants who have died crossing the Sonora Desert are remembered one night each week.
Back over at Occupy Tucson, one of the signs on the busy street corner, says, "I do have a job!" Another series of signs reminds people, if they are going to yell out of their car windows, to be creative. Other signs point to the corporate theft of America.
Meanwhile, Occupy Tucson peacekeepers maintain their mellow style of keeping the peace here.
Tucson police are citing and field releasing occupiers each night, without taking them in to jail. However, the ultimate fines are mounting up.
Still, it was one more really good day to Occupy Tucson.

ALCATRAZ -- On Censored News Blogtalk Radio today, AIM confounder Clyde Bellecourt speaks on Alcatraz, where thousands gathered at dawn to honor the original occupation of Alcatraz. Bellecourt shares prophecies and points out  that every day is a day of thanks, a day of thanksgiving.
Bellecourt says the elders have told him that the American Indian Movement was foretold in prophecies, which described how they would come dressed in red and "bring back the drum."
Native American elders also said this day would be a time for the unity of the people from the north with the people of the south who would do away with borders.
Bellecourt remembered Ted Means, brother of Bill Means and Russell Means, who passed to the Spirit World yesterday.
Bellecourt was in San Francisco for the AIM West Coast Conference this week, hosted by AIM West.
Thanks to KPFA Berkeley for sharing the broadcast on Radio Free Alcatraz.
Listen to Bellecourt's 10 minute talk:
http://www.blogtalkradio.com/brenda-norrell/2011/11/24/clyde-bellecourt-on-alcatraz-2011
at November 24, 2011 No comments: