Owe Aku International Justice Project is sending a delegation to the 3rd UN Seminar on Treaties Agreements and Other Constructive Arrangements at United Nations Headquarters in Geneva from July 16-17, 2012.  The delegation will be led by the Eyapaha of the Black Hills Sioux Nation Treaty Council, Alex White Plume.  The Itancan of the Black Hills Sioux Nation Treaty Council is Chief Oliver Red Cloud.
We would like to reach out to other treaty nations about your plans for the Treaty Seminar.  We also thought it might be valuable if we had an opportunity to discuss alliances and present a common front on recommendations that include mechanisms within the UN system, as well as the use of an advisory opinion on the International Court of Justice, for treaty resolution.  If this would be of interest, please let us know and we can try and create a space for us to talk.
For your review and comment we are attaching a background paper on the historical recommendations of the Treaty Seminars as well as other comments concerning treaty resolution issues.
Prior to July 6th, we will distribute a draft of our Treaty Seminar paper in the hopes of positive support from the brothers and sisters of nations that stand upon their treaties.  In addition to treaty nations, it is crucial that non-treaty nations recognize that ignoring treaties with self-determined Indigenous nations is the same as ignoring all of the rights set out in the declaration.  When they attempt to dismiss our treaties, they will also attempt to dismiss any of the other rights contained in the Declaration.
Document: http://www.scribd.com/doc/97316025/3rd-UN-Seminar-on-Treaties-by-Matt-With-Kent-Edits
Thank you.
Kent Lebsock
Director
Owe Aku International Justice Project
for Lakota Treaty Justice & Advocacy
oweakuinternational@me.com
646-233-4406
646-395-1617 (fax)

on the web at www.oweakuinternational.org
"Either stand with the people or with the colonists. It's not really that complicated."
3rd UN Seminar on Treaties by Matt With Kent Edits
at June 16, 2012 No comments: 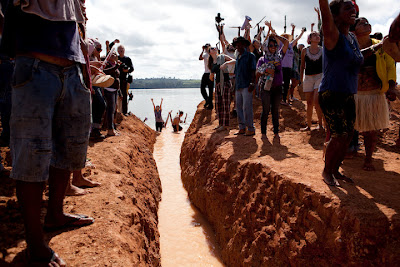 Three hundred indigenous people, small farmers, fisherfolk, and local residents occupied the Belo Monte Dam project, removing a strip of earth to restore the Xingu's natural flow and "freeing the river." Participants gathered in formation spelling out the words "Pare Belo Monte" meaning "Stop Belo Monte" to send a powerful message about the devastating impacts of the dam on the eve of the UN Rio+20 Summit. Their message is that projects that destroys livelihoods and the environment and that violate indigenous rights cannot be called "Clean Energy". They are demanding the cancellation of the $18 billion Belo Monte dam project.
Photo Mitchell anderson
https://picasaweb.google.com/amazonwatchmedia/AmazonianCommunitiesOccupyTheBeloMonteDamSiteToFreeTheXinguRiver#5754314474903524594
at June 16, 2012 No comments:


Corporations Confronted for Roles in Snowbowl Human Rights Violations
Call to Action: Call-in! Don’t Give-in! Week June 18 - 22
﻿
By James Kennedy
protectpeaks@gmail.com
http://www.protectthepeaks.org/
French translation:
http://www.chrisp.lautre.net/wpblog/?p=810
﻿﻿FLAGSTAFF, AZ – On June 15, 2012, more than 20 Flagstaff community members holding banners and signs delivered a letter to RSC Equipment Rentals and their parent company, Stronger United, requesting an immediate halt of construction and withdrawal of their contracts with Arizona Snowbowl.
﻿﻿The actions taken today are part of a coordinated effort to address contractors complicit in Arizona Snowbowl’s destruction and desecration of the San Francisco Peaks.  Similar letters were delivered to Towsley Welding & Construction in Big Bear, CA and to High Desert Investment Company in Flagstaff, AZ.
﻿ Toby Manuelito, 10-year-old Diné youth, read aloud a letter of demands after management refused to meet with him. As he read the community's statement, Toby and the other community members were rudely interrupted and verbally harassed by employees. Toby chanted as he left the building, “When our human rights are under attack, what do we do? Stand up fight back!”
After presenting a letter requesting RSC and Stronger United’s support for human rights in Northern Arizona, community members gathered on the sidewalk, holding banners and chanting. An employee approached the group requesting they leave the area, and then made a number of racist remarks, demanding the group that if they were so concerned about sanitation, they should “go back to the reservation and tell everyone to clean their yards.” The employee then pushed Toby Manuelito before leaving.
Flagstaff resident James Kennedy stated, “It is shocking to receive such a hostile and disrespectful response from this well known company. I guess its no surprise that a company furthering Snowbowl’s efforts would make such a racist remark about indigenous people to Diné children.”
A representative of RSC Equipment Rentals (Stronger United) identified Snowbowl as the company’s “biggest client.” Much of the equipment and heavy machinery used in Snowbowl’s construction operations has been supplied by RSC, a nationwide corporation.
Leslynn Williams, Dine’ mother, stated, “ It’s important that we continue to fight for our sacred Holy mountain, our future generations depend on our efforts to protect the Peaks. Today, our culture and mother earth are under attack on all levels by greedy corporations, from the stripping away of our water rights by corporations like Salt River Project, Navajo Generating Station, to the desecration of our sacred sites. We have to take a stand now and take action today.”
at June 16, 2012 No comments: