Mining companies now hiring contract snipers with assault weapons -- with scopes and silencers -- in Wisconsin and Arizona -- just as in Guatemala.

Update: The contract snipers have been removed in Wisconsin because they were not licensed in the state, but will return after licensing, NBC reports.

The exposure of heavily-armed masked guards around a mining site in Wisconsin has led to another exposure, identifying private security contractors on the US/Mexico border.

The company is Bulletproof Securities and its clients include the Salt River Project, the operator of the dirty Arizona coal fired power plant located on Navajoland, the Navajo Generating Station. 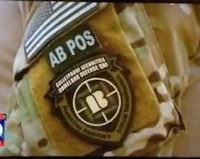 Bulletproof Securities boasts of its work on the US/Mexico border, on its website. It names several US agencies that it says it has a strong relationship with. Those are the same US agencies that were recently exposed for spying on Navajo and Tohono O’odham human rights activists who oppose the militarization of O'odham lands, and the exploitation by the dirty coal industry of Navajoland. http://bsnorrell.blogspot.com/2013/05/tohono-oodham-and-arizona-police-stalk.html
Today's exposure comes as Tohono O’odham and other Native people who are abused by US Border Patrol agents and private security contractors have been questioning who these new heavily-armed contractors are lurking around the border. The contractors have refused to identify themselves.

Back at the US/Mexico border, Bulletproof Securities' website  shows a photo of the contractor working with the US Border Patrol.

The exposure comes today, following a recent Freedom of Information request concerning the Occupy movement. Those US documents exposed the fact that Tohono O'odham and Navajo human rights activists were being spied on and stalked by federal agencies, Arizona police, Tucson police, and Tohono O'odham police.

Bulletproof Securities says it trains with submachine guns and builds machine guns. "We also have the ability to train and sell weapons to our clients."

The guards are trained snipers and sharpshooters and former US military, police officers and US Border Patrol agents.

Bulletproof Security says on its website: “BPS has at its disposal the latest cache of specialized equipment for border security operations, not typically found in the private sector. As example, BPS owns heavily armored Joint Light Tactical Vehicles (JLTV’s), Tactical All Terrain Vehicles (T-ATV’s), FLIR (mobile thermal systems), mast equipment (eye in the sky), and many other state-of-the-art assets.”

Top photo caption Wisconsin:  Photographs of armed guards dressed in military-style camouflage and combat gear have appeared on anti-mining blogs in recent days. In one photo, one of the guards, armed with an assault-style rifle, appears to be masked. The photographer, Rob Ganson, said this was taken at a Gogebic Taconite drill site on Saturday.

Video: In Wisconsin, video surveillance of the guards, with an Ojibwe offer of fry bread.
Posted by Censored News, publisher Brenda Norrell at July 08, 2013