The Tohono O'odham Legislative Council approved the use of the US military in the construction of the 15th spy tower on sovereign O'odham land, according to the May 7, 2013 resolution, despite O'odham protests over the militarization of their lands.

The Tohono O'odham Council also approved expansion of the US Border Patrol station in the San Miguel area, and waived its right to a fair market value assessment of the land. The Border Patrol station will be expanded from two to five acres. The expansion includes an operating station for spy towers, helicopter pad, fuel station, lighting and more, according to the tribe's resolution of June 10, 2013.

Three days earlier, on June 7, 2013, the Tohono O'odham Council approved the expansion of the US Border Patrol station at Papago Farms from two to five acres. The same waiver of a fair market assessment of the land was waived. The expansion includes communications for spy towers, fuel stations, helicopter pad and lighting.

The Tohono O'odham Council approved the use of three acres at Pisinemo/Kupk/Dirtburn site for US Border Patrol use, according to a second resolution on June 7. The site, which would include housing, helicopter pad, and more, was approved in secret last year. Many O'odham in the area said they were unaware of it. 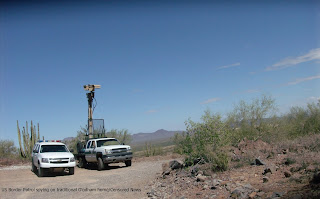 O'odham human rights activists say both the Tohono O'odham government and Homeland Security have ignored the abuse and stalking inflicted on them by US Border Patrol agents. The documentation includes unjustified beatings of O'odham and US agents harassing and abusing O'odham women. Further, as seen in the photo, US Border Patrol agents' spy cameras are pointed at traditional O'odham homes, and not the border.

While the abuse of O'odham continues, corporations are profiteering from the migrant hysteria propagated by the media. This hysteria is spun by Arizona politicians and their lobbyists who are funded by these corporations, including border wall builders, spy tower builders and private prison operators.

Mohawks from the northern border are among those who have come to the southern border to support O'odham who are protesting the abuse by the US Border Patrol, and violations of sovereignty being carried out by the tribal government in collusion with the US government.

The Tohono O'odham Council approved the US Border Patrol to expand in San Miguel and Papago Farms, from two to five acres:

Tohono O'odham Council approves use of US military to construct US spy towers on sovereign land, despite protest by O'odham human rights activists

There are many fragile cultural sites on the Rez, are these towers accompanied by the appropriate environmental impact statements?