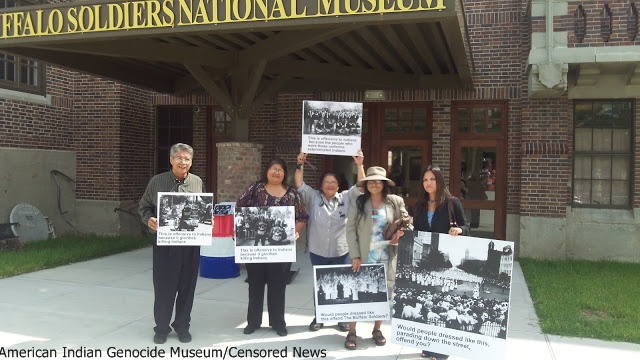 By Steve Melendez, Pyramid Lake Paiute
President, American Indian Genocide Museum
http://www.aigenom.com
Censored News
HOUSTON -- The American Indian Genocide Museum and the Southern Apache Museum met today with the Buffalo Soldiers National Museum’s founder, Capt. Paul Matthews.  This historic meeting was moderated by Mr. Peter N. Berkowitz and Mr. Ian Hancock of the Texas Holocaust and Genocide Commission.
The native people expressed their great displeasure with the Buffalo Soldier Museum representatives referring to our ancestors with the term “hostile” because that was a designation given to all Indians who “rejected reservation life."
Capt. Matthews was shown a picture of a Ku Klux Klan parade in the nation’s capital in 1939 which showed thousands of hooded Klansmen marching down Pennsylvania Ave.  He was asked if people dressed like that, marching down the street would bother him.  His reply was , “I don’t mind, it’s a free country."
When Capt. Matthews  stated that the Buffalo Soldiers chased robbers, thieves and Mexican bandits, he was asked on whose land they were on when they did that, he had no answer.  When Capt. Matthews told how the Buffalo Soldiers also strung telegraph lines, laid railroads, and guarded stage coaches, he was told that that was a lie.  “We didn’t string telegraph lines? How is that a lie?” He was told that it was a lie because it was a half-truth.  He was told that in order to be truthful, he should say, “The Buffalo Soldiers strung telegraph lines on Indian land. They laid railroad tracks on Indian land and that they guarded stage coaches on Indian land.”
The meeting was productive as far as the Buffalo Soldiers  Museum no longer using the term “hostile” or any other inflammatory words when referring to the Indians, especially in the classrooms.  Also, Capt. Matthews offered to allow the Indians to put up a display in the Buffalo Soldiers Museum  to teach  their side of history and for both sides to find common ground that would teach co- existence and tolerance.