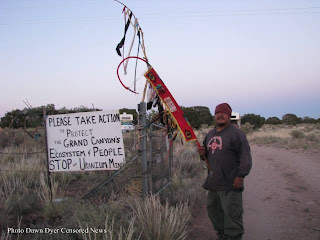 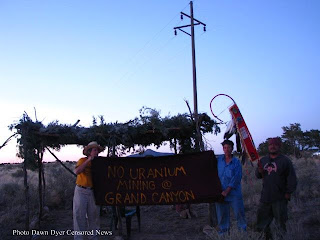 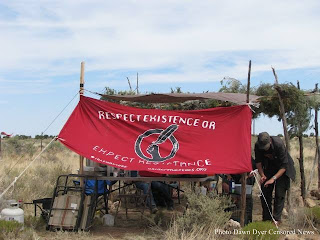 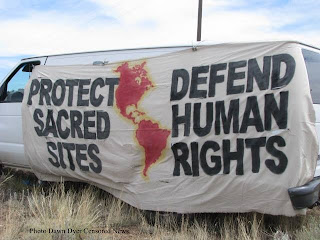 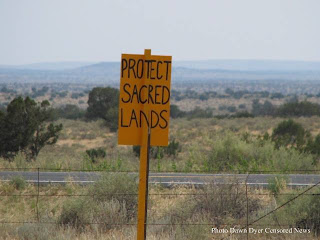 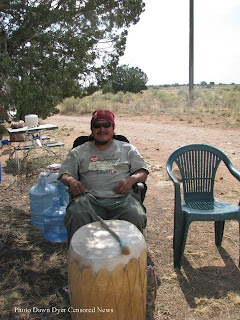 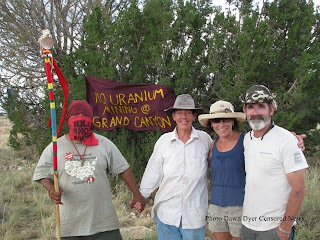 Thank you Dawn Dyer for sharing your photos with Censored News. Thank you Supai Waters, supporters and defenders of sacred lands against uranium mining at the camp on Havasupai land in the Grand Canyon.

RED BUTTE, Havasupai -- Energy Fuels Inc., the Toronto-based company digging the mine, have already dug 120 feet down what they hope will be a 1600 foot shaft. If the mine starts extracting uranium, it will expose residents and visitors to "low-level" radiation along Hwy 64. So called “low-level” radiation poisons air, waters, and soils for billions of years, causing cancers, birth defects, and other health problems. Even worse, Arizona's environmental and haulage regulations fail to protect the public from these dangers.

In addition to these health impacts and contamination of the Grand Canyon ecosystem and aquifer, the mine will directly harm the integrity of nearby Red Butte, sacred to the Havasupai and other indigenous people.

For the past thirty years indigenous people of northern Arizona and their allies have been resisting uranium mining at the Grand Canyon. This struggle continues as protesters gather to express their opposition to the Canyon Uranium Mine 15 miles south of the south rim.

The mine, owned by Canada-based Energy Fuels Inc., is located in the Kaibab National Forest –15 miles south of the Grand Canyon. Before approving the mine, both the company and the US Forest Service failed to consult with local tribes as required by law. Instead, the USFS rushed approval by using an outdated Environmental Impact Statement, silencing community input and recent scientific research.
--Mama Bears Brigade
Read more:  http://bsnorrell.blogspot.com/2013/06/defend-havasupai-sacred-land-from.html