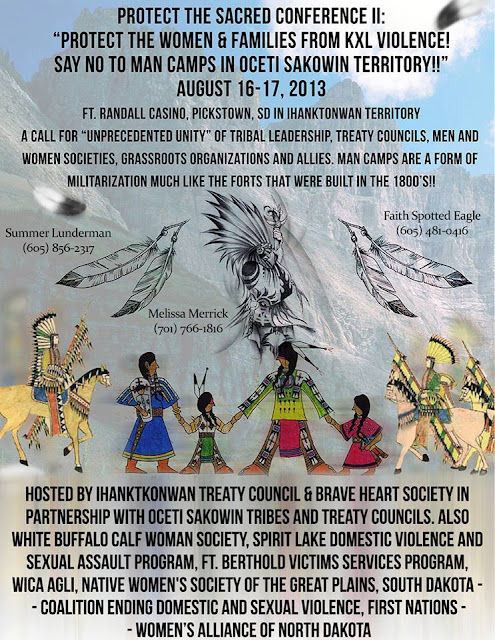 PICKSTOWN, SD – A conference is planned for August 16 & 17, 2013 at the Fort Randall Casino on the Yankton Sioux Reservation to promote awareness of the man camps that are part of the proposed TransCanada Corp oil pipeline that will run from Canada, North Dakota, eastern South Dakota, and Nebraska to go to refineries in Illinois and Oklahoma.  The Conference is the Protect the Sacred II Campaign to oppose the KXL development in treaty territories.  A previous successful gathering in January of 2013, resulted in a historic International Treaty to Protect the Sacred against KXL and Tar Sands Development.
Read more at Last Real Indians:
http://lastrealindians.com/press-release-conference-to-educate-on-proposed-pipelines-man-camps-in-oceti-sakowin-territory-august-16-and-17/
Posted by Censored News, publisher Brenda Norrell at July 30, 2013