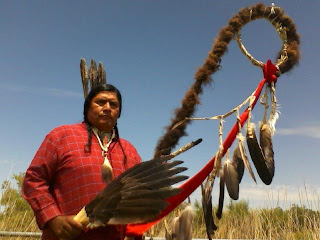 From Kwassuh, Wesley Dick: Nevada State Department of Wildlife plans to prosecute and challenge the Numu Nation/Treaty Indian/Federally Recognized Tribal Member. Kwassuh will stand for all Red Nations and end interference of all our hunting rights. Arraignment scheduled for July 15, 2013 at Austin Courthouse Nevada -- all Indians needed to attend.

Hello, we need your help now. The State of Nevada Department of Wildlife, which is a corporation, plans to prosecute me in the Austin Justice Court on July 15, 2013 at 1 pm. This county court is claiming to be the State of Nevada, which is also a corporation and the have absolutely no jurisdiction. I handed the Nevada State Game Warden Federal and International and National laws that are to protect me, my people and our lifeways. These laws I carry with me every day and I am learning more about these corporations that have no authority nor power over Indigenous People. Censored News has been good to us and now the Indian people will learn such as I and gain that good freedom as I plan to win and end any more interferences and uphold laws, treaties and use our federal recognition and trustee status by the united states of America. The State of Nevada Governor Sandavol has not responded to my letter as of last year and he is liable just as this county court and the judge and the prosecutor and the game warden will all be held accountable.

Who do they think they are telling Native People when & where we can HUNT & FISH. These are OUR RIGHTS FOREVER as long as we LIVE.

Hunting and fishing rights are some of the special rights that Native Americans enjoy as a result of the treaties signed between their tribes and the federal government. Historically, hunting and fishing were critically important to Native American tribes. Fish and wildlife were a primary source of food and trade goods, and tribes based their own seasonal movements on fish migrations. In addition, fish and wildlife played a central role in the spiritual and cultural framework of Native American life. As the Court noted, access to fish and wildlife was "not much less necessary to the existence of the Indians than the atmosphere they breathed" (United States v. Winans, 198 U.S. 371, S. Ct. 662, 49 L. Ed. 2d 1089 [1905]).

Hunting and fishing rights are some of the special rights that Native Americans enjoy as a result of the treaties signed between their tribes and the federal government. Historically, hunting and fishing were critically important to Native American tribes. Fish and wildlife were a primary source of food and trade goods, and tribes based their own seasonal movements on fish migrations. In addition, fish and wildlife played a central role in the spiritual and cultural framework of Native American life. As the Court noted, access to fish and wildlife was "not much less necessary to the existence of the Indians than the atmosphere they breathed" (United States v. Winans, 198 U.S. 371, S. Ct. 662, 49 L. Ed. 2d 1089 [1905]).