New Little School Dates, Information about the Videoconferences and a few other things 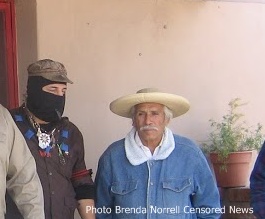 New Little School Dates, Information about the Videoconferences and a few other things.
July 2013
http://enlacezapatista.ezln.org.mx/2013/07/19/new-little-school-dates-information-about-the-videoconferences-and-a-few-other-things/
For: The compañeras and compañeros of the Sixth and the Zapatista Little School students.
From: Subcomandante Insurgente Moisés.
Compañeras and compañeros.
Here I am sending you some information about the Zapatista Little School.
First: We want to communicate with those compañer@s—men, women, children, and elders—who did not get a spot in this first round of the Zapatista Little School.
The Zapatista peoples did what they could to make more spots available, and opened space for 1700 students; these spots once again filled up quickly. In other words, they created 200 more spots, and those next in line on the waiting list have already been informed they can come. Nevertheless there are many more people who want to come. We are writing to tell them not to be sad anymore, or mad, or pissed off because there wasn’t any more space.
The compañeras and compañeros who are the Little School teachers have decided that there will be another class at the end of the year, in December of 2013, and also one in January of 2014. More specifically:
The dates for the second round of the Little School will be:
Registration: December 23-24, 2013.
Classes: December 25-29, 2013.
Return: December 30, 2013.
They also decided to remember and celebrate the January 1, 1994 Zapatista uprising, so for those who want to stay for the 20th anniversary festivities, there will be a party December 31 and January 1.
After that, there still won’t be rest, because it has also been decided that after the festivities, the work—that is, the Little School—will continue:
Dates for the third round of the Little School:
Anniversary party: December 31, 2013 – January 1, 2014.
Registration: January 1-2, 2014.
Classes: January 3-7, 2014.
Return: January 8, 2014, everyone back to their corner of the earth.
PAY CAREFUL ATTENTION TO THIS POINT: In order to request an invitation and registration code for the second and third rounds of the Little School, even if you have already asked for one via the webpage or by email, you must send your request to the following email (you can send it as of today):

escuelitazapDicEne13_14@ezln.org.mx
We are doing it this way so that we can organize things adequately and so that you receive a timely response.
Second: Remember that the parties for the 10-year anniversary of the caracoles and the Good Government Councils are open to all. These parties will begin August 8 and continue the 9th and 10th. On the 9th and 10th there will be a concert and presentations by artistic groups from various parts of Mexico and the world. There will also be a concert in CIDECI on August 11 on registration day. We will send out the program soon.
Third: We want to remind those who are coming to the first round of the Little School in August of this year that:
-Registration, to which you should bring your ID and registration code, will be August 10 and 11, 2013 in CIDECI, San Cristóbal de Las Casas, Chiapas, Mexico.
-You should bring $100.00 (one hundred Mexican pesos), which covers the cost of the study packet. It consists of 4 textbooks and 2 DVDs (20 pesos per book and 10 pesos per DVD).
-When you register, you will receive your nametag and student study packet, and you will be told which caracol you are going to. If you have a vehicle you will given directions to your caracol and informed when a caravan with a guide vehicle will be leaving. If you don’t have a vehicle, you will be told which bus or truck you can ride in as part of the caravan. If you are taking your own vehicle, you can leave it in the caracol during your class and we will take care of it.
-The departure to the caracoles is the 11th. If it gets late on the 11th and the buses are still filling up, there will be an early departure on the 12th.
-Classes start August 12 and finish the 16th; August 17 will be the return trip, and the buses will leave you in CIDECI, San Cristóbal de Las Casas, Chiapas. There you can stay for the Seminar “Tata Juan Chávez Alonso” given by various originary peoples from our country.
-Travel times:
The farthest caracoles are La Realidad and Roberto Barrios. Traveling in caravan and without stopping, getting lost, or breaking down, the trip will take 8-9 hours.
The next farthest is La Garrucha. Traveling in caravan and without stopping, the trip will take 5-6 hours.
Then follows: The caracol of Morelia, traveling in caravan and without stopping, the trip will take 4-5 hours.
And lastly: The caracol of Oventik, traveling in caravan the trip will take one and a half to two hours.
All caravans will leave from CIDECI, San Cristóbal de Las Casas, Chiapas, Mexico.
Another day I will send you the hourly schedules for the classes, but before that SupMarcos has to tell you how all of this is going to work.
Fourth: We also want to tell our compañer@s of the Sixth that if they can’t be at the Little School this August, there is still a way to participate, because we are going to transmit special classes by videoconference, with a special team of Zapatista compas who are going to explain everything and respond to your questions via “chat.”
In this process we will have the support of the compas from Koman Ilel and other independent media.
We will tell you more about this in a specific letter. But I will let you know now that the videoconference days will be August 12, 13, 14, 15, and 16. There will be at least two different schedules, one so that people in the Americas can participate in the evening, and another some hours later so that people from other continents can also participate in the evening. We did it this way thinking that in the evening you will arrive home from work and can take the class, or you can take it during the day if you work at night.
In order to take the class via videoconference, you will need to have a code or password. This password is only given to those who are invited and have asked to take the class via videoconference. If you want to take the class by videoconference and you don’t have an invitation, please ask for one at the following email address:

video@ezln.org.mx
You will then be sent the password to enter the internet conference. Also, for any compas who are organizing videoconference sessions where they are, they should send us the names of those who they will be inviting. This is so that we have an idea of who is taking the course via videoconference.
That is what we wanted to tell you, compañer@s of the Sixth.