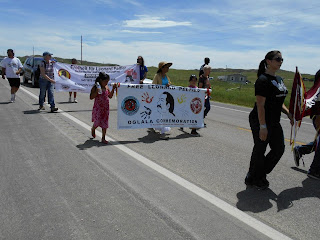 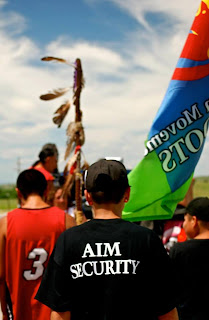 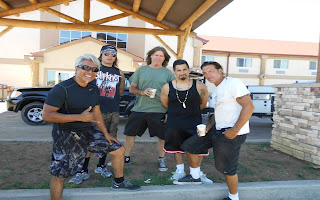 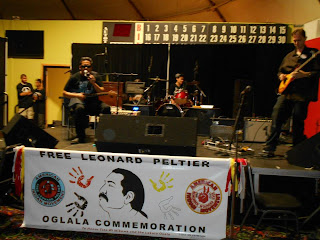 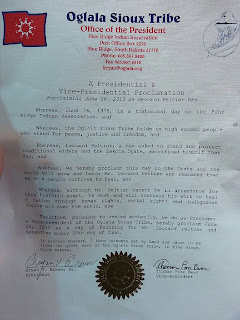 To kick off this year’s event, the Committee enthusiastically welcomed the arrival of Shadow Nation. Arriving the evening of June 24th, after travelling up from New Mexico and Texas, Shadow Nation’s crew, despite being road weary hung out and exchanged ideas with some of the Committee members.

The 25th promised to be a busy day of running around making preparations for the following day’s events; the day wrapped up with the Committee planning meeting and a fried chicken dinner. The Committee met with the community and introduced the Shadow Nation band members and film crew. Shadow Nation members introduced themselves to the community and discussed their plans to film issues relevant to the people of Pine Ridge. The meeting and meal concluded with a clear agenda and hopes of a safe and successful event.

We had a good turnout at the Little Family Cemetery, well in excess of 100+ attendees. Prayers and words were shared by Billy Good Voice Elk & Guy Dull Knife. The drum presented honor songs for the occasion. We visited with old friends and became acquainted with those who we hope will be new ones. Many of the concert performers participated in the walk, the Shadow Nation group carried their banner, and arriving in the early morning hours from a South Texas road trip, with very little rest, the Black Owl Society: Pte, Ryan, Kelly and Alicia rolled in to join us for the march and shared much needed water with the walkers.

In celebration of the first ever Leonard Peltier Day, many came out to celebrate, pay their respects and honor the historical day. The temp not as bad as last year’s when the horses left shoe impressions in the asphalt was nevertheless warm and sunny. Elk Nation led the march with honor songs, followed by the staff bearers and the walkers. The line was roughly a mile in length to include the drum, walkers, and the cars carrying many of the small children and elderly.

Ivis Long Visitor welcomed everyone and read Leonard’s statement. Leonard’s words were shared with everyone in attendance. A brief history of the events of June 26th, 38 years prior was related as well as the lasting impact of that day which so affects many still. Keeping things moving, Billy Good Voice Elk, served as the emcee.

Our thanks go to the Stanley Star Comes Out family and Pizza Hut for providing a delicious meal at the Jumping Bull property. Following the meal was the presentation of the memorial cakes. The highlight of the cakes was a reproduction of Tom Cheyenne’s portrait of Leonard that graced the largest cake as well as this year’s badge. The culmination of the event at the Jumping Bull property was the children’s giveaway. The children received book bags stocked with school supplies as well as toys. Adding to the giveaway, small household items were as well given. Our sincere apologies for failing to recognize the individual or family responsible for these gifts; in the flurry of activity we failed to notice who brought these gifts. Please accept both our apologies and our thanks.

Obstacles and challenges never seem to cease in putting this event together. The Committee works through these as best we can given the circumstances and has to remain flexible to meet the challenges and thanks the musicians for their understanding. The concert began late, kicking off this year’s Youth Concert: the Old Geezers Band rocked us with some classic tunes, Scatter Their Own got us up out of our seats, and Spyderzback honored Leonard by incorporating his word into their songs, finished off by a rousing honor song for Leonard, sung by Robert Waters. We ran out of time and there was a mix-up in the ending lineup, and we wholeheartedly apologize for this, it was not our intention to slight anyone.

Shadow Nation played and rocked the house with a spirited and lively performance. Followed by the Black Owl Society featuring Pte with special guest Wanbdi back on drums was our concluding act. Their rocking blues was soulful, on spot, and provided a thought provoking message that natives too can rock. As an aside, it was nice to see the Zephier family once again.

On the 27th, Marjorie Black Elk and Kevin Two Bulls opened their homes for Shadow Nation to do a video shoot, with the buttes serving as a back drop. Many thanks to the two families and all who participated in helping Shadow Nation shoot a video that we can’t wait to see. It was pretty cool to watch the creative process and all the hard work that goes into a film production.

Shadow Nation prior to their departure, on June 28th, donated a supply of ESP electric guitars & bass, acoustic guitars and a drum kit to the Pine Ridge High School music department. George Lynch personally met with two promising area youths, BJ and Mark. George presented each with a guitar and provided them words of encouragement.

All in all it was a great week, we would like to thank everyone, all those who worked on the Proclamation: President Brewer, VP Tom Poor Bear, Eileen Janis, and most especially Keith Rabin.

Thanks also too: AIM Grassroots, LP-DOC, Prairie Wind Casino & Hotel, Our Lady of the Sioux, and Rez West Productions.
And too all those behind the scene.

We ran out of time and our apologies go out to:
Robert and Monty Briggs
Brett Hamilton.

As always our musicians come out to support this youth event in the hopes of getting Leonard’s message out.

Last but not least, we wish to thank Leonard Peltier for the sacrifice of his freedom, his faith and belief in the youth and his continued support of our efforts on his behalf.