The Longest Walk of 1978, for me, was a great learning experience from the very first time I met the coordinators of the LW78 while I was hitch-hiking to find the Walk. That same freezing-evening of early March I arrived at the LW78 camp and as the Walkers came into the camp after dark. The next morning was the great circle of prayer and I joined the walk near the state lines of Nevada and Utah. I really had never left Arizona, staying close to the Dineh (Navajo) Rez, and mostly helping my parents with herding sheep and farming.

My first week on the LW78 was like entering a world of the past but it was still in the present: young natives with braided hair / feathers / deerskin pouches / staff with eagle claw and feathers / ribbon shirts / drumming and singing. I came from a world of high desert country / hearing my family speak Dineh Bi'Zaad' (Navajo language) / wild juniper forests / isolated deep canyons / free open range / living off the lands. 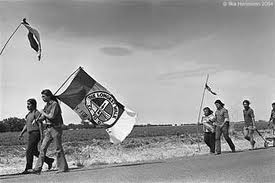 Then I began to meet these brothers and sisters of many nations but most of the Indian walkers were from the cities. Despite that, they showed their pride and dignity everyday out on the highways, they walked with their chins held high, and carriers of the staff and the Canupa led the nations toward the east. This pride and dignity was not a display of 'coolness' but it was seriousness because it was a prayer walk!
Walking behind the Canupa, the sacred staffs and the Nippozan Mihoji Buddhist chanting met that every walker was praying for their lands and relations back Home. 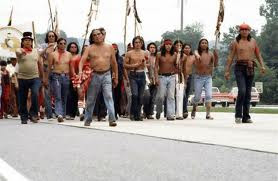 "Every step was a Prayer!" It was a great story unfolding in my life and I prayed and dream that this story shall always live on, upon my lands, within the hearts of my peoples, in my heart so that I may share it with my children and grandchildren.

Today, the memories are endless and if I were to re-tell about this experience, it would take days perhaps to tell. One very unique aspect that became so important to me and to many others also, was that several different indigenous spiritual leaders called the Longest Walk 1978, The University of the Red Nations. (We Indians were the Red Peoples.) The University not only in the terminology but within the LW78's complete essence and context this was communities united with many teachers that came for many nations. There were the ceremonials, the interactions with non-Native communities with many different backgrounds and beliefs, the students were the walkers who listened / were tested / group worked, and experienced the challenges the natural elements but that was teachings and in the end after returning, we Walkers had a degree to carry on a profession of spreading these indigenous messages and work to rebuild our sovereign existence.

Decades from that time, our indigenous and human existence and journeys are still facing the cruelty of injustices, racism and desecration of our homelands. Things seemed more hopeless now but we still have our sacred prayer staffs, the sacred Canupa, the tobacco, the drum, and each other even though majority of us Indian peoples try to escape to the illusions of America. 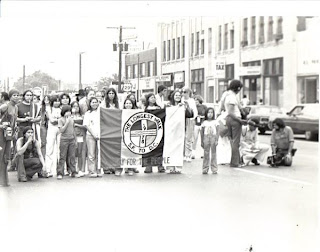 This Return Walk is important because no justice courts on our Rez or in the cities we live in are going to grant us harmony and balance. Thousands of us woke up in the 1970s after we realized what Vietnam was all about and after Wounded Knee73, but our oppressors have put most of us back to sleep. This action of the Return Walk is crucial because as this Spiritual Walk moves all across the sacred Turtle Island, the University of the Red Nations needs to be revived, the sacred drum must beat in order to reunited, the prayers must be loud along the highways so the we can re-awaken, and because this is our last chance.
Mitakuye Oyasin.
Kat (Bahe) - Big Mountain Dineh Nation

Special thank to Bahe and the photographers, including Daniel Luna who shared his copyrighted photos with Censored News.
Posted by Censored News, publisher Brenda Norrell at July 03, 2013