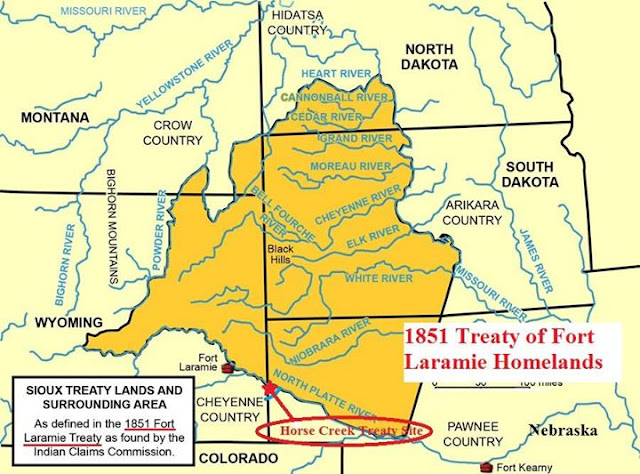 FOR IMMEDIATE RElEASE
There will be a Treaty Meeting at the Wounded Knee Massacre site on Saturday afternoon at 4:44 p.m.

Families, women, and men are invited to participate in this spiritual Treaty Talking Circle to discuss strategies for getting the 1851 Treaty of Fort Laramie honored and respected.

Currently, nine (9) trillion dollars in Black Hills gold sits as stolen property in Fort Knox, Kentucky, while millions of dollars a day is spirited off of Treaty Lands from Wyoming in train cars to supply the electricity needs (coal gasification plants) for millions of americans - without one (1) cent going to the Treaty Signatory Nations and the N/DN/D/Lakota people for their Treaty Resource.

There will be a Canunpa Circle Ceremony as well as discussion about utilizing Treaty Land for a spiritual encampment/Treaty Reclamation project - the 40 acres of Treaty Land occupied/swindled from the heart of the "Pine Ridge Reservation" next to the Wounded Knee Massacre Site currently under discussion.

Treaties are protected by Article VI of the U.S. Constitution that states, "Treaties made with Indian Nations shall be the supreme law of the land, with the judges in every state bound thereby."

There are no 'broken' treaties, only those VIOLATED each day by the u.s. government and american people. The "squeeky wheel gets the grease" so it is now time to make Treaty Voices heard as Treaty Peoples reclaim Treaty "supreme law" Homelands.
(In 1992/3, Oliver Red Cloud helped with the re-establishment of Oyate Omniciye "General Council Talking Circles" in Porcupine, SD, that later moved into Mni Luzahan)

Ho! I am with you in spirit.