My sources have raised a concern that needs to be considered. Although, I have not used these two sources too much and I do not know if this information is true, it rings like the truth. I am being told that the "big money" in the States are hoping that an oil blockade in Canada takes place. The big money oil guys in the States will ensure that the price per barrel of oil skyrockets due to the Canadian pipeline blockades and they will make a lot of money. Harper will get a lot of the controlled news media support in the States and Canada to label our people terrorists when the oil blockades happen. Americans will be told that they are paying high prices for gasoline because of the "terrorists" in Canada.

What I do know is real is that Enbridge and TransCanada are pumping at the highest capacity right now. They are storing as much oil in Cushing Oklahoma and elsewhere as possible. There is at least six months of capacity. An oil blockade must last more than six months if a pipeline blockade is to be effective. So, the two sources I am in touch with maybe right. I still am not sure about their "truth" but it is enough to take into consideration for the strategy for the blockades. The oil pipeline blockades will have dramatic effects within three days of the action. The Enbridge pumping station at Gretna Manitoba pumps a million barrels a day into the States. It is in our territory.

You have made the statement in Ottawa that we must shut down the economy of Canada. I have made similar statements for many years. Grand Chief Nepinak of the Assembly of Manitoba Chiefs also made the same statements. The 2007 National Day of Action was a warning that has been ignored by Harper. Now we are stuck with the need to move ahead with action to back the statements that have been made. On Wednesday January 16th at noon, we will blockade two major railway systems in Manitoba. This is not "Idle no More", this is not a round dance. The 50 or so Chiefs on the  teleconference in late December have said that January 16th will be the time we implement action nationally. We will do our part. What the people in other provinces do is up to them.

We are on solid legal ground to carry out blockades of the economy. The legislation that Harper has passed is fundamentally breaching the treaties. The Treaties granted the immigrants rights that we must now revoke as a result of Harper's legislation.

The position from our blockade will be as follows:

1.        $10 per barrel of oil collected by the Americans to be used as payment to the indigenous peoples of Canada.
2.        An end to federal funding of First Nations in Canada.
3.        Canada is our land, our resources, we give the immigrants a share of our resources, not the other way around.
4.        We will build our own Casinos on our own authority, no more provincial oversight.
My public statement to the Canadian Taxpayer Federation will be blunt and to the point, "take your taxpayer money and shove it up your arse".
As the owners of the land, we own all the resources of these lands. We finance the immigrants, not the other way around. We will give them a share of our natural resources, we are not asking them for a share of our own property, let them understand who lives on whose good graces. In Ottawa, some of the Chiefs begged for a meeting with Harper. When the railway blockades go up permanently, Harper will be asking for a meeting. When CN and CPR aren't able to transport stolen property to the Americans, Canadians will begin to understand that this was the most peaceful country in the world because we put up with the bullshit for far too long. They forgot who the immigrants are and who are the owners.
Matthew Coon Come has a lot of influence over the Americans. The northern Cree of Quebec power up the eastern United States. The Cree signed a $3.5 billion deal with Quebec to send electricity south. The Cree want to ensure that there is no disruptions of that delivery of electricity to the Americans. When bloodshed occurs in the west as a result of the railway blockades, the Cree cannot guarantee that the indigenous people in the south of Quebec and Ontario will honor the Cree agreement. Coon Come should be in New York and Washington asking Americans to call Harper.
I would ask that the oil pipeline blockades not occur for three months. We need to try other blockades until we see the results. If we need to block oil pipelines, we want support from OPEC. Ask OPEC for two days of oil stoppage to show worldwide solidarity for indigenous rights to property in Canada. OPEC needs to hear from us. OPEC will make billions if the price of oil skyrockets.
We have support from Arabic people. The big news media in the United States and Canada will label us terrorists but they have a big problem, the public comments of Canadians, comments of hatred of indigenous peoples that need to be heard in other countries.
There is the six hundred murdered and missing indigenous women in Canada, thirty thousand indigenous children in care, police brutality, housing conditions, the deliberate economic sanctions that cause 60 to 95% unemployment in many First Nations communities etc. We need to ensure that the internet is alive and that the world hears about the plight of our people. When the economy of Canada starts to collapse, the world will hear us. Look at what some of the Palestinians are saying:

http://indiancountrytodaymedianetwork.com/article/palestinians-endorse-idle-no-more-146631#.UPN2ix-AMhk.email
The following part of the article made me smile;
An empathy with Native peoples goes back to Barakat’s childhood. As a young boy growing up in Palestine he saw that the Israeli media always portrayed Native peoples as savage, barbaric terrorists – the same terms used to portray Palestinians in the media, he said. “So even when we were children we would fight over who would play the cowboys and who would play the Natives, because everybody always wanted to play the Natives,” he said.

Barakat said it was no coincidence that he chose to begin the call for the Palestinians in Solidarity with Idle No More... “It’s almost an instinctive feeling to see ourselves in the indigenous struggle,” Barakat said. “It’s because of this that Palestinians in general see that what happened and is still happening to Natives in Canada and the U.S. is actually happening now in Palestine.”
Chief, the support around the world is growing. When the railway blockades go up, there will be a severe backlash. The people who are on the blockades need to be clear, this is not a round dance, this will have consequences but if we keep in mind that our children will not have land or rights in our country in the future, the sacrifices we make today will be worth it. We are pledged to peaceful but effective protest. We know the whiteman, we know that violence is in his nature. We must be prepared, but we do not need to be victims forever.
When we are arrested, others will take up our blockade. When AIM took over in Wounded Knee in South Dakota in 1973, they did so as peacefully as possible but many people died, sixty-five and more. Two white FBI died and that is all that is remembered. We do not want bloodshed but we know the whiteman, in Gustafson, in Ipperwash, in Oka, in Caledonia, in Tsuu Tina, we know the price our people had to pay for standing up. Chief Morris and his council know the price that must be paid but we know that on January 16th, we will stand.
at January 14, 2013 No comments:

'We the People Rally' Hawaii 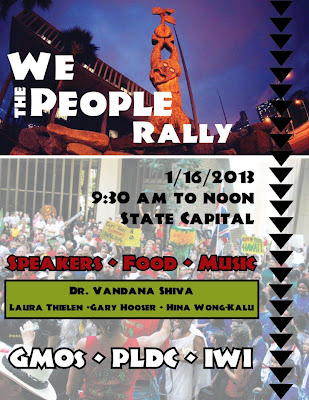 We would like to offer some action to start off 2013. We would like to bring people together to speak to our government.
There will be many concerns, but one loud voice, the VOICE OF THE PEOPLE!

This is a grass roots effort to redirect our government away from the corporate interest and to hear our voices. We want our HEALTH and the HEALTH of our islands PROTECTED for our future generations: LABEL GMOs
We want a government that listens to the people, has a fair, open and transparent process: REPEAL THE PLDC
We want Hawaiian Rights honored and recognized: PROTECT THE IWI KUPUNA, RETURN THE WATERS, DE-OCCUPY.
This is a time to LOKAHI, those who love these islands, those who have a kuleana to the future, those who believe government is OF, BY and FOR the people.
Lets make 2013 a year of action: JAN. 16 2013 OPENING DAY OF OUR LEGISLATURE (1.) 8:30am "HELEKU MARCH" from UH campus (Dole and University Ave.) to State Capitol. (2.) 9:30am "WE THE PEOPLE RALLY" at the State Capitol.
IT WILL BE A GREAT DAY TO COME TOGETHER: GREAT SPEAKERS---MUSIC---FOOD---TAKE BACK YOUR HOUSE... "STATE CAPITOL"
YOU NEED TO DO YOUR PART...SPREAD THE WORD, CONTACT YOUR GROUPS, FRIENDS AND FAMILY.
at January 14, 2013 No comments:

US ‘TERMINATOR’ ACT IN CANADA
MNN.  Canadian Prime Minister Harper has adopted the US “Termination Act” of 1953.  [Public Law 280]  C-45 copies the US version of Hitler’s “Enabling Act” 1933.  Indigenous were deemed a burden. Congress ended federal recognition, sovereignty and all obligations to 109 Indigenous nations.  Previous treaties and agreements were revoked.  2.5 million acres of land was no longer protected. The Federal government took over tribal land rich in resources, turning much of it into national parks and refuge systems.

Co-operative “White” chiefs [tribal councils] helped the termination process to ”encourage assimilation into a modern individualist society rather than a savage tribal mentality”.
Indigenous lands were converted to private ownership without their consent.  They could be sold by individuals to non-natives.  Indigenous jurisdiction was ended.
They had to pay taxes and were governed by state laws.  States did not provide services for lack of funds. Health, education, economic development, policing, housing and fire fighting obligations were ended as they were no longer Indians.
Money was withheld until they agreed to termination.  Afterwards the land and money was transferred to a corporation. Natives became shareholders, receiving 100 shares of stock. Much went to lawyers.
Children could receive shares only through inheritance, which could be inherited by non-natives.  Shares could be sold.  Non-natives controlled the corporations. Corporations owned the surface and regional corporations owned the resources.
Taxes put native enterprises out of business, falling below the poverty line. 40% were unemployed. If they were given something from the forced sale, they were not eligible for welfare. More land was sold to buy food.  Valuable resources made them not eligible for benefits.
Termination was devastating, forcing them onto welfare; 75% school drop out, states closed down schools in communities. Termination caused alcoholism, suicide, low education, family break ups, poor housing, high drop out, high imprisonment, and decreased life expectancy.
Indigenous were excluded from the Bureau of Indian Affairs’ higher Indian education funds as they were no longer “Indians’.   Hospitals and clinics were closed as they did not meet state standards.  Infant mortality rose by 300%.  No dental or eye care were available.

Mel Thom, Paiute said:  “The opposition to Indians is a monstrosity which cannot be beaten by any single action, unless we as Indian people could literally rise up, in unison, and take what is ours by force.  We are fighting for the lives of future Indian generations.
[Case precedent http://www.law.cornell.edu/supremecourt/text/391/404
]