When:  Monday January 28th 2013
Time: 11:00 AM -  1:00 PM
Where: 5847  San Felipe Street, Houston, Texas 77057
We will meet on the sidewalk in front of the Chase Bank building.
Parking garage is on side street near the back.   Cost 2.00 dollars an hour.
https://www.facebook.com/events/321195974664223/   Join group.
Why:
This is not just a Canadian First Nations issue.  It is not just a Canadian issue.  This is about Human Rights and Protecting the environment for all people.
Canadian Omnibus Bill C-45 was passed by the Canadian Government.
Indian Act
The amendments to the Indian Act are clearly designed to give the Ministry of Aboriginal Affairs access over First Nations' lands and undue influence on vulnerable communities. The key amendment to the Act gives the government authority to determine the surrender of any portion of any First Nation territory at any given time.
This clause is in direct contravention of the UN Declaration on the Rights of Indigenous Peoples which calls for the "free, prior and informed consent" of all Indigenous peoples exercising their right of self-determination.
Fisheries Act
New changes to the Fisheries Act build on changes in the spring omnibus legislation which further undermines Canada's ecology and removes legal barriers to oil, pipeline and other developers. Four former fisheries ministers as well as countless scientists have publicly opposed these amendments.  Currently resource developers have to receive authorization under the Act when their projects damage lakes, rivers or other fish habitat. They must also specify the corrective action. Under these new changes, the developer will no longer be responsible for fixing the environmental and habitat damage they cause.
The Navigable Waters Protection Act
The Navigable Waters Protection Act will be amended to reduce its scope to less than one percent of Canadian waters. The new law will restrict federal oversight to the three oceans that border Canada and to a mere 97 lakes and 62 rivers.
The traditional territories of Aboriginal peoples' will be at the greatest risk of environmental exploitation as the law was designed to provide quick development access to resource extraction industries, a great number of which operate on First Nations' land.
http://www.psac-afpc.com/news/2012/issues/20121030-e.shtml    -  -  - More information on Bill C-45 can be found at this link.

MNN:  INTO THE WELL:  INDIAN TRUST FUND HEIST
MNN:  Jan. 24, 2013.  Mark Carney, the former Governor of the Bank of Canada, shielded Canada from the effects of the recent financial crisis.  He used our Indian Trust Funds to bolster the Bank of Canada. This is the secret Indigenous Trust Fund that the Canada banking system and economy is built upon. In 2012 he was appointed Governor of the Bank of England, to begin on July 2013.

Queenie: “$3 trillion for a BJ!!j [bank job]. Come on over, Mark. Let’s have tea.”
Carney went to Harvard and worked at Goldman Sachs. In 1998 he advised Russians and at the same time bet against their ability to pay back their debt.
In 2004 Carney worked under the current Canada Finance Minister, Jim “Austerity Measure” Flaherty. He provided additional liquidity to the Canadian finance system using our Indian Trust Funds.  The Corporation of Canada is thriving in comparison to the other G8 countries.
In 2009 Canada was capitalized with our money to take advantage of the US and European financial crisis. In 2010 Carney was chairman of the Bank for International Settlements, member of the Group of 30, World Economic Forum and Bilderberg Group [Rothschild entities].

Carney is now going to the UK with our $3 trillion. The Bank of England can’t steal this money without him. They need the banker who knows these secret bank deals.  Carney and the bankers are playing with the world’s economy. They invest worldwide using our money to extract Indigenous resources from our brothers and sisters in other parts of the world.
Britain is leaving the European Union in 2017 so that our money [natural resources] will finance their economy. The bankers need to turn the settlers here against us so they can be a party to the fraud without their knowledge. Their media constantly vilifies us.
By design their corporate band councils mismanage our money, stash it away and keep us in dire living conditions. Indian Affairs sends in the bankers. Multinational corporations then have free reign over our natural resources, for example, Attawapiskat. If there are no longer any Indigenous, then they don’t have to pay into the Indian Trust Fund from the exploration of our resources. 100% will go to the bankers through Mark Carney.
In the Iroquois consensus decision making process those issues that affect everyone goes into the Well for discussion and direction.  Everyone has a duty to add their thoughts to the solutions [Onigonra].  The Council is divided into three parties [Clans]. The Well Keeper of the Turtle Clan brings the issue out of the Well, explaining the question. He passes it over the Council Fire to the Wolf Clan, who deliberate. They pass their decision back to the Turtle Clan. They deliberate. If the decision is the same, the Bear Clan confirms the decision. In case of disagreement, deliberations start over, revealing new information.  If disagreement continues, the Bear Clan cast their ‘vote’, for a two-thirds vote. The minority then agrees with it, making it a unanimous decision.  The War Chief and his Men make sure proper protocol is followed.
Issue for deliberation:  Should we stop the bankers from committing the biggest heist in banking history, the theft of $3 trillion from the proceeds of the Indigenous natural resources and from all future extraction. Send your comments.
As Patsy Cline sang: “Oh, we ain’t got a barrel of money.  maybe we’re ragged and funny.  We’ll travel along, singing a song, side by side.” http://www.youtube.com/watch?v=hiKhx0r9YR4 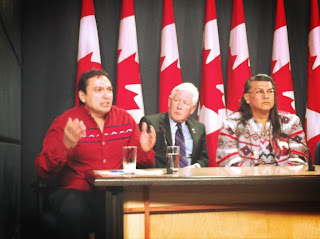 OTTAWA - Attawapiskat Chief Theresa Spence remains in hospital on an intravenous line as she recovers following six weeks without solid food.
Her spokesman Danny Metatawabin says Spence went to the hospital Wednesday evening for a checkup after agreeing to end her 44-day hunger protest.
She had been scheduled to attend a news conference this morning in Ottawa, but now Metatawabin says she won't be released until later today or on Friday.
Meanwhile, events marking the end of her protest are going ahead without her.
Chiefs and politicians are preparing for a gathering at midday at a downtown hotel.
Spence ended her protest after other chiefs and federal opposition parties promised to take up her cause of treaty implementation and improving conditions on reserves.
Read it on Global News: Global Edmonton | Chief Spence in hospital after ending hunger protest
Coverage by Clayton Thomas Muller, Cree
From the press conference to announce the conclusion of Chief Spence's fast
Photo 2: Elder Raymond Robinson speaks with MKO Grand Cheif Nepinak and Chief of Cross Lake Chief standing behind him.
Robinson, speaking out against Canada's new genocidal laws said, "These bills will kill us all if they are forced ahead, so fight with us!"
Robinson said, "These bills c37 c48 are taking control over our lands and water." Robinson spoke on the duty and responsibilities.
Danny Metawabin said First Nations can educate Canadians that First Nations are spiritual people and provide the facts about the treaties.
Top Photo in center: Bob Rae said, "Let's not forget that Harper's former party opposed all things, Native, treaties, UN Declaration on the Rights of Indigenous Peoples. He just doesn't get it."
Updating ... 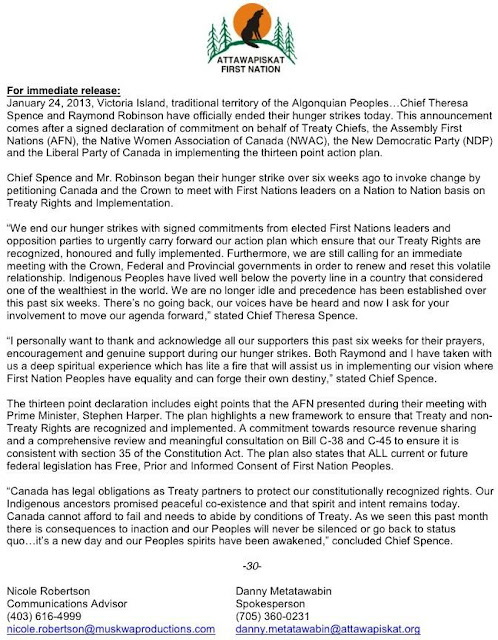