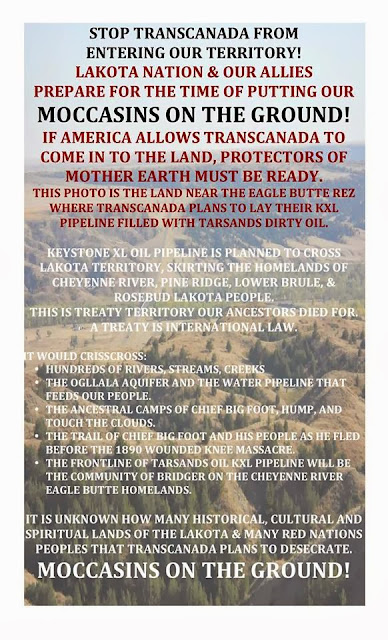 Lakota ride for the protection of Unci Maka (Grandmother Earth) against the KXL pipeline, the tarsands oil mines, uranium miners, heavy hauls. Oct 13-15, 2013 from Wanbli Heavy Haul Bockade site to Takini at Cheyenne River Homelands where the KXL plans to cross the Cheyenne River.
Monday, Oct. 14, 2013: Riding from Kadoka to Phillip today!
Debra White Plume, Lakota, Pine Ridge, South Dakota, said, "Why do we do this horseback ride while it is raining and snow is in the forecast? To stop the KXL Pipeline, heavy hauls, to leave uranium in the ground, for Unci Maka and sacred water! Let's do this for Unci Maka and our generations! Let's be strong TOGETHER! Much love n respect for EARTHS ARMY." 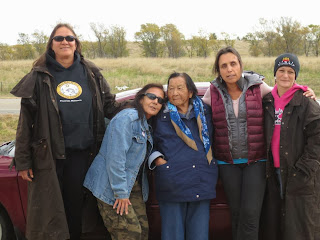 Lakota and Ojibwe horse riders are on a 150 mile horse ride from the Pine Ridge reservation to the Cheyenne River reservation in South Dakota, near the proposed Keystone XL pipeline route. Riders, led by Percy White Plume, (a descendant of the survivors during the 1890 Wounded Knee massacre), are riding to oppose the “man labor camps” which will accompany the proposed pipeline, and “to protect our water… We can drink bottled water, but our relatives in the horse nation, the buffalo nation and the animals cannot drink bottled water, our water is sacred…,” he said.

The proposed KXL pipeline crosses Lakota territory, and there are no pipelines in this region, home of the Oglala Aquifer, the primary source of water for most of the region. The ride began the same day as the 800,000 gallon plus pipeline spill from a Tesoro six inch line near Tioga, ND was revealed to press, and amidst a federal shutdown, in which it is not clear that PHMSA, (pipeline safety inspectors) are available. The ride also follows a freak, climate change attributed, two foot blizzard which killed over l00,000 cattle in the largely rural, ranching state. Amidst the changing weather, and riding through fields still littered with the carcasses of dead cattle, overturned trees and flooded creeks, twenty-five riders and supporters continue north.

The ride has been organized by the Horse Spirit Society of Wounded Knee, sponsored by Honor the Earth, and supported by the Swift Family Foundation, US Climate Action Network and 350.org. 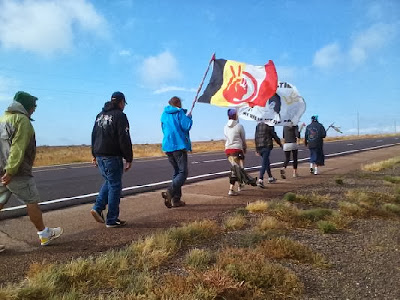 Tags: arizona, civil disobedience, detention center, Eloy
Just now, protestors chained themselves in front of the Eloy Detention Center. Their action calls on the President to stop deportations and the criminalization of immigrants. Through civil disobedience they say they’re exposing the inhumane imprisonment at the center of current immigration policy and the needless warehousing of the undocumented who could benefit from reform.
More: http://www.notonemoredeportation.com/2013/10/14/eloy/
at October 14, 2013 No comments: