On 24 and 25 June 2012 the bodies of human rights defenders Mr Almir Nogueira de Amorim and Mr João Luiz Telles Penetra were found following their disappearance on 23 June 2012.
Almir Nogueira de Amorim and João Luiz Telles Penetra, or "Pituca" as he was known, were both leaders of the Associação Homens do Mar – AHOMAR (Association of Sea Men) which was set up in 2009 to defend the rights of the fisher-folk working in Rio de Janeiro, and particularly those affected by the construction of a gas pipeline for Petrobras. Since the founding of the organisation its members have reported being subjected to death threats, physical attacks and killings. According to AHOMAR's members, the attacks are perpetrated by people linked to death squads, security guards hired by the companies in charge of building pipelines and militias operating in the region.
READ MORE: http://www.frontlinedefenders.org/node/18768
at June 30, 2012 No comments: 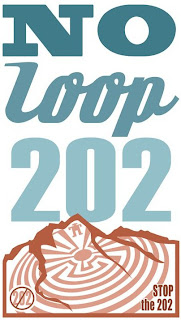 Pangea Deception in ‘No Build’ Option


PHOENIX, AZ — Developers behind Pangea Corporation and Phoenix District 6 Councilmember Sal DiCiccio have threatened construction of Loop 202 freeway through Gila River Indian Community (GRIC) regardless of a recent vote against the proposed freeway.

Joey Perez, of Tempe based corporation Pangea, recently deceived the public on the status of the proposed Loop 202’s extension.

In a May 20 Arizona Republic article titled Gila River tribe may hold vote on Loop 202 freeway effort, Perez stated, "I've talked to community members and I've talked to landowners, and a vast majority of them ultimately feel very deceived by the no-build group and the community for not communicating correctly that if the 'no build' won, the freeway would still be built."

Perez, a Gila River Indian Community member and partner at private land development corporation Pangea, called the original referendum flawed because an option to vote "no build" was insufficiently explained.

Sal DiCiccio, District 6 councilmember, also provided misinformation in the same article regarding the freeway’s status. According to the Arizona Republic, DiCiccio and “others” have said, “’No Build’ was never a valid option.”

The Arizona Republic article further reported, “Officials from the Maricopa Association of Governments (MAG) have said planning for the $1.9 billion, 22-mile freeway will continue despite the vote.”

On February 8, 2012 GRIC members voted for the “No Build” option for the proposed202 freeway to prevent desecration of South Mountain, which has been held sacred since time immemorial. South Mountain is an area full of cultural significance to the Akimel O’odham and the Pee Posh, the two tribes that comprise that Gila River Indian Community.

“The fact of the matter is that it is not currently nor has it ever been predetermined for the Loop 202 to be expanded,” said Jezz Putnam. “A vast majority of community members from Ahwatukee, Laveen and GRIC have opposed freeway expansion. Due to widespread opposition, the Loop 202 has yet to be expanded since the nearly 30-year-old plans for expansion originated.”

“The fact that a corporation such as Pangea is now heading the efforts to expand the freeway through GRIC should also raise concerns,” said Putnam. “It has been the tribe’s formal decision through resolutions and voting to oppose the freeway. Why is a corporation leading the discussion on pushing the loop 202 on GRIC residents?”

Where would the promised $2,000 for GRIC members each come from? How can Pangea, a private corporation, guarantee that payoff from the federal government? IfPangea has secured those funds, why couldn’t that money aid the construction of healthier alternatives to freeways that residents in Laveen and Ahwatukee have asked for? Another question regarding Pangea’s statements about their petition is how exactly could Pangea limit truck traffic from using the freeway if it were to be expanded.

In Arizona Department of Transportation’s (ADOT), Frequently Asked Questions pertaining to the Expansion of the Loop 202 ADOT says: “As the process moves forward, ADOT and MAG will continue to coordinate with the Community [GRIC] on remaining concerns and potential methods for mitigating those concerns.”

We ask, why should the process move forward at all? The concerns of the Gila River Indian Community have not been addressed by ADOT.Paloma Allen, a member of the Gila River Indian Community and a volunteer with Gila River against Loop 202 noted, “As 202 stakeholders, ADOT has violated our rights. It’s been about 25 years we’re waiting on that EIS [Environmental Impact Statement] from them. It’s required by law, and we have every right to know how our land would be impacted. I feel no vote, no Pangea petition, no further discussion about the 202 is warranted until we all have the basic facts about what the freeway could do to our clean air, our health, and our heritage.”

Why hasn’t GRIC been respected for not wanting the freeway on their land? And, most importantly, why would anyone be expected to vote on freeway expansion prior to seeing the Environmental Impact Statement?

We've Only Just Begun: Standing up for the Rights of All in Arizona 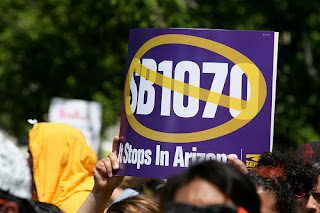 By Victoria Lopez, ACLU of Arizona at 4:24pm
http://www.aclu.org/blog/immigrants-rights/weve-only-just-begun-standing-rights-all-arizona
The highest court in the land has had its say. Politicians and media pundits have had their news cycle. And in Arizona, we’re back to where this all begins and ends—where the resolve of people across the state will again be tested in the coming weeks and months as the “show me your papers” provision of SB 1070 is implemented.
In Arizona, part of that resolve requires simply sorting out the facts. In their zeal to claim victory, Gov. Jan Brewer and others in Arizona have incorrectly announced that SB 1070 would take effect immediately. Inaccurate statements such as these are irresponsible and muddy the already dark waters. Yesterday, civil rights organizations, including the ACLU of Arizona, sent a letter to the attorneys representing Gov. Brewer and other defendants in the Friendly House v Whiting case, explaining that the court order forbidding implementation of SB 1070's racial profiling provision, Section 2(B), remains in place unless and until it is modified by a further order from a federal court. Until that time, no law enforcement agency in Arizona should implement Section 2(B).
In the meantime, on the ground, we’ve only just begun. As the Court foreshadowed, many legal questions about Section 2(B) remain to be resolved. Together with a coalition of civil rights groups, the ACLU is moving forward in Friendly House v Whiting, our legal challenge that raises the exact claims left open by the Supreme Court – including claims that SB 1070 is discriminatory, will lead to racial profiling, and invites the unlawful arrest and detention of people of color, including many born in this country. Several of the plaintiffs in our case have already faced racial profiling and unlawful arrest by local police, or are afraid that they will be discriminated against because of the color of their skin.
Read more:
http://www.aclu.org/blog/immigrants-rights/weve-only-just-begun-standing-rights-all-arizona