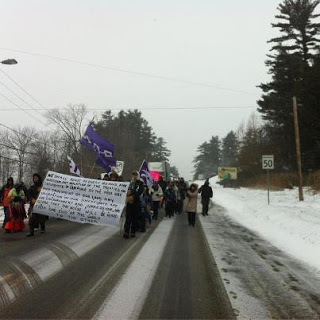 
(ANCHORAGE) The Idle No More grassroots protest movement that started in the province of Saskatchewan has stretched across Canada and is now being joined by Alaskans who are concerned about the threats to Alaskan waters and salmon from British Columbia’s (BC) aggressive industrial development plans.  Indigenous Peoples and supporters will host an Idle No More rally at Town Square Park downtown Anchorage at noon on Friday, January 11th.


“We would like to show solidarity with our indigenous brothers and sisters in Canada that are facing the same issues our tribal peoples are faced with here in Alaska,” said Delice Calcote of Alaska Inter-Tribal Council.  “Our mission is to protect customary and traditional use of our subsistence resources.  Protect our subsistence or expect resistance.”


This demonstration is more than just a show of solidarity with Indigenous activists in Canada. Participants are also hoping to raise awareness about the fact that BC’s major industrial development plans and drastic changes to Canadian environmental laws also pose serious risks to salmon, water quality and traditional uses in the Southeast Alaska/Northwest BC transboundary region.


Carl Wassilie of Alaska's Big Village Network said that “Native and non-native Alaskans need to stand up and be counted when it comes to protecting our water, salmon, and indigenous people’s rights. Our representatives are shirking their responsibilities and largely ignoring the threats to our resources from Canada’s massive rush to industrial development in the headwaters of major salmon rivers like the Taku, Stikine and Unuk and weakening of important environmental protection laws. History tells us ignoring this is a bad idea.”


The Idle No More movement was sparked by changes to laws that protected all of Canada’s “navigable” waterways and that govern Indigenous land tenure. Recent changes to the Environmental Assessment Act, Fisheries Act and Navigable Waters Protection Act mean there will be substantially less federal oversight over decisions about major industrial developments, such as the many mines, roads and hydro-electric  projects that are proposed on the BC side of the border. Many of these projects would have direct impacts on rivers that provide drinking water and salmon to Alaskans.  The most recent changes are but part of a larger pro-industrial development agenda that is being implemented without meaningful consultation with the Indigenous peoples of Canada.


“Federal oversight of mining in Canada hasn’t been perfect, but it has played an important role in reducing risks to the environment,” said Ramsey Hart of MiningWatch Canada. “Recent weakening of environmental regulations is taking us in the wrong direction, which increases the threat that poorly planned and risky projects going forward on a massive scale will pollute Alaskan waters, harm salmon and threaten the livelihoods of Alaskans who depend on these resources.  Alaskans have reason to be concerned about what’s proposed in the headwaters of rivers like the Taku, Stikine and Unuk.”


BC mining operations have a history of polluting U.S. waters.  For example, acid mine drainage from the Tulsequah Chief mine has been leaking into the Tulsequah and Taku rivers for over 50 years.  Pollution from a smelter in Trail, BC ended up in Lake Roosevelt, in the Washington state portion of the Columbia River.


“The BC government and the mining industry have shown little regard for downstream interests in Alaska,” said Chris Zimmer of Rivers Without Borders. "The double whammy of massive industrial development and the gutting of environmental laws is the biggest threat to water quality and salmon in major transboundary wild salmon rivers like the Taku, Stikine and Unuk we have seen in decades.  We need our elected leaders to immediately engage with Canada to ensure that Canada’s actions do not harm our interests.”
at January 10, 2013 No comments:

Mohawk Nation News 'Traitors Among Us'

TRAITORS AMONG US
MNN.  Jan. 10, 2013. Time to drop the Black Wampum.  The Indigenous People charge the Band Councils, Assembly of First Nations, provincial and territorial native organizations and all ‘Indian’ entities of the Corporation of Canada with “conspiracy” and “fraud”.
Wampum 44 of the Kaianerekowa, provides that the Women are the “progenitors of the soil”. Our duty is to preserve the land’s integrity on behalf of all our relatives.

Traditionals carry out penalty for treason

Wampum 58 provides that as you knowingly betrayed and violated the will of the People, you have conspired to commit treason. You worked with a foreign entity to try to dissolve and destroy our title and birthright. As corporate agents of Canada you have no authority to enter into any agreements or contracts for any of our lands or possessions with them or any corporate entities.  You represent only yourselves and those who voted for you. You are helping them to fraudulently use our land and resources as collateral to raise money on the international stock market to come in and rape our land.
“Any chief or other persons who submit to laws of a foreign people are alienated and forfeit all claims in the Iroquois nations, and to those of our Indigenous allies who abide by the law of the land, the Kaianerekowa”.  These traitors are not in but out of the canoe.

Your connections with these foreign entities should be thoroughly investigated, starting with the shareholder list of the Corporation of Canada.
If the Corporation of Canada wishes to enter into any formal agreement with the true Indigenous People, they must go through proper protocol with their Queen.  Order-in-Council UK [1704] affirms that a new impartial court can be set up to hear the land disputes on Onowaregeh.  We would be in agreement with countries such as Venezuela, Iran, Panama, Netherlands and Estonia setting up this impartial third party court.
When Canada has no traitors, the corporation cannot trade the resources they have been stealing from us.

Corporate traitors on the hunt.
Senator Patrick “House Injun” Brazeau said that the chiefs have to be prepared with a “business plan solution”.  Our solution is to get rid of assimilated Indians like you.
The settlers to legally enter our land made agreements according to The Great Peace of Montreal 1701 based on the Guswentha. The Royal Proclamation 1763 affirmed this arrangement.  Parliament represents the party that agreed to live here, but reneged on it. At this point we have no choice but to control our own destiny.
Traitors are worse than the enemy, the lowest of the low.  Every culture loathes them.  They help foreign governments overthrow, make war against and seriously injure their own people. They undermine us from within.

Traitors have been punished by public execution, hanging, shooting at dawn and beheading. Russians shot their traitors in the head and made the family pay for the bullet.  In our way, the women make the decision to drop the black wampum in front of the traitor. Traitors would be banished and shunned forever, their name never to be heard ever again. Their family has no rights and no voice.  The seed dies.
Among many, one of the foremost traitors among us is Oren Lyons from Onondaga.  He requested Canada to send the army on us in the 1990 Mohawk Oka Crisis.  We were peacefully protesting the expansion of a golf course on our burial and ceremonial site.
As the Field Warriors say:  “You want a statue, or get an Order of Canada, be a traitor.”

Indian Traitors soon to be extinct like dodo bird
Dedicated to the soon-to-be-extinct corporate Indian traitors,  Mick Jagger sang:  “I’m on the run, I hear the hounds.  My luck is up, my chips are own.  So good-bye baby, so-long now.  Wish me luck, I’m going to need it, child.  The hand of fate is on me now.  The hand of fate is heavy now”.
MNN Mohawk Nation News kahentinetha2@yahoo.com  For more news, books, workshops, to donate and sign up for MNN newsletters, go to www.mohawknationnews.com  More stories at MNN Archives.  Address:  Box 991, Kahnawake [Quebec, Canada] J0L 1B0 Tar Sands Blockaders in Oklahoma launch the first action in the state in solidarity with Idle No More, the Unis'tot'en Camp, and people everywhere fighting extraction and ecocide. We're excited about escalating and expanding our campaign of sustained direct action!

View more at: http://www.tarsandsblockade.org/first-tar-sands-blockade-oklahoma-action-no-tar-sands-on-stolen-lands/
at January 10, 2013 No comments: