Standing in the vicinity of Concession 3 Walpole and Cheapside Road, Haldimand County, Hazel Hill, board member of the Haudenosaunee Development Institute, describes how an Edmonton, Alberta based power corporation, Capital Power Corporation, known in Ontario as Capital Power GP Holdings Inc. and Capital Power L.P., has decided to ignore Native treaty rights in favour of the illegal construction of numerous wind turbines on Haudenosaunee land.
The HDI policies, as adopted in Council June 5, 2010, state:
We want the land that is ours. We are not interested in approving fraudulent dispossessions of the past. We are not interested in selling land. We want the Crown to keep its obligations to treaties, and ensure all Crown governments-federal, provincial and municipal-are partners in those obligations. We want an honourable relationship with Canada.
That relationship, however, must be based on the principles that were [set] in place when our original relationship with the Crown was created. That is the rule of law that we seek. It involves the first law of Canada-the law that Canada inherited from both France and Britain. It is the law of nations to respect the treaties, to not steal land, or take advantage of indigenous peoples by legal trickery. As the Supreme Court of Canada has frequently stated, where treaties are involved, the honour of the Crown is always at stake.
We seek to renew the existing relationship that we had with Crown prior to 1924. That relationship is symbolized by the Tehontatenentsonterontahkwa ("The thing by which they link arms") also known as the Silver Covenant Chain of Peace and Friendship. Our ancestors met repeatedly to repolish that chain, to renew its commitments, to reaffirm our friendship and to make sure that the future generations could live in peace, and allow the land to provide its bounty for the well-being of all the people. The Covenant Chain symbolizes our treaty relationship, also symbolized by Tekani Teyothata'tye Kaswenta (Two Row Wampum), which affirms the inherent sovereignty and distinctness of our governments. An essential part of the relationship is our commitment to resolve matters through good-faith negotiation between our governments, including consultation on any plans, which might affect the other government or its people. haudenosauneeconfederacy.com
at January 18, 2013 No comments: 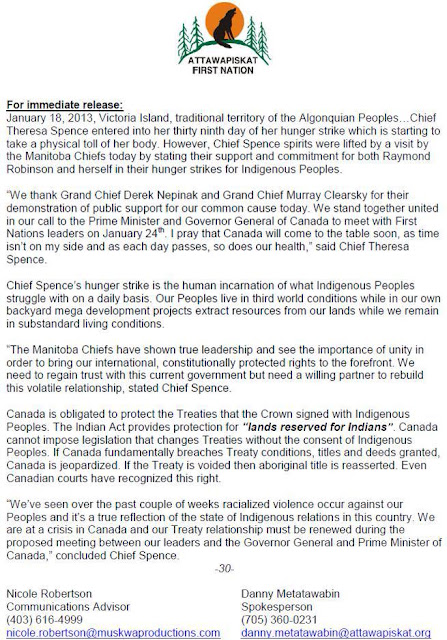 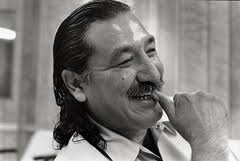 Greetings, my Relatives and Friends!


It has come to my attention in the last week or so that a lot of our young people and women especially are standing up in support of our Indigenous Brothers and Sisters in Canada. It really does my heart good to see the activism and concern of the different generations of People coming together. There is great potential for educating those who don’t know about the perils that face our environment.
With personal knowledge I totally understand the difficulties of getting people to take action to bring about change. The direction that the world corporations have taken historically and today have largely been at the expense of the Indigenous People around the world. I encourage anyone who reads these words to become involved as much as possible to stem this tide of environmental destruction taking place.
The health of our environment transcends across all walks of life. If we don’t have healthy water, healthy air, healthy food, and healthy children we will not have a healthy future. That is the law. I can’t say enough how important it is that we communicate and join hands with our Indigenous Brothers and Sisters all over the world. We need to join together to bring about the change of these corporations who trample on our environmental rights.
I encourage you again to seek out the organizations that are already involved in this endeavor, and remain united with one another. I will encourage all the People that I work with and have worked with to do their part in this struggle. I’ll close for now, but in the Spirit of Chief Teresa Spence keep on keeping on, and idle no more!

In the Spirit of Crazy Horse
Leonard Peltier
at January 18, 2013 1 comment:

Dine' Bidziil 'One Mind, One Voice, One Prayer' 
DINE BIDZIIL: "One Mind, One Voice, One Prayer"

MNN. JAN. 17, 2013. US & CANADA corporations merged on February 4, 2011. They have the same shareholders, owners and business plans for illegal resource extraction. Canadians and Americans have not been informed. The EU Times in Europe made the announcement on January 17, 2013. In effect, this is Hitler’s 1938 “Anschluss”, the takeover of Austria by Germany. Canada is now a substate of the US. http://www.eutimes.net/2011/02/obama-creates-worlds-first-superstate-with-us-canada-merger/

In 2004 President Bush and Prime Minister Martin signed the “911’ Agreement allowing the US military to invade Canada anytime the US deems it necessary to eliminate “terrorist threats”. Essentially, Canada is under martial law.
Our Indian Trust Fund is over $3 trillion, coming from monies set aside from the exploitation of our resources. It is set aside according to international law treaty requirements. The oligarchs who run the world are stealing it. The banks, Vatican, Queen, World Bank, International Monetary Fund and the families in charge have been dividing it amongst themselves. The fake bankers’ world economy is based totally on continual war.
Canada is the third biggest country in the world. The oligarchs cannot make war without our resources. The shareholders of the country corporations illegally sell our raw materials to each other.
The corporate merger of 2011 benefits big business, banks, big oil, drug companies and their war-making machine. Our materials are needed to attack anybody who stands in the way of resource extraction. The military tell Congress, Senate and Parliament who will be bombed, or their economy will fail.
Our materials make weapons to kill our brothers and sisters in all parts of the world. We can stop the war by stopping the resource extraction from our homeland. It violates our laws.
Since WWII the US military has invaded 60 countries to continue imperial war. To make guns, bombs, tanks and weapons of mass destruction, the raw materials come from Canada, such as coal, oil, gas, food, wood, aluminum, steel and compites.
Tanks need iron, aluminum, oil and saltpeter. Guns need zinc, iron, steel, magnesium, brass, polymer, ceramis, wood and fiber glass. Bombs need plutonium, radio active elements, explosives, isogn, mega cyte, mexallon, nocxium, pyerite, titanium, zydrine and tailings from nuclear power plants. Gunpowder needs sulphur and charcoal. Computers need copper, lead, aluminum, platinum, tin, gold, silver, bromine and mercury. Electronics need nickel and chromium.
Except for rubber, all these materials are available in Canada.

War-mongers spread lies through deception, disinformation and finally false flag wars. They scream, “Get rid of the Indian Act. Bring in Bill C-45 to expedite resource extraction”. The genocidal Indian Act is illegal and will be eliminated. Control of Great Turtle Island will return to us, as Creation intended.
We will stop war the world over by stopping the illegal extraction. We will never support any war. Kaianerekowa directs us to support peace everywhere on earth through mutual consensus.

United to stop war.
As Edwin Starr sang: “War means tears to thousands of mothers’ eyes. When their sons go to fight and lose their lives. I said, WAR, huh, good God. Y’all, what is it good for. Absolutely nothing. Say it again.” http://www.youtube.com/watch?v=_d8C4AIFgUg
MNN Mohawk Nation News kahentinetha2@yahoo.com For more news, books, workshops, to donate and sign up for MNN newsletters, go to www.mohawknationnews.com More stories at MNN Archives. Address: Box 991, Kahnawake [Quebec, Canada] J0L 1B0
at January 18, 2013 1 comment: