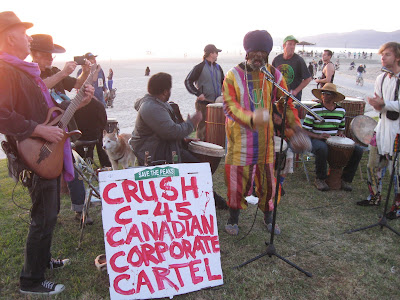 Photo by Sabin Portillo! Thanks for sharing with Censored News!

MNN.  Jan. 22, 2013.  All the money to run the Corporation of Canada comes from interest on the Indian Trust Fund. This revenue comes from exploitation of our land and resources.
In 1907 Canada declared us as non-persons so they could control our money, lives and future.  They gave themselves power of attorney without our permission. According to the Trust Fund Management System, the Indian Affairs Minister can manage our money as if he was our parent. He can collect, receive, hold it, decide how to manage and spend it without our knowledge or consent.

The shareholders of the Corporations of the United States, Canada and the UN are getting filthy rich playing with our trust funds. Very little comes to us.  Most goes to their friends, corporations and governments.
Indian Affairs website states that “any licences, permits and other instruments to individuals and organizations” that exploits our resources belongs to us. Otherwise, there would be no need for a cabal known as Indian Affairs. They distribute 10% or more of the interest to the Vatican, International Monetary Fund, World Bank, international banks, the Queen and the bloodline families.
Indian Affairs suspense accounts are from businesses run on our behalf by the Corporation of Canada. Public Accounts of Canada monies cannot be disbursed or given to us.
The Environmental Studies Research Fund Accounts belong to us. Special Accounts are individual and band accounts which we never see.

Indian Estate Accounts are from deceased Indigenous, or those deemed incompetent and “missing”.  They collect and hold money on dead Indians.  On every child monies due is collected and kept.
Not included are the vast royalties from deals between the provinces and multinational corporations for our natural resources. The following table shows what Indian Affairs admits to taking and distributing to each province. They answer only to the bankers.

Payouts to provinces of oil, gas, royalties, rents & bonuses.
It’s all ending.  These new omnibus bills like C45 shows that the Corporation of Canada is trying to steal whatever it can and then flee with the loot.  We will not be extinguished through their new fascist bills.
We will put in place a fair distribution system for our people to take control of our land and resources.
Sir William Johnson, King George’s representative in North America, told him that the Iroquois were not his subjects. “Any man who dared tell us we are subjects of a foreign power, no sooner were those words spoken would his throat be split. You better have a good army at your back if you make that claim.  We are slaves to no one.”

All resources are ours. Our funds are illegally held in trust for us by some very untrustworthy people. Remember that the colonial band and tribal councils are all incorporated and the councilors are chief executive officers. They try to steer the canoe for the boat master, violating the Guswentha.
As Mick Jagger sang:  “Just as every cop is a criminal, and all the sinners saints.  As heads is tails, just call me Lucifer.  I’m in need of some restraint.”  Misdirection, confusion, greed, will all be cast down.


TODAY! Alaska 'NO!' to Barrick and Nova Gold's Donlin Gold Mercury Mine

Media Alert: No Donlin Gold Mercury Mine in Alaska

By Alaska's Big Village Network, Carl Wassilie
Center for Water Advocacy, Nikos Pastos
Alaska Inter-Tribal Council, Delice Calcote
Censored News
ANCHORAGE -- A group of concerned global citizens, indigenous peoples and Yup'ik fisherpeoples are demonstrating opposition to the proposed Donlin Gold mine in the Kuskokwim watershed at the Donlin Gold Environmental Impact Statement public meeting in Anchorage, Alaska. The groups have concerns about one of the worlds largest proposed mega-gold mines that has a footprint that extends into the Alaska marine transportation corridor. The proposed mine's impacts will result in permanent changes to the Kuskokiwm River's Yup'ik peoples' cultural survival, subsistence resources, and health. This mine brings enormous cost to fish, wildlife, peoples and habitat with the massive amount of contaminants; such as mercury, arsenic and selenium, that are to be permanently leached into the Kuskokwim watershed.
Barrick Gold has a history of contaminating peoples' water supply on a global scale and Nova Gold has a history of mishaps in Alaska including the complete failure of the Rock Creek mine in Nome, Alaska, in which 'streamlined permitting' killed 2 workers and resulted in terrible planning for the water balance of the mining operation.

The groups would like to ensure there are comprehensive studies to address the transportation and storage of extremely toxic elements and compounds, like mercury; as well as addressing the risks and threats to communities along all of Alaska's coastline along the transportation routes. Donlin Gold's proposal does not have existing baseline science to determine the comprehensive mercury risk from "cradle to grave" on the health of the people and environment, considering the multitude of pathways that mercury bio-accumulates in the human body.

Acid Mine Drainage (AMD) is a major concern of these groups in the proposed Donlin Gold mine. AMD can cause severe health, reproductive and developmental impacts to living organisms; including humans. Some of these concerns have been discussed extensively in the EPA's draft Bristol Bay Watershed Assessment with the Pebble Mine.

The groups are calling on Anchorage and Southcentral Alaska residents to get involved in this Donlin Gold EIS to ensure baseline science and gas supply feasibility studies are included for the proposed 313-mile 14-inch gas pipeline from Cook Inlet to the middle of a Kuskokwim wilderness area with no infrastructure and declining supplies of natural gas in Cook Inlet.