Zapatistas Marcos Part 5 'Them and Us'


Them and Us Part 5: The Sixth by Subcomandante Marcos 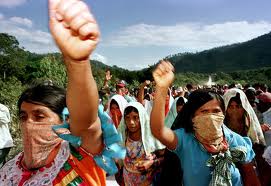 To: The compañeros adherents to the Sixth Declaration of the Lacandon Jungle all over the world.

From: The Zapatistas from Chiapas, Mexico.

Compas in the Network Against Repression and for Solidarity:

Everyone, greetings from the women, men, children, and elders of the Zapatista National Liberation Army, the smallest of your compañeros.

We've decided that our first word specially directed at our compañeros [who are adherents to] the Sixth should be made known in a space of struggle, such as the Network Against Repression and for Solidarity. But the words, feelings, and thoughts that are sketched here are also meant for those who are not here. And, above all, they're for them.

We would like to thank the support that you have given to our communities, to our Zapatista support bases and to the prisoners who are adherent compass in Chiapas, throughout all this time.

Your words of encouragement and your collective hand that connected with ours are guarded in our heart.

We are sure that one of the points to be discussed in your meeting will be, or has already been, setting up a campaign to support the compa Kuy, to denounce the attack that he was subjected to, and to demand justice for him and for all of the others who were injured on that day, to demand unconditional freedom for all of the detained in Mexico City and Guadalajara during the protests against the imposition of Enrique Peña Nieto as head of the federal executive branch.

Not just that, but it is also important that this campaign contemplate fundraising to support compa Kuy with his hospital bills, and for the costs of his subsequent recuperation, which the Zapatistas hope will be soon.

To support this fundraising campaign, we've sent a small amount of cash. We ask you, even though it might be small, to add the money you're able to get together for our compañero in the struggle. As soon as we can put together more money, we will send it to whomever you [the Network Against Repression] designate for this work.

The Sixth is a Zapatista convocation. To convoke is not to unite. We aren't trying to unite under a leadership, neither Zapatista nor any other affiliation. We do not seek to co-opt, recruit, take anyone's place, feign, fake, cheat, direct, subordinate, use. The destination is the same, but the different, the heterogeneity, the autonomy of the ways of walking, are the Sixth's richness, they're it's strength. We offer and will offer respect, and we demand and will demand respect. One adheres to the Sixth without any other requisite other than the "no" that convokes us and the commitment to construct the necessary "yeses."

To end this missive (which, as is evident, has the disadvantage of not having a video or song that accompanies it and completes the written version), we want to send our best hugs (and we only have one) to the men, women, children, and elderly, groups organizations, movements, who however each one of you calls yourselves, who have never during all this time distanced us from your hearts, and resisted and supported as compañeras, compañeras, and compañeroas that we are.

We are the Sixth.

It's going to be very difficult.

Our pains won't be lessened by opening ourselves up to those that hurt all over the world. The path will be the most torturous.

We will struggle.
Maybe we'll die.

But one, ten, one hundred times, we'll always win always.

Translated from the original Spanish by Kristin Bricker.

Part IV From the Pains Below
http://bsnorrell.blogspot.com/2013/01/zapatistas-marcos-iv-the.html
at January 27, 2013 No comments:

International Treaty to Protect the Sacred from Tar Sands Projects

MNN. JAN. 26, 2013. We are subduing the enemy without physically fighting them. Now he is ours. The bridge is there, but they will not be able to escape. Their only retreat is to jail or death.

Our enemy is irritated because of their own arrogance, which is their greatest weakness. The paradigm is shifting. Their “slaves” want to be free. The path of their subjects leads to the Great White Roots of Peace. They are already coming to us to open their own minds. Once their minds awake to the truth, no one can put them back to sleep. The peace will return to us and our Mother as our ancient teachings direct. This will be the end of the oligarchs here on Great Turtle Island.
The pyramid will be taken apart from the inside. The bottom shall disassemble the top. The rest of the hierarchical system will collapse. It is against the laws of nature.

Row, faster, corporate Indians!
Canada Prime Minister Harper’s main role is to ramp up resource extraction for their planet trashing plans. His corporate Indians [AFN, band councils] are all following the same business plan. The only time line that puppet Shawn Atleo is going to make is to get on the same boat as a galley slave with his masters and sail off to prison for the traitor that he is.
Atleo wants to rejuvenate education [brainwashing] for the Indians, not himself. He knows the truth about the real brutal history of his corporate masters. His knowledge of the genocide and stolen trust fund will land him in a Nuremberg cell with his best friend, Herr Harper. He will say, “I was just following orders!” But the orders did not come from the women of his nation. This is high treason against his own people. All the other band councilors and the SS Indian Affairs system will be on the same big boat to Europe. Since we won’t have prisons here, they will have to go home. They’ll be witnessing from afar the rebirth of our Mother Land, Great Turtle Island, from their jail cells in the Fatherland [Europe].
Iceland is now the only free country on earth because the bankers are all in jail and they’re printing their own money. The banks collapsed because all the deficits owed to them were proven to be frauds. Private companies like airlines or other businesses fail when they are mismanaged or proven to be fraudulent. So they did. Banks are high stakes companies, like casinos. They thought the house always wins. Ordinary people should not have to pump up the banks through their taxes. The financial sector was huge and gobbling up all the professionals. It is now the smallest, as it should be. When financial sectors failed, other businesses blossom.

Atleo wants to cooperate with economic growth, more trade with western countries to build weapons that continue the never ending war on terror throughout the planet. This goes against the supreme law of Great Turtle Island. He must go.

As Jimmie Rodgers wrote: “Well, I Had a friend named Rambling Bob, who used to steal, gamble and rob. He thought he was the smartest guy in town, but I found out last Monday that Bob got locked up Sunday. They got him in the jailhouse way downtown”. http://www.youtube.com/watch?v=mZI54Y8qf70 Original: http://www.youtube.com/watch?v=vSq8mnDH_1o
MNN Mohawk Nation News kahentinetha2@yahoo.com For more news, books, workshops, to donate and sign up for MNN newsletters, go to www.mohawknationnews.com More stories at MNN Archives. Address: Box 991, Kahnawake [Quebec, Canada] J0L 1B0
at January 27, 2013 No comments: