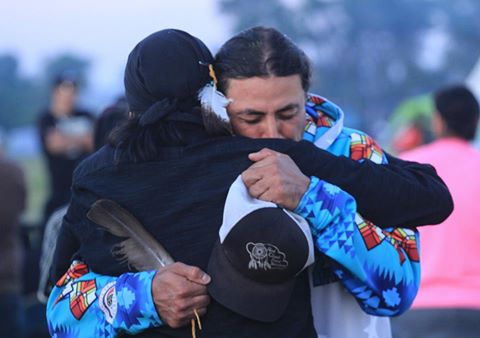 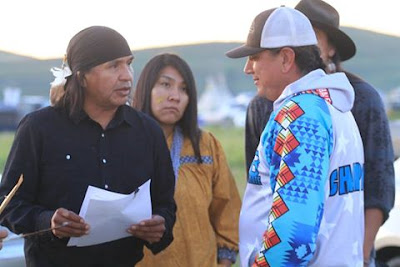 Wendsler Nosie Sr, San Carlos Apache Councilman, and leader at Apache Stronghold, traveled to North Dakota to offer support and prayers to Standing Rock Sioux Tribe. "Wendsler and Standing Rock Chairman David Archambault II met Saturday as two leaders and two men who understand what it means to fight for their people, their waters and their land. The Apache Stronghold have been fighting to protect their sacred site Oak Flat in Arizona for 10 years with going on two years occupation from the foreign mining company, Rio Tinto." (www.apache-stronghold.com) Photo and caption by Allie Fredericks

CANNON BALL, North Dakota -- Apache Territory has been taken away piece by piece from the beginning of the Reservation system. It began with the loss of the Chiricahua Reservation, the loss of the Aravaipa lands, then after the San Carlos Reservation was established, the loss of Mt. Graham for its timber, the loss of the eastern side for Copper, Silver and Water and then the loss of the western side for Copper, and Silver again. Just like the Apache, Sioux lands have been taken away for decades, beginning with a 1851 treaty that was not honored than another treaty in 1868, then gold was found in the Black Hills, then the 1941, 1954, and again in 1960 the reservation was reduced for Dams and flooding. Now they are threatened by an oil pipeline that is less than one mile away from their northern border that threatens their water source which is upstream.
The Sioux are fighting to keep the oil pipeline out of the watershed of sacred tribal lands, lands that are ancestral homelands. Likewise the San Carlos Apache Tribe and Apache Stronghold are trying to keep a sacred site, Oak Flat, from being destroyed by Resolution Copper and protecting the water that will be taken to mine the copper that will deplete the San Carlos water aquifers.
Wendsler Nosie Sr. and Apache Stronghold stand in Solidarity with the Standing Rock Sioux to protect what is left. Wendsler Nosie Sr. wrote in a letter from the Stronghold to the Standing Rock Sioux Chairman Archambault II, “As indigenous people, the recent stand against the Dakota Access Pipeline, and the inevitable loss of water and sacred places affects all people. Your issues are our issues." 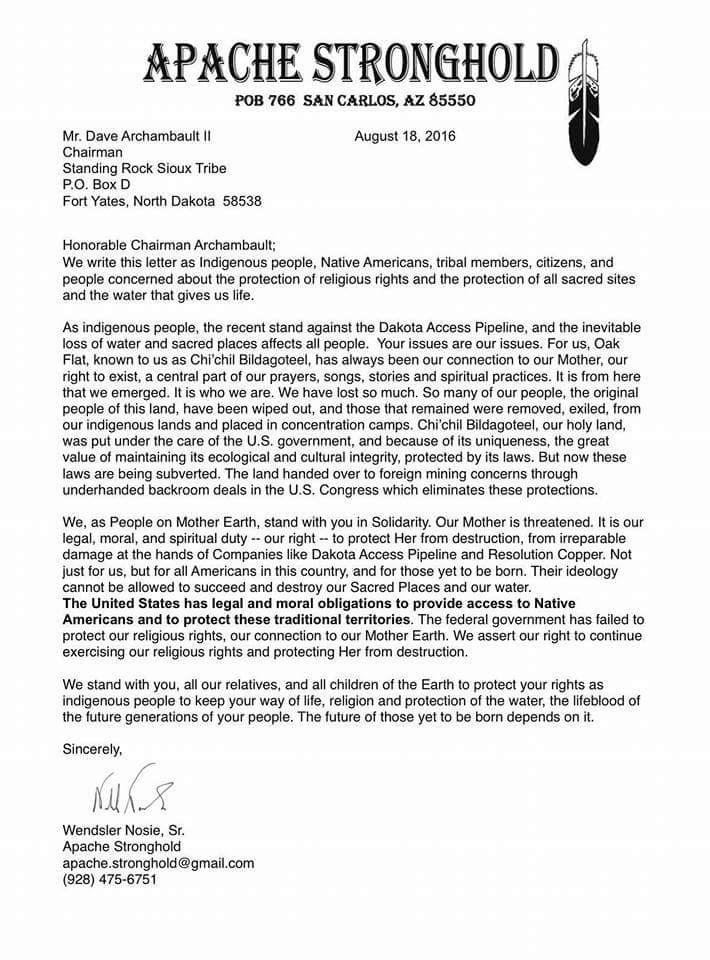