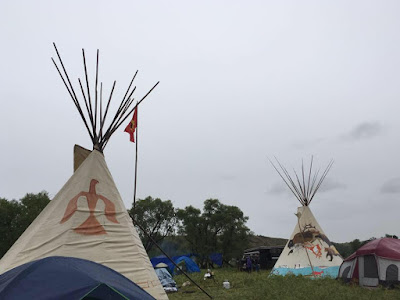 By Cody Hall
Censored News
Cannon Ball River, 1851 Ft. Laramie Treaty Territory
On Monday, August 22, 2016, the Morton County ND Board of Commissioners held a special session with a sole agenda item to address the “civil unrest” occurring at the location of the Dakota Access Pipeline
construction site.
After hearing a brief statement from Morton County Sheriff Kyle Kirchmeier, the Board of Commissioners approved an Emergency Declaration based on ND Governor Jack Dalrymple’s State of Emergency Operations Plan issued on August 19.
Dalrymple’s order will allow the state to access up to $1 million dollars in Homeland Security funding to “…assist local and tribal officials to implement appropriate law enforcement action.”
American Indian Movement co-founder Clyde Bellecourt issued a video response to the county and state actions, which can be viewed on facebook.com/RedWarriorCamp.
"We want to lift the cloud of violence being put on us by inviting people to the camp.  We want to put a call out to invite human and civil rights silent observers to come and bear witness that we are nonviolent and to share what they witness with the governor," stated Bellecourt.
Bellecourt’s invitation comes on the heels of Kirchmeier’s allegations that the pipeline protestors are armed with “guns and pipe bombs”.
“This is about the future of the children and unborn generation of all races.  We must protect our water," added Bellecourt.
Delegations from many native nations and non-native allies continue to arrive daily at Red Warrior Camp.
The Standing Rock Sioux Tribe initiated a lawsuit against the U.S. Army Corps for violating their own procedures to fast track the approval of the $3.8 billion dollar crude oil pipeline.  An injunction hearing was held today in Washington, D.C.
The Red Warrior Camp remains committed to nonviolent direct action to stop the construction of the Dakota Access Pipeline.
Media Contact:  Cody Hall
Organization:  Red Warrior Camp
Email Address:  RedWarriorCamp@gmail.com
Social Media:  Facebook.com/RedWarriorCamp , @ZuyaLutaOceti on Twitter
at August 24, 2016