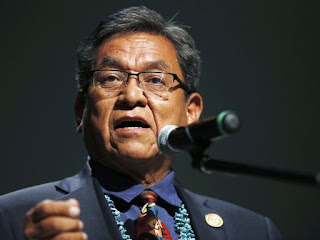 WINDOW ROCK-Navajo Nation President Russell Begaye and Vice President Jonathan Nez issued a letter today supporting the Standing Rock Sioux Tribe in their opposition to the Dakota Access Pipeline.
The Standing Rock Sioux have been fighting the construction of the Dakota Access oil pipeline, which is proposed to be built under the Missouri River on Treaty lands a half-mile from their reservation. According to the Standing Rock Sioux, their water supply is being threatened by the construction of the Dakota Access pipeline.
“We stand in solidarity with our brothers and sisters of the Standing Rock Sioux Tribe as they defend the encroachment of potential environmental disasters along their traditional border,” President Begaye said.
Native American tribes are constantly fighting to protect the sanctity of their natural resources and tribal territories.
Often this includes opposing the development of natural resource industries or construction developments that are proposed near or adjacent to sacred tribal lands.  It also includes protecting the purity of water sources and opposing the mining of caustic or radioactive elements.
“Time and again, Native American tribes have faced encroaching development upon tribal lands from industry and the federal government. Industrial interests have damaged Indian lands and left tribes with the legacy of cleaning up,” Vice President Nez said. “From uranium mining to the recent Gold King Mine spill and Dakota Access Pipeline, these issues continue.”
In this day and age, the need for tribes to band together is critical in uniting against outside interests. It shows the government and corporations that Native Americans are serious when it comes to defending their lands and resources.
“In defending their traditional homeland against development that could potentially harm their lands and the purity of their natural resources, the Navajo Nation stands in support of the Standing Rock Sioux Tribe,” President Begaye said.
The letter, which is addressed to Standing Rock Sioux Chairman Dave Archambault II, pledges water and other necessities to assist those who are present in the formal resistance and opposition of the Dakota Access Pipeline. 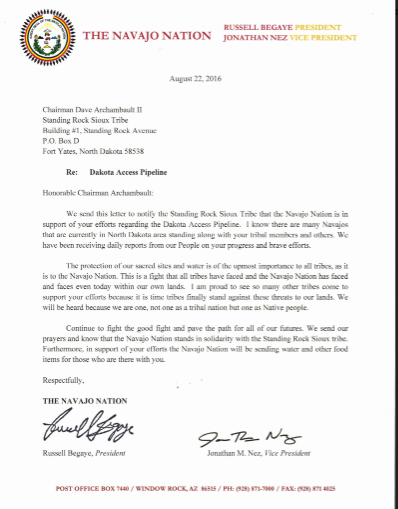