CANNON BALL, N.D. -- Cheyenne River Chairman Harold Frazier sent a letter to President Obama today urging Obama to remember his promise to the Lakota people. Chairman Frazier points out the Army Corps of Engineers has ramrodded construction and permits through without the required consultation with Native American Tribes and has violated Treaty rights. 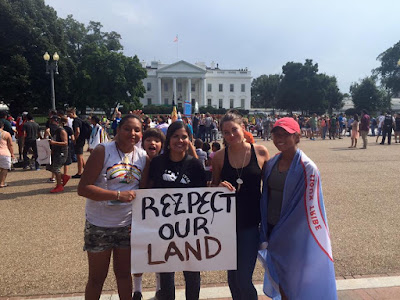 “You pledged to work with our Indian nations and tribes on a nation-to-nation basis to address the issues that matter to us every day.  You came to the Standing Rock Sioux Reservation in North Dakota, and quoted our great chief, Sitting Bull: “Let us put our minds together and see what we can do for our children.”  With all respect, we ask you to put your mind together with ours and see what we can do to protect our children’s lives and health from poison water.”
(Read full letter below.)
The Oglala Sioux and Cheyenne River Sioux are sending buses of Lakotas to the blockade of the Dakota Access Pipeline construction, as the pipeline threatens the Missouri River and water source of the Lakotas. On Friday, Dustin Thompson, community members, confirmed burial places are in the vicinity of the pipeline crew.
Federal law protecting Native American burial places requires the work to halt.
On Friday, Standing Rock Chairman Dave Archambault and Councilman Dana Wasinzi were  arrested as they tried to protect their people from the heavily armed police and private security guards at the pipeline blockade. On Thursday, twelve people were arrested, including Dakota and Lakota women who were thrown around and arrested by police, the North Dakota Highway Patrol and Morton County Sheriff’s Deputies.
The Camp of the Sacred Stones is calling for more support and asking that peaceful protesters come today, Sunday, and bring camping gear, food, water and cooking supplies.
Although President Obama assured Native Americans that the tar sands pipeline through their lands had been halted, this new pipeline is part of a new pipeline system that goes all the way from the Alberta, Canada, tar sands to the Gulf of Mexico. The tar sands pipeline giant Enbridge in Calgary, along with Marathon, just bought into this new pipeline system, which includes Dakota Access Pipeline, and is now threatening land owners throughout the heart of the United States.

August 14, 2016The Honorable Barack ObamaPresident of the United StatesThe White House1600 Pennsylvania Avenue, NWWashington, DC  20500Hon. Sally Jewell, SecretaryU.S. Department of the InteriorJohn_Blair@ios.doi.gov; Fax: 202-208-1821Department of the Interior1849 C Street, N.W.Washington DC 20240Re: STOP DAKOTA ACCESS PIPELINE FROM POISONING OUR CHILDREN’S DRINKING WATERDear President Obama and Secretary Jewell: You pledged to work with our Indian nations and tribes on a nation-to-nation basis to address the issues that matter to us every day.  You came to the Standing Rock Sioux Reservation in North Dakota, and quoted our great chief, Sitting Bull: “Let us put our minds together and see what we can do for our children.”  With all respect, we ask you to put your mind together with ours and see what we can do to protect our children’s lives and health from poison water. Here is a quote from a youth submitted on social media captioning a picture of your visit to the Standing Rock Reservation, “This was the day that you promised to protect our people! This was the day you told our youth you would do whatever it takes to protect their future! Fulfill your promises and help us protect our water!”The Dakota Access Pipeline (DAPL) is a 1,172 mile 30” diameter pipeline that will cross the Great Plains to transport 470,000 to 570,000 barrels of crude oil per day.  The DAPL is planned to cross the Missouri River above the confluence of the Cannonball River, a few steps from the Standing Rock Sioux Reservation in North Dakota.  DAPL threatens the safety and quality of our drinking water, and threatens to destroy the environment of our Sioux reservations along the Missouri River.Under the 1868 Sioux Nation Treaty, the Oceti Sakowin of the Lakota, Nakota, Dakota Oyate or Great Sioux Nation reserved as our “permanent” home:  All the land from the Cannonball River in the North along the low water mark on the east bank of the Missouri River to the Nebraska Border and west to the Wyoming Border.  The Missouri River is wholly within our treaty territory, and over the years, the United States has asked us to cede hundreds of thousands of acres along the Missouri River within our homeland for flood control by the Army Corps of Engineers.Our Sioux Nation tribes use the Missouri River for our drinking water, we have treaty rights to hunt and fish, reserved rights to graze livestock along its banks, and it is our source of water for irrigating crops. Under our Treaty, we own reserved waters in the Missouri River.  Yet, the Army Corps turned its back upon our Sioux Nation tribes and plans to approve the DAPL to run oil under the Missouri River without consulting with our tribal governments.  Indeed, the Army Corps has not even consulted with the Secretary of the Interior and the Secretary of Agriculture who are our partners in our Missouri River tribal drinking water projects.  The Army Corps is violating our treaty rights, statutory rights, and your policy on sustainable Indian nations, President Obama.We have seen the devastation wrought by oil spills in the Gulf of Mexico, where BP had build “fail safe” systems to run its oil platform.  BP’s systems failed catastrophically—despite their best planning.  We have seen government planners provide lead poisoned water to the residents of Flint, Michigan.  We have seen the EPA pour out poison mine waters into Colorado waters in the name of “clean-up,” only to poison Navajo Nation waters downstream.  As the Lakota say, Mni Wiconi—“water is life.” The Army Corps must not risk our children’s lives with the dangerous DAPL project without even conducting an Environmental Impact Statement!Among our Sioux Nation tribes, we sacrificed to protect American cities downstream on the Missouri River from flooding—sacrificed our sacred oak trees, our wildlife, our best river bottom lands, our very homes for flood control.  Do not let the Army Corps of Engineers sacrifice our people again.President Obama, Secretary Jewell we call upon you to honor our treaty and trust responsibility, and help us protect our Missouri River, our drinking water, and our source of life from the DAPL and its danger of life threatening oil spills.  Stop the Army Corps’ intended approval of the DAPL.Sincerely,Harold Frazier, ChairmanCheyenne River Sioux TribeCC:  Hon. Larry Roberts, Assistant Sec’y—Indian Affairs (Acting)U.S. Department of the Interior1849 C Street, N.W.Washington, D.C.   20240

the date on this shows this has been a long haul..