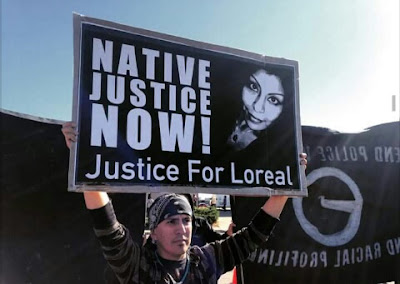 FLAGSTAFF, Ariz. -- In response to ongoing police violence and racial profiling, Flagstaff community members will hold a protest today at 4pm at the County Courthouse lawn (corner of Birch Ave and San Francisco St.). According to the Guardian's The Counted database, Arizona is #4 in police killings so far in 2016, behind California, Texas, and Florida. 27 people have been killed by police in Arizona in 2016 so far, 6 of those shot were Native American. That accounts for nearly half of all police killings of Native Americans in the US.
654 people killed in US by cops so far 2016.
According to the Center on Juvenile and Criminal Justice "The racial group most likely to be killed by law enforcement is Native Americans, followed by African Americans, Latinos, Whites, and Asian Americans."

Join us as we stand in solidarity to end racial profiling and police violence in all our communities. #nativejusticenow #blacklivesmatter