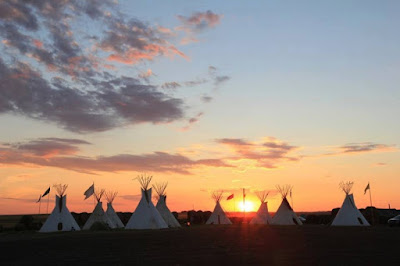 Healing trauma through ceremonies and the foods we eat, elders in the circle at Standing Rock camp

Gathered at night at Standing Stone camp, Frank, an elder, speaks of the trauma of boarding schools.
Frank shares how becoming a spiritual human being is healing and how we can heal ourselves through the foods we eat.
Frank speaks of the trauma of boarding school. His long hair was shaved. He was hit in the head by a nun, and his hearing damaged, because his pencil went into his ear.
"A little boy was killed at this school, there was no investigation."
The little girls were raped over and over.
There was a tunnel, and at the end of the tunnel, there was a little burial place underneath the ground.
"There are little infants laying there from this abuse, this rape."
"I carried these things for a long time."
"Today I have my canupa."
"I came to the ways of my ancestors, and I began to heal."
"Our people have been put through these traumas for a long time."
Frank said he is glad today that there are tribally-run schools. The young ones will not have to go through the abuse of boarding schools.
"We need to heal as human beings."
Frank said we need healing through diet, through what we eat, so we can become spiritual human beings.
"We have to be in balance to sit in the sacred circle."
Speaking of this pipeline, this black snake, that is waiting down the road, Frank said, "This black snake is a sign of the times. We need to prepare ourselves for a new time."
Frank said it was an honor to be here. "This gathering is worldwide, I am honored and privileged to stand beside you for water and for life."
After Frank speaks, an elder water defender shares a story of Frank, and how Frank helped heal him.
This elder tells of one's relationship with fire, and the need to develop a relationship with what is sacred.
As the water protectors were gathered at night in camp, he said, "Tomorrow we have to pray for life."
"When I was in the boarding school, there was no balance."
"We have balance here."
He said the healing is in the ceremonies.
"Sometimes we have to pursue it, sometimes it comes to us."