Construction Shut Down of Dakota Access Pipeline for Now 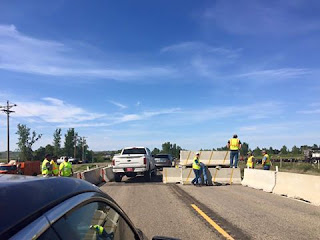 Update Thursday morning, Aug. 18, 2016
"DAPL construction is still going on. The police blocked the highway so that work could continue near Fort Rice. Scouts have reported back that the company is trying to move equipment by barge and float equipment down the river. We need boats on the water."

The Red Warrior Camp camp said, "The Dakota Access Pipeline Project is on hold as of August 17, 2016. Water defenders have responded to a call for warriors to come to the Northern border of the Oceti Sakowin Confederacy to stop the pipeline. That is our purpose here. The Red Warrior Camp has established a home for all who are willing to facilitate Non-Violent Direct Action in peace and prayer to achieve no other goal than to stop the construction of the Dakota Access pipeline. This is a continuation of the actions initiated in early April 2016 by the Sacred Stone Camp.""The Red Warrior Camp condemns the falsehoods and fear mongering that the Morton County Sheriff is exhibiting. There are no guns, or pipe bombs, or weapons of any sort in the entire camp. The Morton County Sheriff is lying so that the foundation can be laid, fraudulently, for law enforcement to escalate the tensions and initiate violence against citizens exercising their basic human and constitutional rights to protect safe drinking water for all in the Missouri River basin."
"The Morton County Sheriff is deliberately or negligently defaming the peaceful character of the camp in order justify a reason to call in the National Guard."
"Calling in the National Guard would relieve Morton County's staffing and financial burden of providing safety for the protestors and the DAPL employees.""Thus far, the activities by the Sacred Stone Camp protestors have included attempts at preventing access to the construction site leading to arrests. There has thus far been one time when the construction was halted, when women, without planning, initiated a direct non-violent action. This is only fitting, as women of all Nations have a sacred connection to water. There are many Tribal Nations and non-Native allies represented in the entire camp. The sole reason 500 people responded to the call for warriors is to come in peace and prayer to stop the pipeline. The Red Warrior Camp stands in solidarity with the Sacred Stone Camp and will continue to stay in 1851 Treaty Territory until the pipeline has been stopped."
Sheriff's press conference
Sheriff Kirchmeier held a press conference Wednesday and announced the Dakota Access Pipeline is halting construction at the site where 28 people have been arrested. Dakota Access Pipeline plans to put a crude oil pipeline under the Missouri River, endangering the peoples water source.Sheriff Kirchmeier said it is an "unlawful protest" and Highway 1806 near Mandan, into the Sacred Stones Camp, is closed and traffic re-routed. He said law enforcement has pulled officers out of the construction site. He claims there has been threats of violence toward officers and construction has been shut down for safety reasons.
Sheriff's claims refuted
However, peaceful water defenders at the site said there was no violence or weapons. They question the strategy that is underway and question the reason for the Sheriff's press conference of misinformation.
Water defenders say the construction was not halted -- just moved to the other side of the river.
From the frontlines at the camp, water defenders responded to the Sheriff's claims.
"Our greatest weapon is spirituality! We came with our Chanupa and our prayers! No guns. No bombs. Water is life," said Phyllis Young.
The water defenders said that in new developments, Dakota Access Pipeline has moved their equipment to another location near Fort Rice.
"Dakota Access Pipeline and Standing Rock Sioux Tribe are in negotiation. Dakota Access Pipeline wants back its heavy duty equipment that were deserted by Dakota Access Pipeline security a couple days ago. Dakota Access Pipeline is proposing to shut down until the August 24th court date in exchange for their equipment."
"Yesterday during the Water Prayer at the river, people -- including children -- had guns pointed at them from Dakota Access Pipeline crews from the east shoreline. A few days ago women who were arrested were bruised and manhandled by Dakota Access Pipeline security and police!"
"But the judge issued a restraining order and said it was to ensure the safety of Dakota Access Pipeline workcrew. Money talks!"
"Again our people are reduced to less than human status by the United States courts." 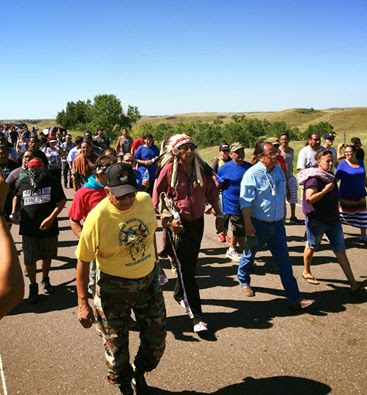 "Water is life!"
Stay camped!
Andrew Ironshell, Lakota, said, "It's better to stay camped, stay put. Eventually the building season will be over, no progress in actual construction of DAPL and we begin to divest the snake at it's weakest point -- in it's wallet."
"Courts are a distraction, stay camped and enjoy being free and united. Lakota territory is a great place to be."
"We will not celebrate until the snake is dead," Ironshell said.
Chief Arvol Looking Horse led marchers to the site today, as water and land defenders poured in to the camp by the hundreds.
Occupation continued today
Videographers at the blockade, Unicorn Riot, reported today that state police began checkpoints, roadblods and psyops, as protesters united to defend water.
The occupations and demonstrations continued today, August 17, 2016."With no police or workers seemingly on site, demonstrations persisted against the Dakota Access Pipeline. Thousands of protesters, including many young children and elders, gathered at the entrance. Tribal members wearing yellow vests safely directed all traffic past the protests, unabated.""After hours of anxiously waiting for construction crews or authorities to arrive, word came that police were setting up concrete road blocks in Mandan, south of Bismarck. Later in the afternoon, Morton County Sheriff Kyle Kirchmeier gave a press conference where he stated that traffic was being restricted to anyone heading towards Standing Rock Reservation and only residents who lived in the area would be allowed through," Unicorn Riot reports."Eventually, protesters entered the construction site without incident in a massive act of non-violent civil disobedience. A group of horses, vehicles, and protesters on foot, ascended on the nearby hill."
Breaking news, please check back.
Oglalas arrive!

Many, many thanks; MUCH RESPECT. Stand strong, we have your backs!

Comment from Shelley Garrett Smith: let me put the dakota pipeline issue into perspective: this is the missouri river watershed. look how many people would be affected if it were turned into a toxic sink ( and all it would take to make an epic disaster is one little flaw in 1,100 miles of pipes ), and THEN it empties into the mississippi river at around st. louis missouri and you have to consider missouri, kentucky, tennessee, arkansas, mississippi, and lousiana. what on earth are the gov. and the people in the oil company thinking! STAND WITH STANDING ROCK, AMERICA!

Exactly! And the communities east river who invested in the Lewis & Clark water project should be concerned.

Before they released the dogs... You can see them mace everyone..frontlines!!

Video of Private Security (GOON SQUAD 2016) at Standing Rock and their Pit Bulls looking to escalate and intimidate through fear all over Big Oil. Americans call it Terrorism. #NoDAPL #YayCapitalism (I tried sharing this video, but wasn't sure if the privacy settings allowed all to see, so I downloaded and uploaded...)