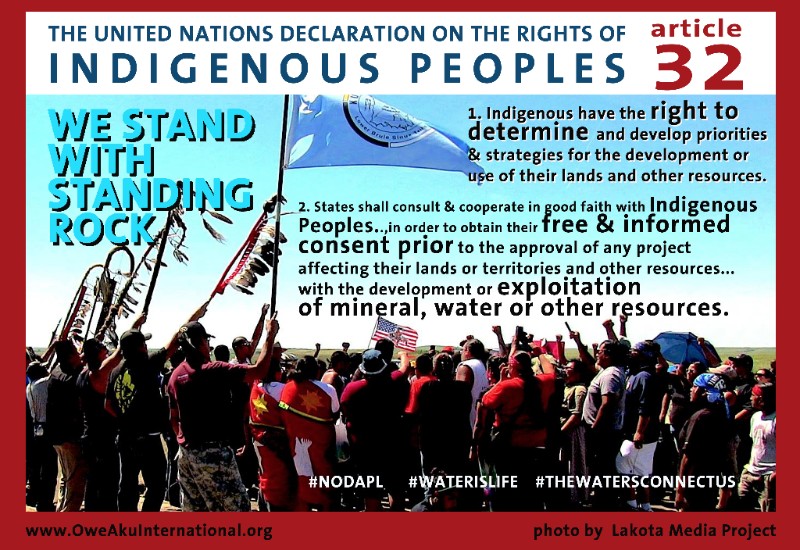 ,
By Red Warrior Camp at Standing Rock
Owe Aku International Justice Dept.
Good people are gathering in Cannon Ball, ND to stop the Blue man, who has come in the form of a poisonous pipeline. Pipelines running under shifting river beds where they cannot be observed, are ticking bombs for the environment and clean water.‪#‎DakotaAccessPipeline‬ ‪#‎NoDapl‬
From Black Elks Vision "I could see the hills and valleys and the creeks and rivers passing under. We came above a place where three streams made a big one--a source of mighty waters--and something terrible was there. Flames were rising from the waters and in the flames a blue man lived. The dust was floating all about him in the air, the grass was short and withered, the trees were wilting, two-legged and four-legged beings lay there thin and panting, and wings too weak to fly.
Then the black horse riders shouted "Hoka hey!" and charged down upon the blue man, but were driven back. And the white troop shouted, charging, and was beaten; then the red troop and the yellow.
And when each had failed. they all cried together: "Eagle Wing Stretches, hurry!" And all the world was filled with voices of all kinds that cheered me, so I charged. I had the cup of water in one hand and in the other was the bow that turned into a spear as the bay and I swooped down, and the spear's head was sharp lightning. It stabbed the blue man's heart, and as it struck I could hear the thunder rolling and many voices that cried "Un-hee!," meaning I had killed. The flames died. The trees and grasses were not withered any more and murmured happily together, and every living being cried in gladness with whatever voice it had. Then the four troops of horse men charged down and struck the dead body of the blue man, counting coup; and suddenly it was only a harmless turtle."
at August 22, 2016