Obama Speaks on Dakota Access Pipeline and Says Nothing 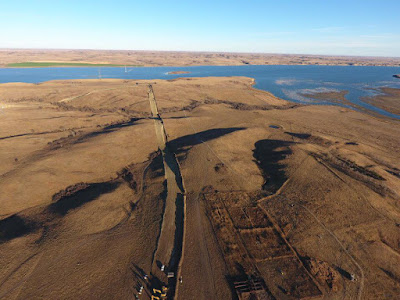 Obama breaks his silence on Dakota Access Pipeline, while hearts are broken at Standing Rock 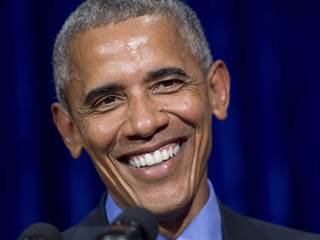 President Obama woke up from his coma on Standing Rock, but he's still trying to fool people by saying nothing.
Obama said he wants the situation to "play out" a little more before doing anything. Play out a little more?
How many Lakota youths on horseback need to be shot with rubber bullets? How many women need to be abused by militarized police and strip searched by Morton County, then placed in dog cages with numbers written on their arms? How many Native elderly need to be arrested in ceremony?
What needs to happen Obama, for it to "play out" a little more?

In typical public relations format, Obama spoke and said nothing.
“We’re monitoring this closely, and you know I think that as a general rule my view is that there is a way for us to accommodate sacred lands of Native Americans,” Obama said in an interview with Now This, shared with MSNBC’s “The Last Word with Lawrence O’Donnell” Tuesday.
“I think that right now the Army Corps [of Engineers] is examining whether there are ways to reroute this pipeline.” “Were going to let it play out for several more weeks and then determine whether or not this can be resolved in a way that I think is properly attentive to traditions of the first Americans,” Obama said, according to The Hill. http://thehill.com/blogs/blog-briefing-room/energy-environment/303912-obama-were-examining-ways-to-reroute-the-nd

Dakota Access Pipeline is almost to the river now, ignoring the request of the Army Corps to voluntarily stop construction. DAPL has enlisted mercenaries, and the corrupt Morton County Sheriff's Department and profiteering Governor of North Dakota, to carry out vicious attacks on water protectors at Standing Rock.
Cheyenne River Sioux Chairman Harold Frazier met with Obama in Los Angeles, just before the militarized police attack on Native Americans and allies at Standing Rock last Thursday. Chairman Frazier appealed to Obama to intervene. Obama refused to help, and instead went golfing and to a $100,000 plate dinner for Democrats.
In May, Obama approved a presidential permit for DAPL owners to cross the border into Mexico with their fracked gas. Energy Transfer Partners bulldozed ancient Indian sites in Big Bend after obtaining Obama's permit. 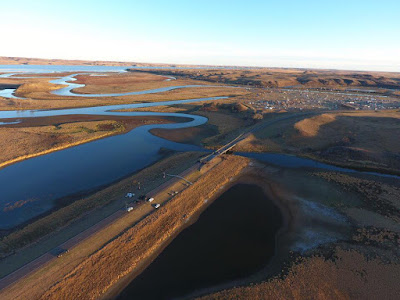 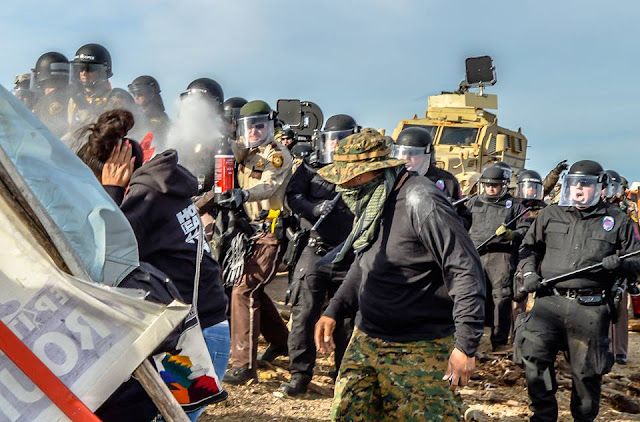 An Officer smiling as he sprays Warrior Women with OC Spray. Photo by Rob Wilson Photography
. 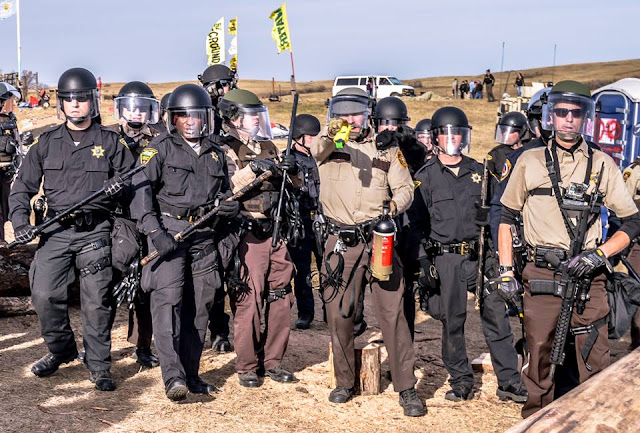 Riot Police moving into the North Camp - this one brandishing both a taser and OC spray. Photo byRob Wilson Photography
.
A Warrior Woman praying before the arrival of a large militarized police force on highway 1806. 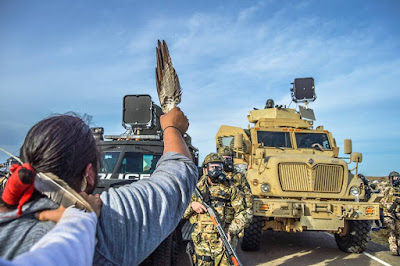 Remaining in prayer as the militarized police force moves in on the Water Protectors on highway 1806. Photo by Rob Wilson Photography
. 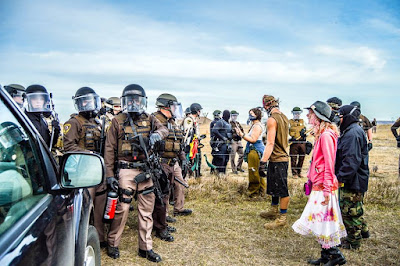 Riot Police pointing me out as I photograph their confrontation with the Water Protectors. Photo byRob Wilson Photography
. 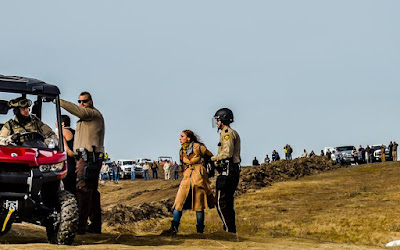 Warrior Women being taken into custody after praying near construction of the Dakota Access Pipeline. Photo by Rob Wilson Photography
. 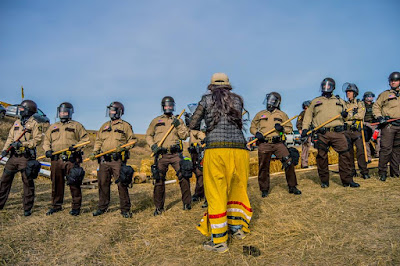 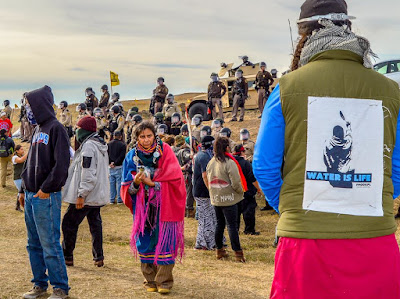 .A Warrior Woman burning sage as the formation of Riot Police decend upon the highway camp. Photo by Rob Wilson Photography 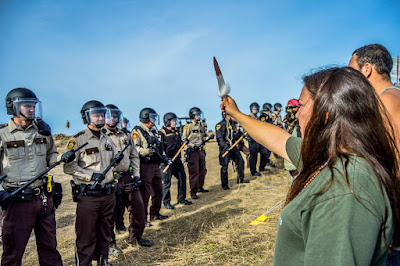 A Warrior Woman holding up a feather in front of a line of Riot Police. Photo by Rob Wilson Photography
. 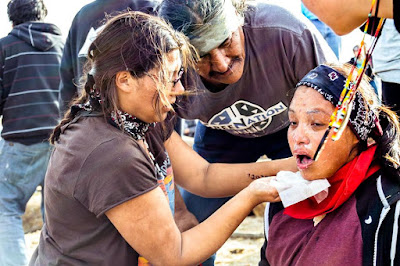 Frontline Medic Kayla Sutherland attending to the needs of a Warrior Woman hit by OC Spray.
. 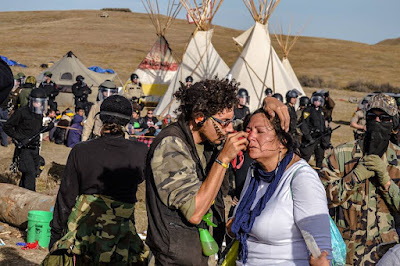 Water Protectors helping each other after police used OC Spray and other less-than-lethal weapons. Photo by Rob Wilson Photography
. 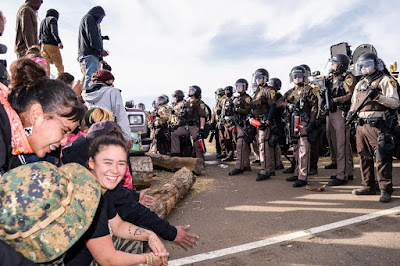 Warrior Women keeping in high spirits as they face an aggressive line of Riot Police. Photo by Rob Wilson Photography 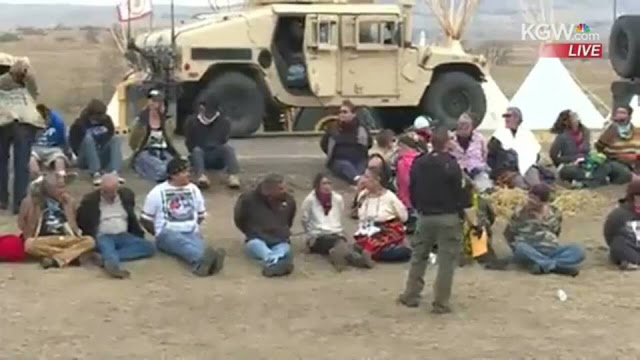 Water protectors caged in dog kennels after arrests on Thursday, Oct. 27, 2016
Numbers were written on their arms, as was done in concentration camps.

MANDAN, North Dakota -- Morton Country Sheriff Kyle Kirchmeier caged Standing Rock water protectors in "dog kennels" and wrote numbers on their arms, as was done in concentration camps.
After being caged in a 'dog kennel' and assigned a number as in the Nazi concentration camps, this water protector, in the video above, describes the heart break of the brutal police attack and arrests of Native American elders on Thursday, Oct. 27, 2016.
"They are good, strong people of our community," she said of the Native elders brutally arrested by police and National Guard. Dakota Access Pipeline is violating all human rights and civil rights as it rushes to complete the last stretch of pipeline construction.
She describes the heartbreak of ceremonial bundles on the ground and elders being arrested with their eagle feathers in their hair.
"No one had guns or anything," she said, describing facing the tear gas, sound cannons, percussion grenades, pepper spray and loaded assault weapons pointed at them.
She describes how the people stood up to the tear gas and the brutality inflicted on them that day, as they defending the sacred places, burial places, and sacred water of the Missouri River.
Then the water protectors, elders and youths, were taken in buses to jail.
"We were caged in dog kennels."
"We sat on the floor."
"We were marked with numbers."
"We were held in the garage."
They put the women in two dog kennels covered with tarps in the garage. They could not see out.
She said she could not wrap her mind around it.
Water protectors had numbers written on their arms, as was done by Nazis in concentration camps.

Morton Country Sheriff and the violent police and National Guard engaged in torture which they placed a hood over a water protector during a lock down to protect the water and burial places. These violent police further engaged in torture by pouring water over handcuffed water protectors in the cold.
http://bsnorrell.blogspot.com/2016/10/war-crime-morton-county-engaged-in.html