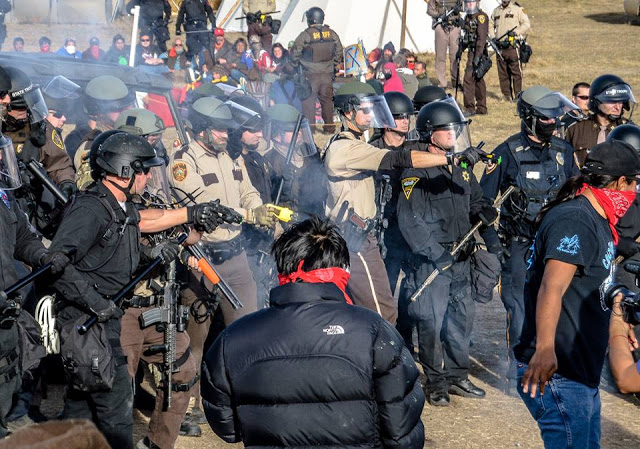 The Water Protector Legal Collective, a National Lawyers Guild-initiated group of volunteer lawyers and legal workers dedicated to defending the rights of the Water Protectors, condemns the U.S. Army Corps of Engineers’ November 25, 2016, letter announcing that it would be closing the portion of Army Corps land currently occupied by the Oceti Sakowin Camp. This letter demonstrates either a stunning ignorance of the current state of affairs in North Dakota or an extreme disregard for the health and safety of the general public, or both.
The “violent confrontations” between “protestors” and law enforcement officers to which the Commander refers are only “confrontations” or “violent” insofar as Water Protectors peacefully assembled in prayer have been repeatedly assaulted by those public safety officials charged with their protection. The events over the past weeks have not been clashes. They have been the unlawful use of excessive force and arrests without probable cause in a vain attempt by local law enforcement to quell Native resistance to the pipeline. As hours of live-streamed videos have shown, the violence over the past months has been perpetrated by law enforcement and DAPL security against unarmed Water Protectors in blatant violation of their constitutional rights and treaty rights. It is even more shameful that the location of all this law enforcement violence, and the area claimed in the Corps’ letter, is land that was recognized as Lakota territory in the 1851 and 1868 Treaties of Fort Laramie.
In support of his decision, the District Commander cites the need for adequate access to “necessary emergency, medical, and fire response services” as well as “sustainable facilities to protect people from these conditions on this property.” Access to emergency, medical, and fire response services has been limited from the time that these camps were founded, as Morton County has made it clear that it only serves its non-indigenous population through its repeated refusal to provide requested or necessary services to Water Protectors. And Morton County has entirely cut off the camps from any emergency services for the past month through its blockade of Highway 1806 at the Back Water Bridge.
In fact, the State’s commitment to depriving the camps of emergency services is so absolute that it committed numerous civil rights and human rights violations to prevent Water Protectors from opening Highway 1806 to traffic once again—including maiming one young Water Protector with an explosive teargas blast grenade; shooting dozens of others with so-called "less lethal" munitions (potentially lethal when misused as they were here); and soaking hundreds of peaceful Water Protectors with water in sub-zero conditions, subjecting them to hypothermia or worse.
Moving Oceti Sakowin roughly 100 yards south, across the Cannonball River, will hardly improve access to Morton County’s emergency response services. Nor will such a minimal relocation do anything to mitigate Morton County’s escalating violence. At most, the District Commander’s proposed action will marginally shift the location of peaceful prayers from the Back Water Bridge to the Cannonball Bridge—and therefore nominally move the location of Morton County’s unconscionable treatment of its indigenous citizens. As Morton County’s aggressive responses to peaceful demonstrators throughout its boundaries demonstrate, it is not the location of Water Protector’s prayers that controls the egregiousness of Morton County’s response.
Most puzzlingly, the Commander’s letter expresses concern over ensuring that the residents of Oceti Sakowin have “sufficient facilities” to weather North Dakota’s harsh winters. Water protectors at Oceti Sakowin have worked for months to adequately prepare for the winter, investing substantial time and expense in the ambitious feat of winterizing the camp. Forcing the many people camped at Oceti Sakowin to move and re-winterize at short notice—in December no less—will jeopardize the safety of thousands of Water Protectors who would be otherwise prepared for the challenging conditions ahead.
The District Commander is absolutely correct in one crucial respect: something must be done to halt the ongoing human rights abuses at Standing Rock. But the District Commander’s proposed action—to invite additional police involvement against the Water Protectors—is not it. If the District Commander is truly concerned about the safety of the Water Protectors, he will ensure that the Dakota Access Pipeline is not constructed. So long as the Dakota Access Pipeline is being constructed, Water Protectors will continue to pray and demonstrate and otherwise participate in protected First Amendment activity. And, as Morton County has made clear, so long as Water Protectors pray and demonstrate, it will continue to perpetrate violence on this community. Finally, if the Dakota Access Pipeline is completed, the health and safety of all residents of this area—including North Dakota’s non-indigenous population—will be put at risk.
We trust that the Army Corps will reevaluate this decision and act in a manner that truly protects the public interest in North Dakota by upholding the First Amendment right to pray, assemble, and protest that is at the heart of democracy, and by making a final decision to not allow the Dakota Access Pipeline to cross the Missouri River. Regardless of the Army Corps' decision, the WPLC will continue to take all appropriate legal action to defend the Water Protectors’ civil and human rights.
Brandy Toelupe, President, on behalf of Water Protector Legal Collective
at November 26, 2016 3 comments: