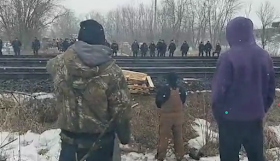 Mohawk Warriors were on the tracks at 11 a.m. today and a train did not stop as it came through the Tyendinaga Mohawk Camp B. Mohawks are standing in solidarity with the Hereditary Chiefs of Wet'suwet'en and their struggle to protect their land from Coastal GasLink pipeline in B.C.
The young Mohawks Warriors would have been killed just now if they had not jumped off the tracks at the last minute, as shown in live coverage here by Real Peoples Media.
"We're standing with them because of climate change," Mohawk Spitting Bear told Censored News just now.
"We have a right to self-determination on our own land. We can ensure biodiversity."
"The world realizes we have the right ideas on environment and forest controlled burns."
"Trudeau's action reflects his relationship with oil and gas. They own him. This is the real threat to humanity."
"Trudeau is fighting back by going after Native People. Using chemical weapons, with tear gas pointed," Spitting Bear said as Belleville Police along the rail tracks held tear gas and weapons pointed at the Tyendinaga Mohawk camp today.
"We manage our relationship with Mother Earth," Spitting Bear said.

Across Canada today, blockades are currently underway at borders, bridges, ports, highways and on the tracks, after Hereditary Chiefs were arrested on Monday and Tuesday at the Secwepemc and Gitxsan rail blockades in B.C.
On Monday, the Tyendinaga Mohawk camp was raided and 10 Warriors were arrested.

Meanwhile, the Premier of Quebec is making false statements about Mohawks having automatic weapons.
Kenneth Deer, a spokesperson for the protesters in Kahnawake, said Legault was making “false statements.”
“We are absolutely shocked and totally dismayed by the comments of Premier Legault,” Deer, secretary of the Mohawk Nation of Kahnawake, told Montreal Gazette.
“I think it’s highly irresponsible. We are totally and absolutely not armed and we don’t intend to be armed.”
Deer said the people of Kahnawake “are committed to a peaceful resolve and continue to support the Wet’suwet’en people in this struggle.”
The Mohawk Council of Kahnawake also denounced Legault’s statements.
“The Premier needs to be far more careful in his actions,” Ietsénhaienhs Kahsennenhawe Sky-Deer said in a statement. “Once certain statements are made, they often can’t be taken back. Using terms like “armed” and “AK-47’s” is extremely inflammatory and, in fact, dangerous. It could be interpreted as an intent to incite a response.”
Speaking in French: "The Sûreté du Québec is slow to intervene to lift the blockade in Kahnawake since residents of the reserve have assault weapons," said Premier François Legault.

Attorney Irinia Ceric said today that it appears that the total number of Wetsuweten Solidarity and 'Shutdown Canada' arrests is 127. This is not including the 29 arrests on #Wetsuweten territory during the enforcement of the CGL injunction. There were 16 arrests at two actions in late January.