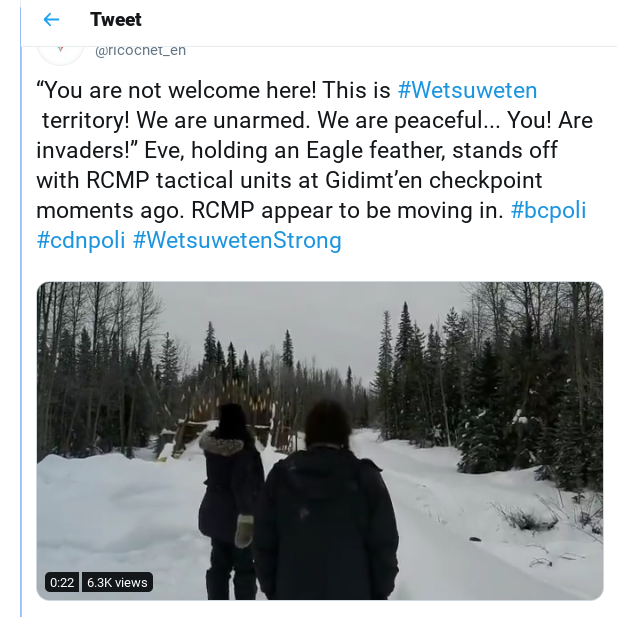 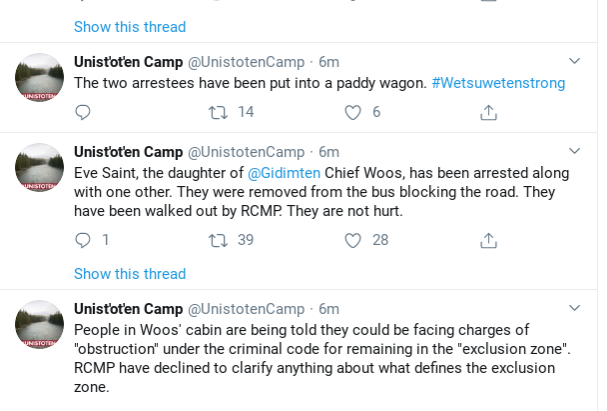 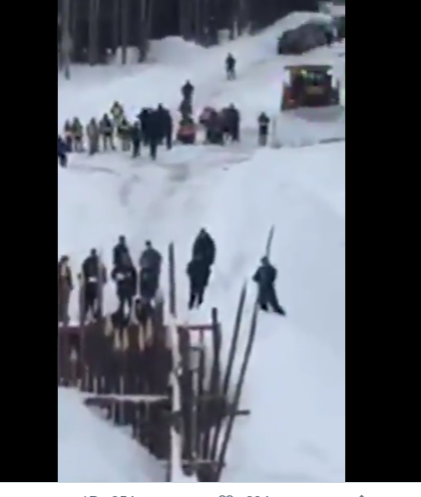 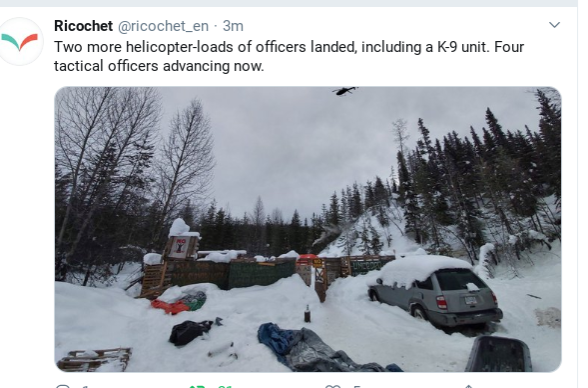 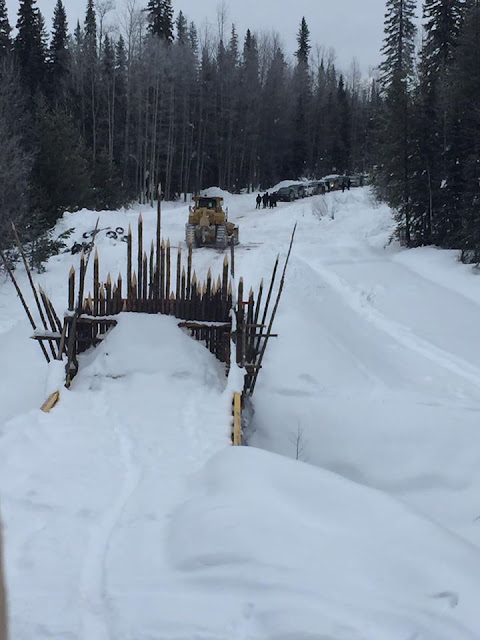 URGENT UPDATES Feb 7, 2020:
11:20 am - A third round of helicopters just dropped off more tactical teams, bringing the total of police behind the Gidimt'en camp anywhere up to 24 if they are dropping off full teams.
11:18 am - "They're reading us the injunction as they're dropping off tactical teams," we just heard from Gidimt'en. RCMP have kettled the camp. 30 police up front, at least a dozen behind.
11:17 am - RCMP are now in front of the Gidimten bridge reading the injunction through a loudspeaker. Two helicopters have landed behind the camp once more, dropping two more tactical teams. 3 to 4 officers getting off each heli - so a dozen or more RCMP are behind them.
11:11 am - Two RCMP helicopters landed behind Gidimt'en and dropped off at least four members of the tactical team, then took off again. Tac team was seen heading into the bush with snowshoes. RCMP has approached the gate again. Gidimt'en checkpoint is now surrounded.
Two snowmobiles are staged in front of the gate, and two tactical teams are staged behind. So the Gidimten camp has been kettled, likely by snipers.
10:59 am - The Gidimten Checkpoint has a visual of RCMP Bronze Commander Rob Pikola. They have now confirmed visual of an officer with an assault rifle. There are now 30 officers counted at Gidimten
checkpoint, including tac team and a commander.
10:57 am - A group of industry workers are inspecting the metal gate to figure out how to get through it. A couple tactical officers were seen moving sleds of equipment that they stashed out of view.
@Gidimten are wondering if the equipment is weapons of some kind.
10:43 am - Officers inspected the Gidimt'en's metal gate, and then retreated it, likely to figure out how to breach it.
10:38 am - RCMP officers have now all lined up at the gate of
@Gidimten checkpoint.
10:33 am - Gidimten can now see 12 vehicles including a bulldozer & ambulance. The bulldozer is clearing right up to the bridge. 1 industry worker is present with 13 officers standing behind them, with likely many more behind them. We're told "we can't see the end of the line of vehicles."
10:19 am - There is now a low-flying chopper overhead as police move in. It is a black chopper, not an RCMP chopper.
10:04 am - can now see three tactical officers.
10:02 am - @Gidimten checkpoint has visual of 14 RCMP including liaisons. One tactical police officer. No assault weapons visible yet, just sidearms.
9:52 am - The plow clearing the road is being escorted into Gidimten by two tactical units and 11 other RCMP.
9:48 am - The RCMP have arrived at Gidimten checkpoint, and are walking into the camp. We've heard 8 regular RCMP and one tactical RCMP officer are on foot.
The plow is moving forward to plow into the gate at 44.
9:39 am - RCMP walking on foot to checkpoint at 44km. A plow is now visible approaching the Gidimten checkpoint, clearing the way for RCMP.
8:45 am - RCMP are apparently idling around the corner from the Gidimten checkpoint. We're hearing reports that they are under drone surveillance. We heard this this morning that the convoy of RCMP was 2km long.
8:15 am - 55 vehicles were seen heading up the road past 27km towards the Gidimten checkpoint. We've just heard 44km can hear RCMP but have no visual.
#WETSUWETENSTRONG
For more updates see Wet'suwet'en Access Point on Gidimt'en Territory
For Gidimt'en's call to action: www.yintahaccess.com
Donate to Gidimt'en camp: https://www.gofundme.com/f/gidimt039en-strong
Unist'ot'en Supporter toolkit: unistoten.camp/supportertoolkit2020/
Unist'ot'en legal fund: https://actionnetwork.org/fundraising/unistoten2020legalfund
at February 07, 2020 No comments:

MNN.  6 FEB. 2020. According to the kaianerekowa, the great peace of turtle island, when the armed enemy invades your territory, it is an act of war.
THE PEOPLE SHALL DEFEND THEMSELVES
Nennen ne katsenhowanen ne wisk nihononwentsakeh enhonnereh ahkayentaneh ne skennenkowa tsinon nihatinakere ne tihononwentsateh tanon yatahontontateh ne ahatiriwayena ne skennenkowa, ne kahti enkarihonni etonnohetste tsi totisenhayen ne wisk nihononwentsaskeh ne enyonteriyo. Tokahti nitsi enhonnesakeh ne wisk nihononwentsakeh nakayentaneh ne skennenkowa, enktotehsakonanontonseh tanon ensakotisenni ne tahotirihoron ne hahotiyentaneh ne skennenkowa. Satekon niwasen
When Canada refuses to accept the great peace, the people have a duty to not allow the outsiders to act aggressively. When an act of war is perpetrated upn us, the war is not oiver until the great peace wins. Everybody’s basic human right in the world is to defend their lives and lands.
MINISTER OF INDIGENOUS AFFAIRS “SOLDIER BOY ” MARC MILLER WIMPS OUT. He, the Band Councils, national and territorial organizations all answer to the the corporation known as of the “Government of Canada”, Inc.1982.
BRITISH COLUMBIA HAS ENACTED THE UN Declaration on the Rights of Indigenous People, Article 26 which provides:
1. Indigenous peoples have the right to the lands, territories & resources which they have traditionally owned, occupied or otherwise used or acquired.
2. Indigenous peoples have the right to own, use, develop and control the lands, territories and resources that they possess by reason of traditional ownership or other traditional occupation or use, as well as those which they have otherwise acquired.
3. States shall give legal recognition and protection to these lands, territories and resources. Such recognition shall be conducted with due respect to the customs, traditions and land tenure systems of the indigenous peoples concerned.
The true indigenous people, the wetsuweten heriditary chiefs, spoke with the British Columbia government. Coastal Gas Link told the BC Government to end the talks because the chiefs weren’t backing down. The talks ended and the next day the heavily armed RCMP and the private security force raided wetsuweten sovereign land and violently removed them. These are numerous violations of international laws and conventions. Canada uses the band councils who are agents of Canada that Parliament created and pay under the illegal Indian Act to be their traitors against their own people. They do not speak for the wetsuweten people under their traditions and customs.
Article 18 confirms that these band councils and Canada are irrelevant:  Indigenous people have the right to participate in decision making in matters which would affect their rights, through representatives chosen by themselves in accordance with their own procedures, as well as to maintain and develop their own decision making institutions. All indigenous people throughout turtle island from pole to pole and ocean to ocean have had this since time immemorial.
MESSAGE TO THE UN: CANADA IS A CORPORATION WHO HAS NEVER FOLLOWED ANY UNITED NATIONS RESOLUTIONS. THEY SHOULD BE JUDGED UPON THEIR ACTIONS AT WETSUWETEN, GUSTAFSEN LAKE, IPPERWASH, OKA AND ALL THE OTHER ILLEGAL LAND THEFTS.
Sadhguru shares the painful story of the onkwehonweh of onowarekeh.
https://bsnorrell.blogspot.com/2020/02/canada-shut-it-down-in-solidarity-with.html
Joni Mitchell sings about the lunacy of war in “Billy Jack. One Tin Soldier”: Go ahead and hate your neighbour. Go ahead and cheat a friend. Do it in the name of heaven.  Justify it in the end. There wont be any trumpets blowing come judgment day. On the bloody morning after, one tin soldier rides away.”
MNN Mohawk Nation News kahentinetha2@protonmail.com  For more news, books, workshops, to donate and sign up for MNN newsletters, go to MNN Archives.  Address:  Box 991, Kahnawake [Quebec, Canada] J0L 1B0 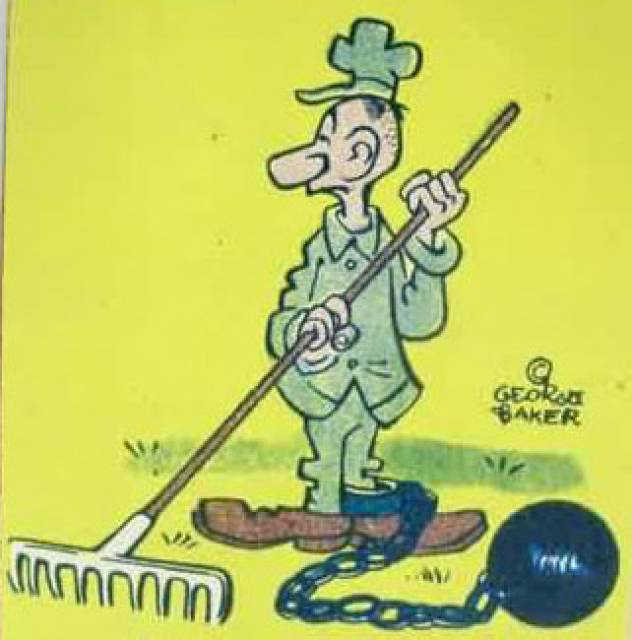 HOW THE TRAITORS WHO WORK FOR THE CROWN LIVE THEIR LIVES.
Censored News 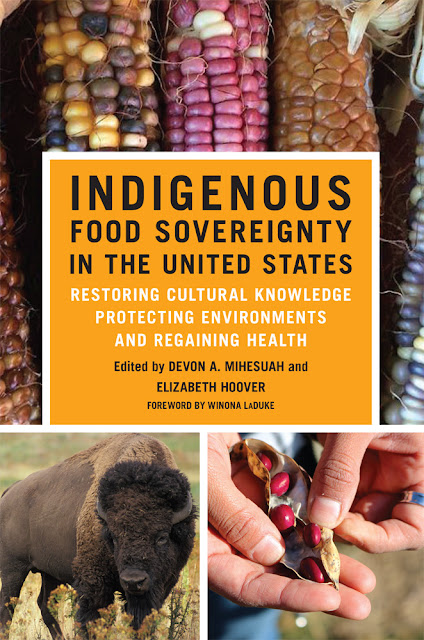 The renaissance of ancestral food: Far from the pages of fancy magazines, the reality of traditional food means eating local with respect, and when necessary, resisting the destruction that threatens the land and water.

Native Chef Nephi Craig is straight-forward about the efforts to celebrate ancestral food in the book Indigenous Food Sovereignty in the United States: Restoring Cultural Knowledge, Protecting the Environment and Regaining Health.

“Come to ground zero and speak about truths while offering solutions – not just speaking about Native foods from a disconnected professional level with a message that is designed to appeal to the colonial culinary elite (Native and non-Native) for the sake of making a name for one’s self, company or organization.”

CANADA -- 'Shut It Down!' in Solidarity with Wet'suwet'en Land Defenders

Below: We're blockading the eastern access to the port at New Brighton in solidarity with the Wet'suwet'en. Our blockade is shutting down the easternmost access to the Vancouver port, while other blockades shut down the Clark Drive and Heatley Drive entrances. 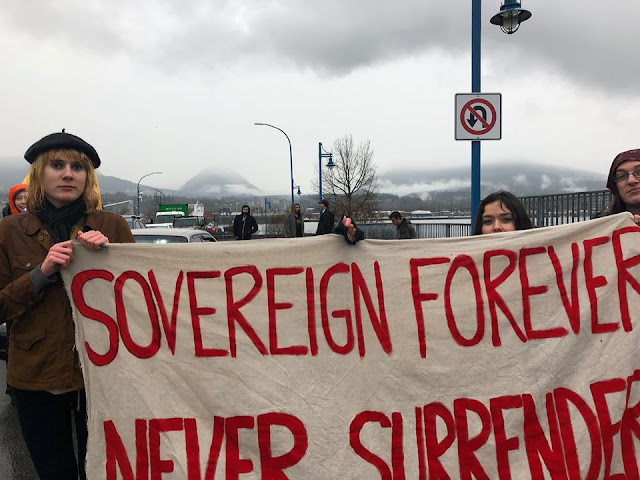 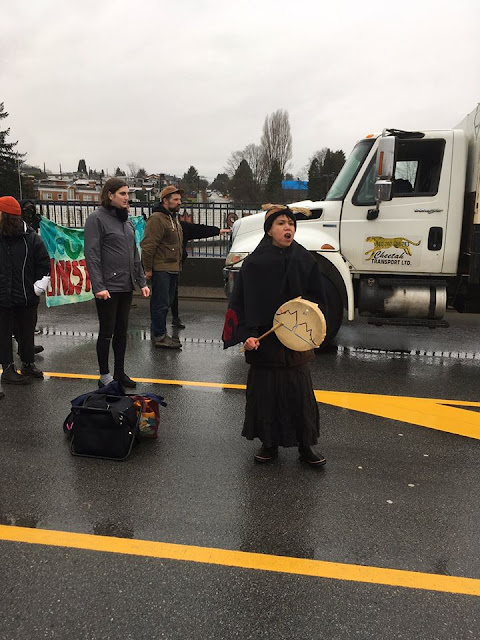 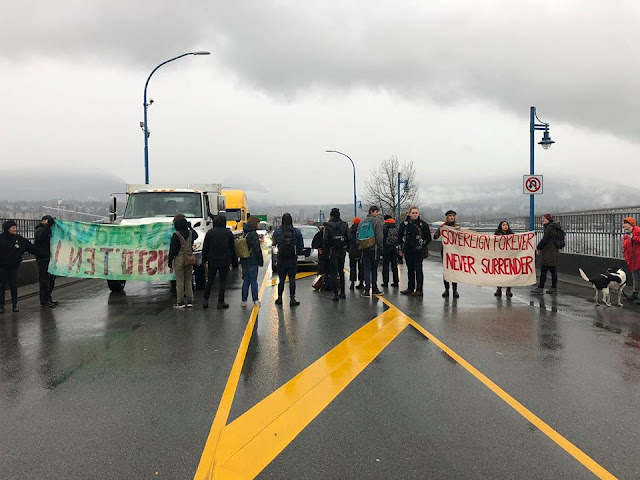 International Solidarity: Time is Now! All out for Wet'suwet'en

The RCMP raid on Wet'suwet'en nation has begun. "We are conducting peaceful actions as sovereign peoples on our territories, and ask that all actions taken in solidarity are conducted peacefully and according to the traditional laws of other Indigenous Nations. Forcible trespass onto Wet’suwet’en territories and the removal of Indigenous peoples from their lands must be stopped. Provincial and federal governments must be confronted."