By Brenda Norrell
Censored News
http://www.bsnorrell.blogspot.com
ALBUQUERQUE -- The Protect the Peaks protest in Albuquerque at the US Forest Service office frightened the Forest Service so much that it shut down, roped off its corridors with police tape and placed police on the roof top.

Louise Benally, Navajo from Big Mountain, Arizona, however, said she was able to enter the building and deliver a letter calling for a halt to the destruction of sacred San Francisco Peaks.
Already, there is clearcutting of the old growth forest for the pipeline of sewage water for snowmaking at the Snowbowl ski resort.
El Grito news covered the protest. "The strength of our heart and our spirit is our prayers, the strength and heart of our prayers is our mountains, and the strength and heart of those mountains is our great spirit," Navajo grassroots organizer Norman Brown told the gathering. "That's how we are tied in to this land. That's how and why we've never given up."
Louise Benally, a Navajo traditional practitioner and resident of the San Francisco Peaks foothills, delivered a letter to the Forest Service, addressed to Corbin Newman, Regional Forester, stating that the federal government is passing judgment on the tribe's religious belief, and failing in its duty as "trustee" to protect "native religions, traditions, and culture that it is otherwise charged to protect."
Read more at El Grito:
http://elgritonm.org/node/1290
Protests were held at Forest Service offices around the west today, including protests in Golden, Colorado, and Vallejo, California, calling for a halt to the destruction of San Francisco Peaks, sacred to 13 Native American Nations. Medicine men gather healing plants on the mountain and hold ceremonies there, where the Snowbowl plans to make snow from wastewater piped in. 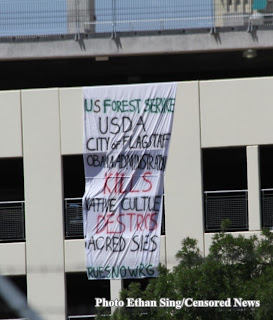 RE: Record of Decision:  Arizona Snowbowl Facilities Improvements and Forest Plan
Amendment #21 by Nora Rasure, Forest Supervisor, February 18, 2005
This letter is presented to you in order to call on you to enact an immediate halt to the destruction and desecration of the Holy San Francisco Peaks, located in Northern Arizona, and to demand that the USDA revoke the Special Use Permit for Arizona Snowbowl for the greater public interest.

The Environmental Impact Statement (EIS) for Arizona Snowbowl is currently under review by the USDA in its Draft Report on Sacred Sites. The EIS details the public outcry about the plan to use treated sewage effluent to make snow to "provide a consistent and reliable ski season" for Arizona Snowbowl. It further states that in an effort to build trust with local Native American tribes the USDA will try to reverse some of the damage caused by decisions that have directly contributed to the desecration of sites held sacred to Native American tribes.

However, at the outset of the 60 day public comment period for the Draft Report on Sacred Sites, Arizona Snowbowl had already began clear cutting 40 acres of rare alpine forest and laying a 15 mile pipeline to carry treated sewage water up the Mountain to manufacture snow. The people who hold this mountain sacred implore you as Regional Forester to step in and make the USDA aware that the very mountain your own report’s claim to protect as a show of trust is being devastated. This will destroy any hope of building trust with tribes in the future.

It should also be noted that the Forest Service has violated the MOA with multiple tribal governments, without any recourse by the Coconino National Forest Service. Your position as Regional Forester obligates you to help provide oversight and protections of tribal interests in this matter. The Final EIS is insufficient, faulty, racist, environmentally unsound, scientifically unsound, and is clearly completely biased towards allowing Snowbowl to expand and use effluent water for snowmaking.

As you can see by the national outcry of resistance to the construction of Snowbowl, the citizens of this country strongly object to the decision to approve the Proposed and Preferred Action. Secretary Thomas J. Vilsack needs to be urged to uphold the Environmentally Preferred Action and it is your job as manager of part of this nation’s forests to encourage him to do so.  We demand that you halt construction if at the very least until the Sacred Sites Report is released and taken into consideration.  The entire East side of the Peaks was lost in a fire and it is the Forest Service’s duty to step in and fulfill their responsibilities in protecting the remaining pure wilderness watersheds, which are so rare in Arizona.

The Forest Service decision to expand Snowbowl is a perfect example of what Executive Order (EO) 12898 was created to stop. EO 12898 is an attempt to stop racism within the Federal Government. To continue this desecration would only continue to perpetrate the racism that has been taking place against the indigenous peoples of this land for centuries. Your own EIS clearly states that this will disproportionately affect and has, since 1938, been disproportionately affecting many Native tribes. Remand this decision, as it violates EO 12898, FS policy regarding EO 12898, and EPA policy regarding EO 12898.


The Forest Service is not delegated with the responsibility of passing judgment on, or measuring the validity of a tribe’s religious belief.  That is, however, exactly what the federal government has done here.  It has forsaken its obligation as “trustee” and effectively undermined the continued viability of native religions, traditions, and culture that it is otherwise charged to protect.  Neither the asserted “improved skiing experience,” nor the undisclosed economic benefit to Arizona Snowbowl Resort Limited Partnership, can legitimately justify the devastating impact this project has on the tribes and on the individuals that hold the San Francisco Peaks sacred.
The Forest Service is mandated with providing recreation, but it does not mandate recreation at the sake of sacred sites and fragile ecosystems. Artificially creating snow goes against this mandated recreation provision by completely ignoring the natural environment that exists within the SUP and has always existed within the SUP. There is no consistent snow on the Peaks as they are in high desert. In order to stay within Forest Service regulations, CNF should be providing recreation that fits the area the CNF is supposed to be managing—not artificially creating an environment that will benefit the owners of Snowbowl.

Mr. Newman, do your part to halt the construction at Snowbowl so that Mr.Vilsack has the option to remand this decision via the Report on Sacred Sites, primarily because it is unhealthy for all living things and will destroy the rarest ecosystem in Arizona. This decision is not only morally and ethically indefensible, the decision at issue: (1) was based on inaccurate and/or incomplete information; (2) is not supported by the record; and (3) was improper as a matter of law and currently has two lawsuits surrounding the project, one versus the US Forest Service and one against the City of Flagstaff.

Your prompt attention to this emergency situation is greatly appreciated.
at August 25, 2011