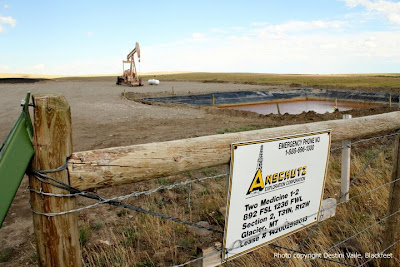 Destini Vaile, Blackfeet: "This well is visible from the road between East Glacier and Browning. I found Bison hair near the flimsy fence. The well pad where this open pit is located sits directly between two wetlands. The tribal government approved on-site open pits, like this one, and metal tanks for storage of fracking liquid, which is a mixture of millions of gallons of our fresh water and a slurry of toxic chemicals. These things do and have overflowed, right here on the reservation."
.
Posted by Censored News, publisher Brenda Norrell at August 07, 2011