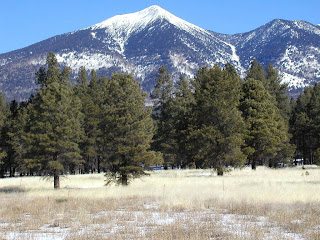 GOLDEN, CO -- On Thursday August 25, 2011, a protest will be held at the US Forest Service's Rocky Mountain Region Headquarters located at 740 Simms Street. The demonstration is being organized as part of a National effort to call for an immediate halt to desecration of the Holy San Francisco Peaks, located in Northern Arizona.

Since May 25, 2011, the owners of Arizona Snowbowl, who lease part of the Peaks from the U.S. Forest Service, have laid over five miles of a 14.8 mile wastewater pipeline and have clearcut over 40 acres of rare alpine forest on the San Francisco Peaks. The ski business expansion includes a controversial plan to make snow from treated sewage on the Holy Mountain.
In 2005, the Southwestern Regional Forester permitted the development after a Coconino Forest Supervisor allowed the plan to go forward despite widespread Tribal and public opposition.
Lawsuits addressing religious freedom and environmental issues were previously filed by Tribes and environmental groups but failed to stop the plan. A current lawsuit against the Forest Service focusing on the human health impacts of wastewater snowmaking is still under appeal in the 9th Circuit Court.
The Peaks are Holy to more than 13 Indigenous Nations. They are a place of worship, a place where deities reside, a place where offerings are made, where herbs are gathered, where emergence has occurred, and a location where other sacred religious practices take place.
On June 16, six people chained themselves to Snowbowl's construction equipment and locked themselves in pipeline trench to stop the desecration. Since then a total of 26 arrests have been made during efforts to halt the eco-cide and desecration of the Holy Mountain. Encampments have also been established to protect the Holy Mountain.
On August 5, 2011, the U.S. Forest Service released a draft report (http://www.fs.fed.us/spf/tribalrelations/sacredsites) outlining its policies and procedures for protecting Sacred Sites. Anyone can comment on the report, the deadline is Oct 4.
"How can the Obama administration's US Department of Agriculture engage in a process to fix sacred sites protection policies while the San Francisco Peaks, holy to 13 Indigenous Nations, are currently being desecrated by the same agency?" states Anna Rondon of Gallup. "We call for an immediate halt to desecration of the Holy Peaks."
On Friday, August 19, the Hopi Tribe has filed suit against the city of Flagstaff for the city's sale of reclaimed wastewater to Arizona Snowbowl. The tribe is asserting that the city's contract to sell water is illegal.
Kristopher Barney, Dine’ (Navajo) & one of the six who locked himself to an excavator on June 16, stated, “This is a continuation of years of prayers and resistance. It is our hope that all Indigenous Peoples, and all others, throughout the North, East, South and West come together to offer support to the San Francisco Peaks and help put a stop to Snowbowl’s plan to further destroy and desecrate such a sacred, beautiful and pristine mountain!”