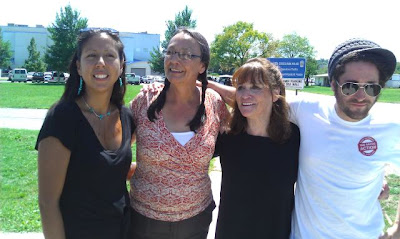 Cree actress Tantoo Cardinal was arrested with Superman's Lois Lane, Margot Kidder, on Tuesday at the White House, protesting the Alberta tar sands destroying her homeland. Cardinal and Kidder are shown with Heather Milton Lightning and Joshua Kahn Russell.
Thousands have agreed to be arrested to halt the tar sands and the Keystone XL Pipestone which would bring this filthy oil from Canada to Texas.
Thanks to Joshua Kahn Russell for sharing this photo and allowing Censored News to publish it!
More photos and video of Tantoo's reasons for protesting and arrest:
http://bsnorrell.blogspot.com/2011/08/video-tantoo-cardinal-arrested-tar.html
Posted by Censored News, publisher Brenda Norrell at August 24, 2011