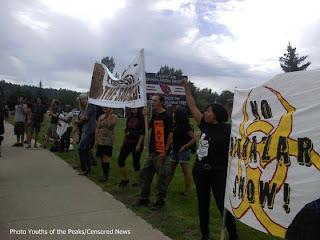 By Brenda Norrell
Censored News
http://www.bsnorrell.blogspot.com
Photo: Youths of the Peaks
FLAGSTAFF, Ariz. -- Defenders of San Francisco Peaks protested outside Flagstaff City Hall on Tuesday, Aug. 9, 2011. San Francisco Peaks are sacred to 13 area Indian Nations who gather healing plants and conduct ceremonies there.
The Snowbowl ski resort plans to use recycled waste water to make snow for tourists. Already the mountain is being clearcut for new Snowbowl development and the sewage water pipeline.
During this week of action, there have been 17 arrests. One arrest at Friday's protest, six arrests during a peaceful march on Sunday and ten on Monday during a lockdown on Snowbowl Road, where the pipeline is going in.
During Sunday's arrest, marchers said organizers were targeted by Flagstaff police and dragged into the street and arrested.
More at:
http://www.truesnow.org
http://www.indigenousaction.org
Posted by Censored News, publisher Brenda Norrell at August 09, 2011