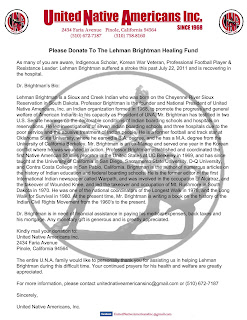 
Please Donate To The Lehman Brightman Healing FundAs many of you are aware, Indigenous Scholar, Korean War Veteran, Professional Football Player & Resistance Leader: Lehman Brightman suffered a stroke this past July 22, 2011 and is recovering inthe hospital. Dr. Brightman’s Bio:Lehman Brightman is a Sioux and Creek Indian who was born on the Cheyenne River SiouxReservation in South Dakota. Professor Brightman is the founder and National President of United Native Americans, Inc. an Indian organization formed in 1968, to promote the progress and general welfare of American Indians. In his capacity as President of UNA, Mr. Brightman has testified in two U.S. Senate hearings on the deplorable conditions of Indian boarding schools and hospitals on reservations. He led investigations of seven Indian boarding schools and three hospitals due to the poor service and the abusive treatment of Indian people. He is a former football and track star at Oklahoma State University, where he earned a B.A. degree, and he has a M.A. degree from the University of California Berkeley. Mr. Brightman is an ex-Marine and served one year in the Korean conflict where he was wounded in action. Professor Brightman established and coordinated the first Native American Studies program in the United States at UC Berkeley in 1969, and has sincetaught at the University of California in San Diego, Sacramento State University, D-Q University, and Contra Costa College in San Pablo, California. Brightman is the author of numerous articles on the history of Indian education and federal boarding schools. He is the former editor of the first International Indian newspaper called Warpath, and was involved in the occupation of Alcatraz, and the takeover of Wounded Knee, and led the takeover and occupation of Mt. Rushmore in South Dakota in 1970. He was one of the national coordinators of the Longest Walk in 1978, and the Long Walk for Survival in 1980. At the present time, Mr. Brightman is writing a book on the history of the Indian Civil Rights Movement from the 1960’s to the present. Dr. Brightman is in need of immediate financial assistance in paying his medical expenses, property taxes and his mortgage to avoid going into default on his home. Any monetary gift is generous and is greatly appreciated. All donations are for Lehman Brightman’s personal expenses. Kindly mail your donation to:Lehman L. BrightmanIn Care Of:United Native Americans Inc.2434 Faria AvenuePinole, California 94564The entire U.N.A. family would like to personally thank you for assisting us in helping Lehman Brightman during this difficult time. Your continued prayers for his health and welfare are greatly appreciated. For more information, please contact unitednativeamericansinc@gmail.com or (510) 672-7187 Sincerely,United Native Americans, Inc.