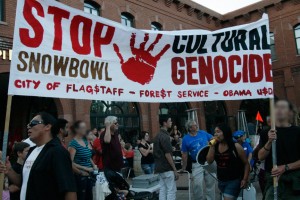 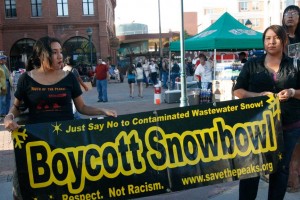 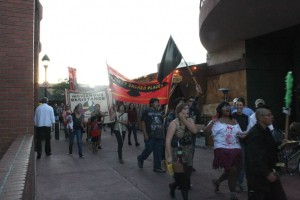 On Friday, August 5th, more than 50 people marched through the streets of downtown Flagstaff to raise awareness of Arizona Snowbowl’s eco-cide and desecration of the Holy San Francisco Peaks. The march was part of a week of action to bring community members together to protect the Peaks.

On May 25th 2011, authorized by the the Obama Administration’s Department of Agriculture and US Forest Service, owners of Arizona Snowbowl began further destruction and desecration of the Holy San Francisco Peaks. Since then Snowbowl’s crew of a handful of workers has laid over 5 miles of the planned 14.8 mile wastewater pipeline. They have cut a six foot wide and eight foot deep gash into the Holy Mountain. Snowbowl is currently in the process of clear-cutting more than 30,000 trees and burning slash-piles.

Before the march began Flagstaff Cops kicked protestors out of Hopi Square, demonstrators continued nearby flyering and engaging in a spontaneous community forum about the issue. 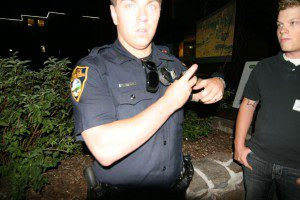 A member of Youth of the Peaks, an Indigenous youth organization, witnessed Flagstaff Police Department Officer Simpson badge #41 texting “dealing with mother f–kers.” A crowd erupted in protest as he was reprimanded by a superior officer. An “official” report of misconduct was later filed against him. 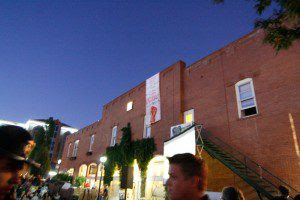 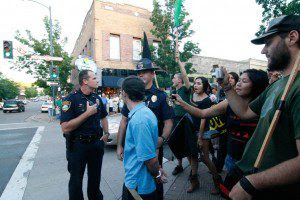 At approximately 7:30PM, as the crowd of 50 marchers crossed Aspen St., a Flagstaff cop grabbed one person from behind and arrested him for “obstructing a public thoroughfare.”
officer. An “official” report of misconduct was later filed against him.
art to “Art Walk” by hanging signs that read, “I love eating poop snow.” 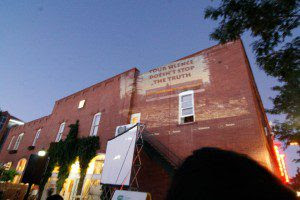 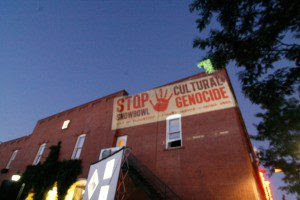 Messages such as, “Your Silence Doesn’t Stop the Truth” were also projected onto buildings along with images of Snowbowl’s recent clear-cutting of the Holy Mountain.
Indigenous youth also held a “Zombie March” with over two dozen young people dressed as Zombies symbolizing the public health threat sewage effluent snowmaking poses.

From August 4-9, 2011 events are planned in Flagstaff, Arizona to protest Snowbowl ski area and the Obama administration’s US Forest Service sanctioned desecration of the holy San Francisco Peaks. 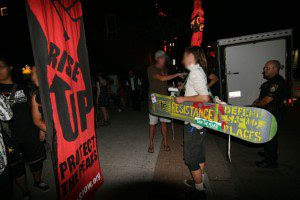 BACKGROUND:
Although a current legal battle is under appeal, Snowbowl owners have chosen to undermine judicial process by rushing to construct the pipeline.
Encampments have been established on the holy Mountain in protest of the destruction and desecration.
All are welcome to camp and bear witness to Snowbowl’s desecration.
For more than a dozen years Indigenous Nations, environmental activists, and concerned community members have worked together to protect the holy site and surrounding area from further ecological destruction, public health threats, and spiritual desecration.
Arizona Snowbowl’s development plans include clear-cutting 74 acres of rare alpine habitat that is home to threatened species, making new runs and lifts, adding more parking lots and building a 14.8 mile buried pipeline to transport up to 180 million gallons (per season) of wastewater to make artificial snow on 205 acres. The Peaks are central to the ways of life of more than 13 Indigenous Nations. The use of wastewater undermines internationally recognized rights of Indigenous people; rights that the Forest Service and administration is obliged to protect.

TAKE ACTION NOW!
Converge on the Mountain!
Join an established base camp or start your own

Contact Flagstaff City Officials and urge them to RESPECT the environment, Indigenous culture, and protect public health by finding a way out of their contract to sell Snowbowl wastewater!
PHONE: (928) 779-7600
EMAIL: council@flagstaffaz.gov
Contact Arizona Department of Environmental Quality and express concern that there was no meaningful public process when the agency approved wastewater for snowmaking. File a complaint and demand full public review!
Arizona Department of Environmental Quality
1110 West Washington Street
Phoenix, Arizona 85007
(800) 234-5677 – Toll Free
Northern Regional Office
1801 West Route 66, Suite 117
Flagstaff, Arizona 86001
(877) 602-3675 – Toll Free
www.azdeq.gov/function/compliance/complaint.html
Contact the US Department of Agriculture (USDA), which heads the Forest Service, and urge them to revoke the Special Use Permit for Arizona Snowbowl for greater public interest.
The USDA has been holding hearings on protection of sacred places due to the Peaks controversy. Urge the USDA to immediately place an administrative hold on all development on the San Francisco Peaks!
CALL CRAIG JOHNSON USFS TRIBAL LIASON IN FLAGSTAFF, AZ AT: 928 525 6578.
Tom Vilsack
U.S. Department of Agriculture
1400 Independence Ave., S.W.
Washington, DC 20250
Phone: 202-720-3631
Email: TribalSacredSites@fs.fed.us
Send Letters to the Editor of your local papers.
Arizona Daily Sun: rwilson@azdailysun.com