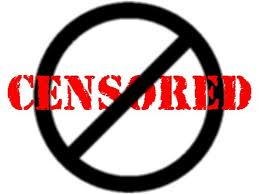 The Arizona Daily Sun in Flagstaff makes a pitiful explanation for its censorship of news coverage of the protests of Protect the Peaks and the 19 arrests in the past nine days.

In Sunday's paper, first the Arizona Daily Sun whines about not having enough reporters. But of course the reporters are out covering other stories.

Then, the Arizona Daily Sun attempts to defame Native Americans struggling to protect their sacred San Francisco Peaks, and insults them.

When all else fails, the Arizona Daily Sun just dismisses the whole thing by saying, "there doesn't appear to be a lot of new news on the horizon."

Well, this may be the most pathetic excuse for censorship in history. It may also be the most pathetic coverup for protecting, and cheerleading, for the business desecrating the sacred San Francisco Peaks, the Arizona Snowbowl ski resort, and its owner, Eric Borowsky, who lives in Scottsdale, not Flagstaff.

Besides covering up for the profiteering Snowbowl, the Arizona Daily Sun covered up for Flagstaff police who targeted organizers in a peaceful march last Sunday, and dragged them out into the street to arrest them.

The pathetic note, in a series of notes, in Sunday's Arizona Daily Sun online can be translated this way: "We aren't going to cover this breaking news, and 19 arrests by sending out a reporter and photographer, because we are a white elitist newspaper and focus on white people and money-making profiteers. We can always come up with an excuse to censor, and cover our backs, because we are the ones publishing this newspaper and no one can force us to abide by the ethics of journalism. We don't really care what local Native Americans have to say because we give priority to white people, and people who are exploiting the natural resources, profiteering from other peoples misery and profiteering from the desecration of their sacred places."

-- Brenda Norrell
(Brenda Norrell, publisher of Censored News, is a former reporter for the Arizona Daily Sun and AP)

NOTE: The reporters were even spoonfed with press statements, video and photos from people on the scene. There is no excuse for this. There was no travel invovled for Arizona Daily Sun reporters to go downtown to the protests. They could have ridden a bicycle. The reporters could even sit in their easy chairs, like many other armchair reporters, publish the press statements, quote from the video, post the free photos, and there you have it, almost a news story.
And of course, there's always the phone call. Along with a free photo, the phone call interview is the perfect reporter coverup for not being there.
--Brenda Norrell
.
at August 14, 2011

I was told by an insider at the paper that they had a meeting in which they "decided" or were told that they wouldn't do intensive coverage until the protests went to the next level. I was reminded of a Phx. t.v. director telling me when we peacefully blocked a road in Grand Canyon to protest a potential uranium mine on sacred Havasupai land 13 miles south of the South Rim, "We covered this one. But if you want us to come all the way up here again, there is going to have to be preoprty damage or someone hurt."