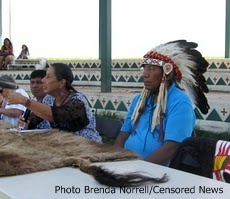 FLAGSTAFF, Ariz. -- The ongoing week of action to halt the desecration of sacred San Francisco Peaks by the Snowbowl ski resort, and the exposure of environmental ecocide in Indian country, as revealed at the Protecting Mother Earth Gathering in North Dakota, are now the top censored issues in the media.

With 17 arrests of Native Americans and supporters since Friday, the Protect the Peaks movement in Flagstaff, Arizona, is more resolute than ever. In North Dakota, the Protect Mother Earth Gathering brought Indigenous Peoples from the US, Canada, Mexico and Guatemala, together to speak of environmental racism and what the future holds if humanity does not halt its mass consumerism and destruction of Mother Earth.

The oil and gas drilling industry continues its raid on Indian country, while coal-fired power plants continue to poison the air, land and water. Coal-fired power plants are a primary causes of the melting of the Arctic, as Native villages crash into the ocean and polar bears and other wildlife dies from the loss of habitat.

With the growing movements for action, those opposing the dirty tar sands in Alberta are organizing civil disobedience in Washington DC. The action is to send a message to President Obama about the proposed XL Pipeline to carry dirty oil from Canada to the Gulf Coast.

While newspapers collapse, the media fails with its final breaths to carry out its ethical duty to report the facts as they happen. Here are the top stories from Censored News, including the original breaking news story from Destini Vaile, Blackfeet, on the Cut Bank oil spill:

Mayan in Guatemala: Seeds, ceremonies and the Year 2012
http://bsnorrell.blogspot.com/2011/07/maya-in-guatemala-seeds-ceremonies-and.html