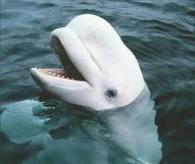 Alaska's Big Village Network, Center for Water Advocacy, Cook Inlet Tribes, hunters, fisher peoples, and citizens are concerned about the critical habitat and actual recovery of Cook Inlet Beluga Whales in Escopeta's rush for oil and gas activity. Questions of profound concern linger over the decline of Cook Inlet eulachon fishes since the Exxon Valdez oil spill. These fish are one of the major food species for humans and Cook Inlet Beluga Whales


ANCHORAGE -- Today, the Pacific States/BC Oil spill task force meetings are taking place in Anchorage. These meetings will address the Pacific States and British Columbia, US and Canadian preparedness for preventing oil spills and blowouts offshore. This meeting is setting the framework for and emerging discussion amongst Native Villages, Tribal governments, conservation organizations and other stakeholders about oil spill and blow out preparedness in Cook Inlet.

MaryAnn Mills, chair of Cook Inlet Treaty Tribes, said, "The Cook Inlet Tribes have not been formally notified or consulted with regard to the Escopeta Company activity in the Cook Inlet. The traditional hunters have not hunted for many years and the beluga numbers have not significantly changed. This leads many to realize other things are going on in the Cook Inlet that is stressing the beluga and other ocean life. The traditional hunters cannot hunt but it seems that industry has no problem on permits to incidental take, and to harass endangered Cook Inlet Beluga Whales."


John French PhD., Pegasus Environmental Solutions, Alaska, said, “Between March 2010 and July 2011, 438 dead bottlenose dolphins have been found stranded in the area of the BP Deepwater Horizon event. This compares to an average of104.7 for normal years. Also from January to July 2011, 85 of these were premature, stillborn, or neonatal bottlenose dolphins as compared to only 12.5 for the average of normal years. These calves would have been fetuses during the oil release and response. The cause of this Unusual Mortality Event is still listed as unknown. We should not ignore the possibility that these marine mammals deaths were caused by the spilled oil, or by spill response activities. We should not proceed with oil and gas development activities in critical habitat areas for protected marine mammal species until we know for certain this UME was not caused by these activities.”

Escopeta Company is rushing oil and gas activity by pushing a jack –up Spartan 151 drill rig into critical Cook Inlet Beluga Whale Habitat for a "Cash Prize" from the State of Alaska with little or no Federal or State oversight, especially considering the State of Alaska recently dumped the Alaska Coastal Management Program. Oil spill contingency plans are thus questioned in Cook Inlet, and in the Arctic Beaufort and Chukchi Seas.

Alaska's Big Village Network, Center for Water Advocacy, Cook Inlet Tribes, hunters, fisher peoples, and citizens are concerned about the critical habitat and actual recovery of Cook Inlet Beluga Whales in Escopeta’s rush for oil and gas activity. Questions of profound concern linger over the decline of Cook Inlet eulachon fishes since the Exxon Valdez oil spill. These fish are one of the major food species for humans and Cook Inlet Beluga Whales.

Carl Wassailed Biologist of Alaska’s Big Village Network said, “Scientist have yet to determine Marine noise pollution impacts, like new drilling rigs, on young Cook Inlet Beluga Whales that frequent inland waters to escape natural predation by killer whales. And this time of year many belugas are foraging on multiple species of salmon as they migrate to spawning rivers and streams in Cook Inlet."

Harold Shepherd Water Policy Consultant said, “Until just recently it appeared National Marine Fisheries Service was the only governmental agency that was concerned about an oil spill blowout regarding the Cook Inlet Beluga Whales and suddenly we hear yesterday that Senator Begich and NOAA Director Dr. Lubchenko are meeting with the stakeholders of the oil and gas industry to streamline the permitting process. It sounds like NMFS has done an about face on oil spill contingency planning in Cook Inlet."

"Environmental Impact Statements (EIS) were done on our Beluga Whale hunters, even after 10 years of standing down on the harvest; why does Escopeta get to rush a drilling rig with NO updated Environmental Impact Statement, and no notification to Tribal governments or Tribal communities? This action clearly and disproportionately burdens the indigenous peoples of Cook Inlet whom have used and occupied the historic waters of Cook Inlet for customary and traditional hunting, fishing and gathering, commerce and navigation since time immemorial."

The adverse cumulative impacts, risk assessments and oil spill contingency plans are inadequate for Cook Inlet, an Historical Bay. There is national and international interest in following federal in protecting invaluable natural resources.

Contact:
Nikos Pastos Board Treasurer Center for Water Advocacy, Homer Alaska http://www.centerforwateradvocacy.org/
907-764-2561
Carl Wassilie Biologist Alaska’s Big Village Network Anchorage, Alaska http://www.akbigvillagenetwork.blogspot.com/
907-382-3403
FOOTNOTES:
ESCOPETA notice requirements were supposed to have been provided to the Cook Inlet Villages and their Cook Inlet Marine Mammal Council regarding the Spartan 151 Jack-up rig. This requirement is contained in the Alaska Coastal Management Programs' Escopeta North Cook Inlet (Offshore), Kitchen Prospect Exploration State ID N0, and AK2006-0201OG Final Consistency Determination which states on page 6:
"2. Escopeta Oil & Gas Corporation will coordination with the Native Village of Tyrone, The Kenai Peninsula Borough Coastal Management Program, the Cook Inlet Marine Mammal Council (and others as per Escopeta's Plan of Operations) to ensure that Escopeta's activities avoid and minimize potential adverse impacts to Beluga whales; the availability of fish and wildlife for commercial and subsistence uses; as well as the quality of life for Alaskans.
3. Commercial, sport and subsistence interests stakeholders who have expressed interest during the company's outreach programs will be notified by Escopeta at least 48 hours before transport of the drilling vessel in Cook Inlet waters...."