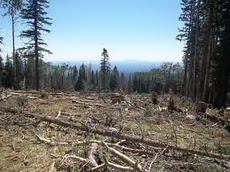 Please find enclosed a copy of a letter being submitted to your colleague Corbin Newman,

Southwest Regional Forester. We ask that you follow up with him on this issue as a matter

of urgency, and see that the Arizona Snowbowl development is immediately halted, so that


The San Francisco Peaks, in Northern Arizona, are Holy to more than 13 Indigenous

Nations. They are a place of worship, where deities reside, offerings are made, herbs are

Today marks the third month since owners of Arizona Snowbowl, with the support of the

of a private ski area. In 2005, the Southwestern Regional Forest Service permitted the

development despite widespread Tribal and public opposition. So far, this has enabled

them to lay over five miles of a 14.8 mile wastewater pipeline and clearcut over 40 acres of

rare alpine forest on the San Francisco Peaks, less than half of the project. The expansion

includes a controversial plan to use treated sewage water for snowmaking. We demand that

you end this desecration and ecocide.

The US Department of Agriculture, which includes the Forest Service, is currently engaging

in a consultation about sacred sites, a draft report can be found at, http://www.fs.fed.us/

spf/tribalrelations/sacredsites. As your constituents we would like to see you work for

change within the Forestry Service, that includes observing Article 12 of the United Nations

Declaration on the Rights of Indigenous Peoples, which says ‘ Indigenous peoples have

the right to manifest, practise, develop and teach their spiritual and religious

traditions, customs and ceremonies; the right to maintain, protect, and have

real and effective public and tribal consultation, and accountability when this does not

‘Caring for the land and serving people’ is the motto of the US Forest Service,

but the desecration of the Holy San Francisco Peaks does neither. We ask that

desecration of this sacred mountain.