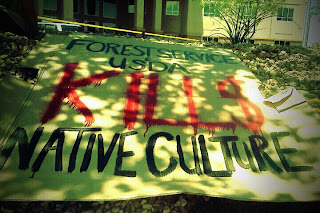 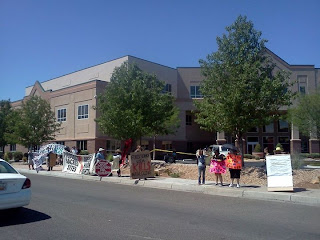 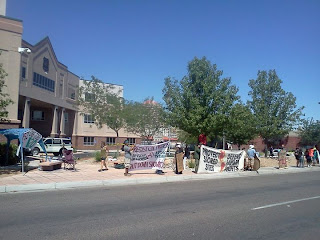 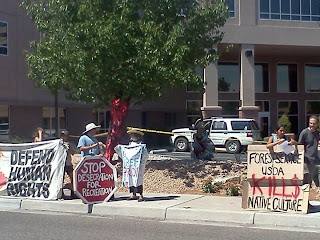 Albuquerque: Protect the Peaks protest of the US Forest Service. Photos by Protect the Peaks/Outta Your Backpack Media
Article update at:
http://bsnorrell.blogspot.com/2011/08/albuquerque-forest-service-shuts-down.html
Greetings folks,
I know you are very busy. But if you have time, unless you are already protesting the Forest Service, you are welcome to add your name to this letter (its from individuals, not an organization).
We will also be making this letter available for folks to sign online at www.truesnow.org as well.
Please respond ASAP as we have someone ready to deliver it in DC.
Thanks!
- Klee
Tom Vilsack
Secretary of Agriculture
U.S. Department of Agriculture
1400 Independence Ave., S.W.
Washington, DC 20250

RE: Protect the San Francisco Peaks. Halt the Ecological Destruction and Desecration!
Dear Secretary Vilsack,
We, the undersigned, are deeply disappointed by the U.S. Department of Agriculture’s decision to allow Arizona Snowbowl to proceed with expansion and snowmaking with treated sewage effluent on the Holy San Francisco Peaks. This action is in blatant disregard for Indigenous People’s deeply held cultural & religious beliefs, community health, and the environmental integrity of the sensitive mountain ecosystem.
Snowbowl is a private, for profit, ski area using the San Francisco peaks under a Special Use Permit issued by the U.S. Forest Service. We maintain that the expansion of this resort and wastewater snowmaking is not in the public’s greatest interest.
The Final Environmental Impact Statement (FEIS) reveals:
The ski area plan would "further contaminate the spiritual purity of the entire Peaks beyond the historic and existing levels." - Final Environmental Impact Statement Vol 1 Page 3-18

"Snowmaking and expansion of facilities, especially the use of reclaimed water, would contaminate the natural resources needed to perform the required ceremonies that have been, and continue to be, the basis for the cultural identity for many of these tribes." - Final Environmental Impact Statement Vol 1 Page 3-18
"The proposed action would represent the highest degree of potential disproportionate adverse impact to Native American cultures." - Final Environmental Impact Statement Vol 1 Page 3-370
The current Draft Report on Sacred Sites goes to great lengths to explain the public outcry about the plan to use treated sewage effluent to make snow to "provide a consistent and reliable ski season" for Arizona Snowbowl. It states that a good way to build trust with the tribes is to try to reverse some of the damage caused by poorly made decisions to desecrate sacred sites.

However, even as the 60 day public comment period began for the Draft Report on Sacred Sites, Arizona Snowbowl was busy clearcutting 40 acres of rare alpine forest and laying a pipeline to carry treated sewer water roughly 15 miles up the Mountain to make fake snow.
The very mountain your own reports seem to want to protect--as a show of trust--is being absolutely devastated by Arizona Snowbowl in an apparent effort to circumvent this same sacred sites report and pending lawsuits against the project. And in essence goes quite a way in destroying any hopes of trust in the future. How can the USDA engage in a process to fix sacred sites protection policies while the San Francisco Peaks, holy to 13 Indigenous Nations, are currently being desecrated?
We urge you to take the following steps to protect the San Francisco Peaks:
Immediately create a moratorium on all construction on the San Francisco Peaks until the Sacred Sites Report is finalized and you are able to read it and make some informed decisions.

Terminate Snowbowl’s Special Use Permit (SUP) and make it part of the Kachina Peaks Wilderness Area.
Above all please do not allow treated sewage effluent to be sprayed on the pinnacle of Arizona.
It should also be noted that the 2004 Memorandum of Agreement between the Forest Service and multiple tribal governments has been violated without any recourse by the Coconino National Forest.

We additionally urge you to uphold previous agreements with Tribes and maintain oversight and protections of tribal interests in this matter.

The FS decision to expand Snowbowl is a perfect example of what EO 12898 was created to stop. To continue this desecration would only continue what has been happening to the indigenous peoples of this land for centuries. EO 12898 is an attempt to stop Racism & Classism within the Federal Government. Your own EIS clearly states that this will disproportionately affect and has (since 1938) been disproportionately affecting many native tribes. Please remand this decision because it violates EO 12898, FS policy regarding EO 12898, and EPA policy regarding EO 12898.
Neither the asserted “improved skiing experience,” nor the undisclosed economic benefit to Arizona Snowbowl Resort Limited Partnership, can legitimately justify the devastating impact this project has on the tribes and on the individuals that hold the San Francisco Peaks sacred.
By focusing narrowly on a purpose and need to improve Snowbowl’s financial viability, the FS simply uses the National Environmental Policy Act process to overcome any and all obstacles relative to that goal, including identified irreversible and irretrievable impacts to the environment and disproportionally adverse effects to Native Americans. The agency has stated its goals so narrowly that there are actually no environmentally benign alternatives that can accomplish them. Indeed, the only alternative considered that could meet these goals was the selected Alternative 2.

The Forest Service is mandated with providing recreation, but it does not say that you are supposed to fake it. Artificially creating snow goes against this mandated recreation provision by completely ignoring the natural environment that exists within the SUP and has always existed within the SUP. Of course there is not consistent snow here, we live in a high desert. In order to stay within FS regulations, CNF should be providing recreation that fits the area the CNF is supposed to be managing—not artificially creating an environment that will benefit the owners of Snowbowl.
Please immediately halt Snowbowl construction as it is unhealthy for all living things. This decision is not only morally and ethically indefensible, the decision at issue: (1) was based on inaccurate and/or incomplete information; (2) is not supported by the record; and (3) was improper as a matter of law and currently has two lawsuits surrounding the project. One vs the US Forest Service, and one against the City of Flagstaff.
We appreciate your prompt attention to this emergency situation.
Sincerely,
Posted by Censored News, publisher Brenda Norrell at August 25, 2011