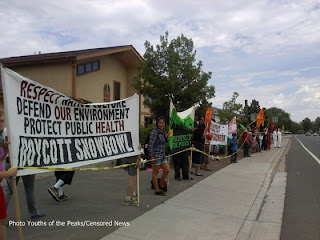 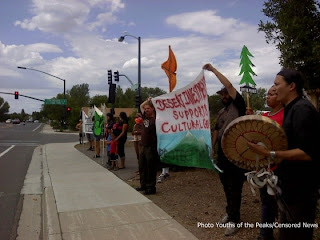 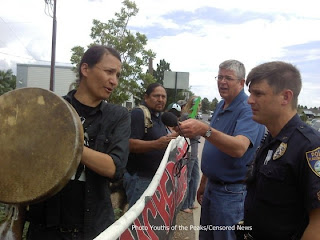 Protest today to protect sacred San Francisco Peaks! Protest now at High Desert Investment Company in Flagstaff, Arizona. There's no stopping 'em! One arrest on Friday, six arrests on Sunday and 10 arrests on Monday! Thanks to Youths of the Peaks for the photos for Censored News! In these photos is Klee Benally, Navajo, who was arrested Sunday. Eye witnesses said Flagstaff police targeted Protect the Peaks organizers and dragged them off the sidewalk to arrest them.
According to Flagstaff's corporate newspaper, Arizona Daily Sun, the Snowbowl was cleared in May to construct new ski runs, which includes clearcut logging for a summer hiking trail and to combine two parking lots.The Flagstaff business High Desert Investment Company is logging the area, resulting in the clearcutting of grandmother, old growth trees on sacred San Francisco Peaks.
.
Show support for Indigenous Action, independent Native American media in Flagstaff:
http://www.indigenousaction.org/
Donate if you can to Indigenous Action or True Snow,  www.truesnow.org to help with bail and legal expenses.
Posted by Censored News, publisher Brenda Norrell at August 09, 2011