WASHINGTON, DC – America’s top climate scientist and a large group of religious leaders were arrested at the White House this morning with 140 other Americans to push President Obama to deny the permit for a massive new oil pipeline. (1)
“If Obama chooses the dirty needle it will confirm that the President was just green-washing all along, like the other well-oiled coal-fired politicians, with no real intention of solving the addiction,” said NASA’s Dr. James Hansen, who was arrested at the White House this morning.
President Obama must decide whether or not to grant a “presidential permit” for a Canadian company, TransCanada, to begin construction of the Keystone XL, a 1,700 mile pipeline from the Canadian tar sands to refineries on the Gulf of Mexico.
Earlier this summer, Dr. Hansen and twenty other leading scientists sent a letter to the White House urging the President to prevent the construction of the Keystone XL pipeline, writing: “If the pipeline is to be built, you as president have to declare that it is ‘in the national interest.’ As scientists, speaking for ourselves and not for any of our institutions, we can say categorically that it’s not only not in the national interest, it’s also not in the planet’s best interest.” (2)

Best-selling evangelical author Jim Wallis, who recently served on President Obama’s Advisory Council on Faith-based and Neighborhood Partnerships, sent a message of support to the protesters.
“American Christians are demanding a new direction in America’s energy future — one that marks our turn away from oil and fossil fuels and toward cleaner and renewable energy sources,” wrote Wallis. “Developing the tar sands in Canada and building the Keystone XL pipeline through six states in the American Midwest is the wrong direction for our country and derails progress of building a responsible energy infrastructure.”
“Climate change hurts the poor first,” said Rose Berger, a Roman Catholic and editor at Sojourners magazine who led a large delegation of religious leaders participating in the protest and was arrested this morning. “The tar sands development and the permitting the Keystone XL pipeline will worsen climate change and should be stopped.”
“We must turn up the heat in a sustained effort against the scourge of climate change, which harms not just our land and water but people here and now, our human future and all earthly creation,” said Rabbi Fred Scherlinder Dobb of Adat Shalom Reconstructionist congregation in Bethesda, MD.
The executive directors of Greenpeace and 350.org, as well as the President of CREDO Mobile, also took part in today’s sit-in. So far, the ongoing White House protest that began on Saturday, Aug 21st has led to the arrest of over 500 Americans. The protest will continue until September 3rd with large crowds expected each day.
Photos at tarsandsaction.org
###
CONTACT: Daniel Kessler, 510-501-1779, daniel@ran.org; Jamie Henn, 415-601-9337, jamie@tarsandsaction.org
Notes:
1. To date 521 people have been arrested protesting the White House.
2. http://www.tarsandsaction.org/scientists-keystone-xl-obama/
at August 29, 2011 No comments: 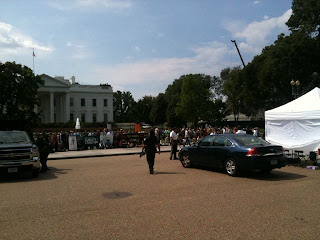 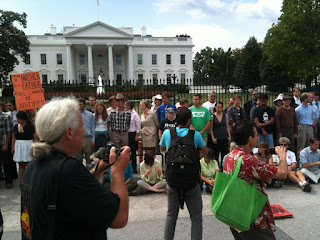 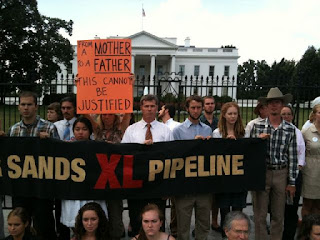 BREAKING NEWS: 143 ready to be arrested, biggest crowd by far yet!
Big crowd ready to be arrested at the White House. Halt the Tar Sands Pipeline. Already 381 people arrested. Hello President Obama! (Are you back from your 10 day vacation?) The Indigenous Environmental Network joins the sit in on Friday to halt the destruction of the Cree homelands in Alberta and the proposed pipeline that would endanger more Indian lands and water sources in Canada and the US. Photographers say crowd today to huge to get a photo of everyone! Photo credit: Tar Sands Action.
at August 29, 2011 No comments: